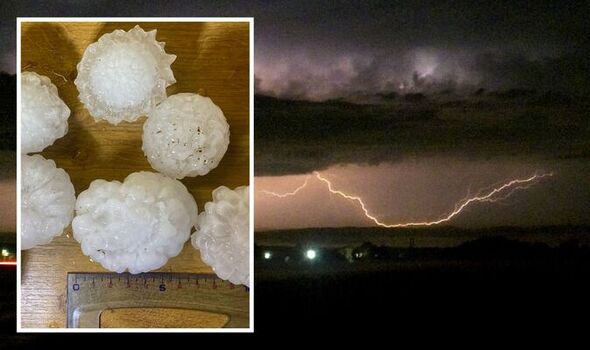 It comes as rain and thunderstorms are also predicted for the UK this week, with flooding, travel disruptions, and power cuts seen as possible. During a press briefing on the devastating impact of the extreme weather conditions, the French Minister of Interior, Gérald Darmanin, said 15,000 households were left without electricity.

In the northern French city Rouen, where the thunderstorms were severe, a woman lost her life as she was swept away by a mudslide and drowned, 20 minutes France reported.

The city’s mayor said the event was “a terrible tragedy”.

Another victim of the phenomena was a young boy, 13, living in Indre-et-Loire, who has been hospitalised and is in critical condition.

The French daily newspaper Le Figaro reported the child tried to cross the road when a motorist, who did not see him because of the heavy rain, struck him causing serious injuries.

According to Mr Darmanin, the effect of the storm was the worst and most extensive the country has seen in 20 years.

The intense rainstorm carried on for several hours, while hail was also pouring down in several areas of the country.

At the same time, more than 50,000 lightning discharges struck the French soil in 24 hours on Saturday, in what was deemed as “the most electric day” of the year.

Among the damage caused, the Minister mentioned “engineering structures”, including bridges “washed away” in Mayenne, and also wine crops, especially in the Landes and Gers.

Streets transformed into torrents as roads were heavily damaged in Rouen, with the city’s Mayor stating: “This umpteenth episode of violent bad weather once again raises the problem of water runoff and soil artificialisation, which is the cause of these mudslides.”

Dikes and retention basins have also been damaged, with extensive repair work required.

On Sunday, train traffic remained severely disrupted for several hours on the rail network to and from the Gare du Nord in Paris.

The intense thunderstorms came after the affected areas experienced very hot weather, unusual for this time of year, with some specialists claiming that these are part of the extreme events that we must now expect due to climate change, according to Le Figaro.

Extreme weather conditions also affected areas of Belgium, with people in the province of Liege seeing the heaviest impact.

On Sunday, firefighters were constantly called to assist in incidents of flooded roads, uprooted trees, and water infiltration in buildings.

Extensive flooding and several road closures were also seen in the villages of Crehen, Avin, Grand-Hallet and Cras-Avernas.