HONG KONG (Reuters) – Support for the demands of pro-democracy protesters in Hong Kong has grown even as rallies have paused due to the coronavirus outbreak, according to a survey conducted for Reuters that also showed a widespread lack of confidence in the government’s ability to manage the COVID-19 crisis. 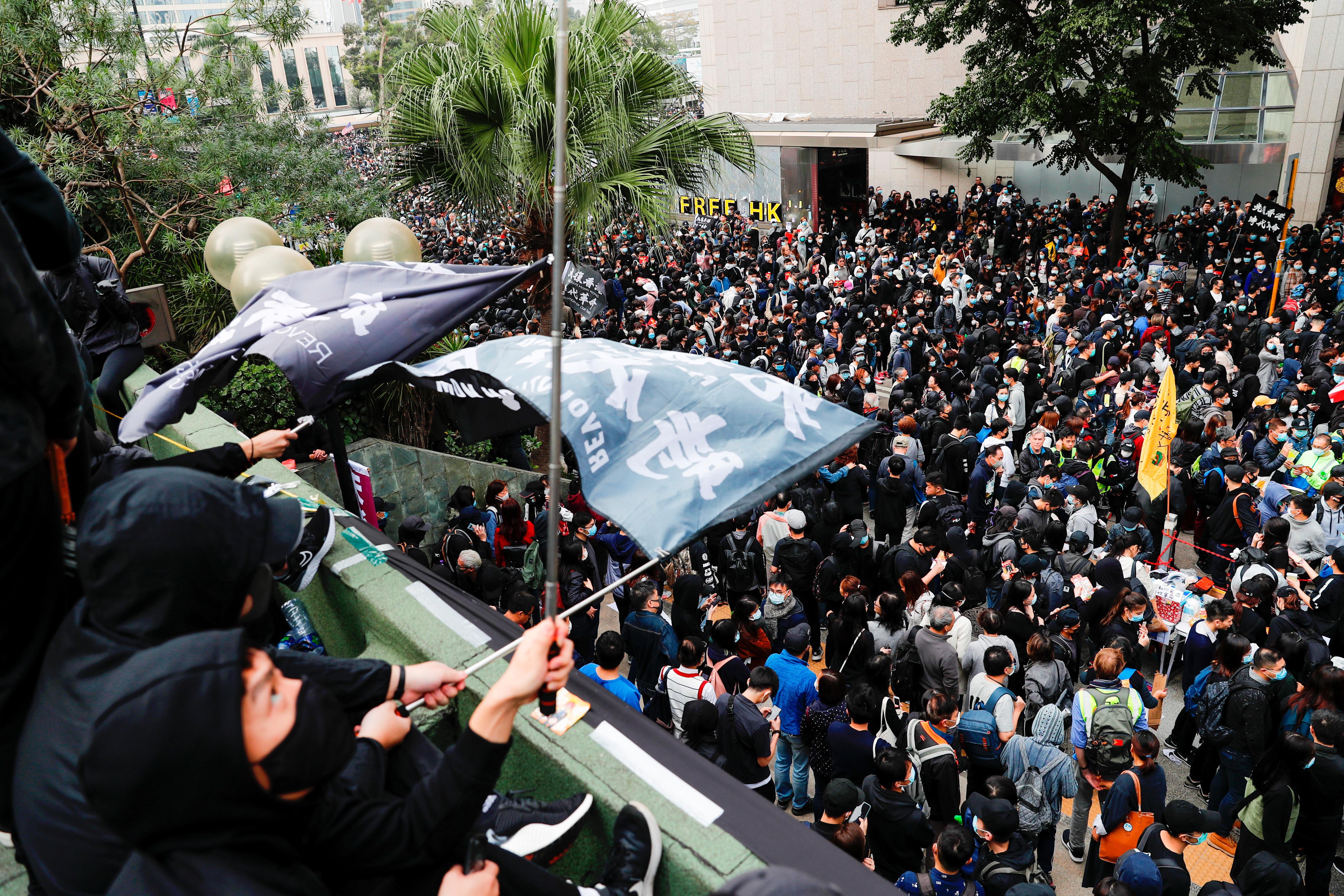 Demands for the resignation of Hong Kong’s leader, Carrie Lam, were supported by 63% of respondents in the poll, conducted by the Hong Kong Public Opinion Research Institute between March 17-20, versus 57% in a poll it conducted in December.

Supporters of the protests outnumbered opponents by a ratio of roughly two to one, with 28% against them compared with 30% in a poll in December, and 58% supporting them, versus 59% previously.

The poll showed a significant increase in the levels of support for key demands of the often-violent demonstrations which rattled the city for most of last year and into early January before the coronavirus crisis.

The survey also showed a widespread lack of confidence in the government’s coronavirus measures, with 54% expressing distrust and 33% giving the thumbs up.

The anti-government protests escalated in June 2019 over a since withdrawn bill that would have allowed extraditions of defendants to mainland China, and later morphed into a movement for greater democracy in the Chinese-ruled city.

Many protesters say Beijing has used its authority under the “one country, two systems” formula, agreed when Britain handed over the city to China in 1997, to undermine freedoms enjoyed in Hong Kong that are unavailable in the mainland.

“It is understandable that protesters resort to extreme means,” said Patrick Yeung, a 32-year-old IT worker who responded to the survey. “I hope Beijing can meddle less in Hong Kong’s affairs, which could actually stabilize Hong Kong and curb people’s anger.”

Beijing denies meddling in Hong Kong and blames the West for fomenting unrest.

For more comments from respondents see.

Lam’s office and China’s Hong Kong and Macau Affairs Office, which comes under the State Council, or cabinet, did not immediately respond to a request for comment.

Support for universal suffrage in Hong Kong, a core demand of protesters aimed at strengthening the territory’s level of autonomy, rose to 68% from 60% in December.

An independent commission of inquiry, which protesters want to look into how the police handled demonstrations, is now supported by 76% of respondents versus 74% previously.

The demands of the protesters “haven’t been diluted, or forgotten, due to the epidemic situation,” said Ma Ngok, associate professor of government and public administration at Chinese University of Hong Kong.

Opposition to the demands of the protesters has remained virtually unchanged at 15%.

“The government should investigate the culprits behind the political crisis and should not accede to other demands from the protesters,” said another respondent, Ming Hon, an unemployed 49-year-old who moved to Hong Kong from mainland China recently and had jobs in cleaning and construction.

For the poll, which had a margin of error of plus or minus 3.2 percentage points, 1,001 respondents were randomly surveyed by telephone in Cantonese, which is spoken by the vast majority of people in Hong Kong. The results were weighted according to the latest population figures.

Following a large rally on New Year’s Day in which some protesters clashed with police, crowds on the streets have dropped from many thousands to a few hundred as Hong Kongers adopted social distancing to fight the coronavirus.

Some recent protests focused on the government’s decision not to fully close the border with mainland China, where the virus is believed to have originated. The administration has since banned all tourist arrivals.

Although Hong Kong has won praise for limiting the outbreak to roughly 450 cases and four deaths, the poll showed that many citizens remain distrustful of the government.

“The results in combating the pandemic are because of the self-discipline of Hong Kong people. The government has nothing to do with it,” said Evelyn Lau, a 23-year-old tutor who participated in the poll.

Another key finding of the survey is that while calls for Hong Kong’s independence from China grew within the margin of error, opposition to the idea has dropped significantly and indifference has increased dramatically.

Support for independence rose from 17% in December to 20%, but opposition tumbled from 68% to 56%, and those not leaning either way doubled to 18%.

“People talk more about it, so it becomes more easy to accept,” said Samson Yuen, assistant professor in the political science department at Lingnan University, referring to the independence issue. “When people talk more about ‘liberating Hong Kong’, it shifts the frame.”

With Legislative Council elections due in September, the pro-democracy/pro-Beijing split remained virtually unchanged from last year’s district council vote, with 58% saying they would vote for a pro-democracy candidate and 22% for a pro-Beijing one, with the rest undecided or not planning to vote.

The degree of support for the protests varied sharply by age, education and whether respondents were born in Hong Kong. Younger and better-educated people born in the city were far more likely to lean pro-democracy or support the protests.

The poll, the second in a series commissioned by Reuters from the independent polling firm to gauge public sentiment amid the city’s worst political crisis in decades, showed respondents mainly blamed Lam’s administration for the state of affairs.

Some 43% of respondents primarily blamed the Hong Kong government, compared with 47% in the previous poll, while 14% blamed the central government in Beijing versus 12% in December. The police and protesters were blamed by about 10% each in both polls.

Many protesters say they are incensed by what they see as an abuse of power by the police in dealing with the unrest. The police say they have used reasonable and appropriate force against illegal acts including vandalism and rioting.

China has denounced acts of violence in the protests, which it sees as being aimed at undermining Chinese sovereignty.