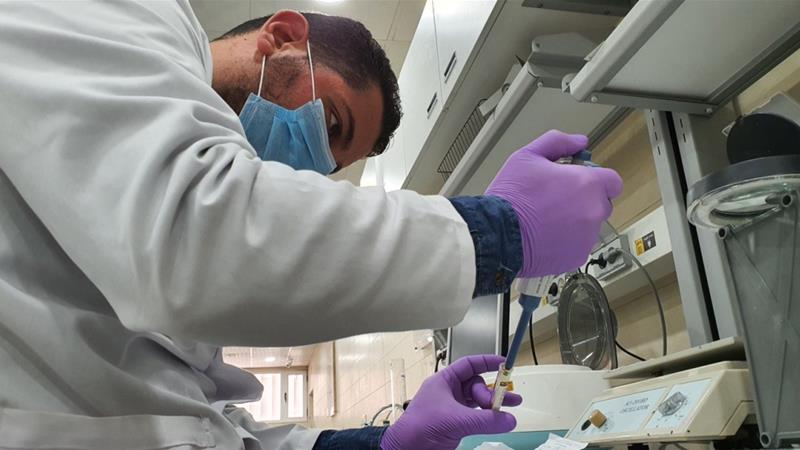 As the rush to find a treatment for the new coronavirus continues across the globe, so has the dissemination of “fake news” and misinformation, which many experts fear only compounds the dangers of the pandemic.

On Sunday, several Iraqi media outlets reported an Iraqi pharmaceutical company, Pioneer, was close to releasing a drug that could treat the deadly virus that has already claimed thousands of lives.

“We are awaiting a statement from the ministry of health so that we can celebrate this news with all the infected patients in Iraq and beyond,” it added.

The report came shortly after Pioneer published a press release on its Facebook page, citing its continuing efforts to provide drugs that had, according to global research, proven somewhat effective in treating a number of coronavirus patients.

The statement, which mentioned hydroxychloroquine sulphate, azithromycin, and zitroneer, said the company would try to make these drugs available, free of charge for Iraqis, within the next few weeks. It did not, however, confirm the drugs had, in fact, been proven to treat coronavirus.

And yet, within hours, a volley of reports flooded Iraqi news channels and other local media outlets as news of a so-called Iraqi treatment for the virus circulated.

The reports created a buzz on social media as many Iraqis congratulated one another on what they viewed as an invaluable national discovery.

“Congratulations to the Iraqi people and in fact the whole world,” said an Iraqi man, Omar al-Rawi, on his Facebook page. “An Iraqi company has found a treatment for the coronavirus, which will be made available free of charge for Iraqis.

“I cannot contain my happiness,” he added.

But by the next morning, and to the dismay of many who celebrated the news, the company issued a recorded video statement on Monday to clarify what it had meant.

Speaking to Al Jazeera, the company’s head of marketing, Ahmed Yusuf, said the company’s initial statement had been misunderstood, highlighting that Pioneer never claimed to have found a treatment for the virus, nor had it even attempted to do so.

“Our company did not discover a treatment [for the virus],” Yusuf said. “As mentioned in our press release, our efforts have focused on potentially providing anti-malarial drugs to the Iraqi market after some global research suggested that they might be effective in treating COVID-19.

“But we haven’t even attempted to find a treatment because such a mission would require a huge amount of resources which aren’t available at this time,” he added, clarifying the trial drugs had only been tested on a small number of people and could have dangerous side effects.

“Yet the media just ran with it, disseminating inaccurate reports and misinformation in attempt to be the first to ‘break’ the news,” said Yusuf.

French, American, and other health regulators have been working to expedite potential therapies aimed at treating the new coronavirus, which emerged in China in November and has now reached more than 170 countries.

Some research has shown a combination of hydroxychloroquine, which is used to treat malaria and lupus, among other diseases – and azithromycin may be effective in fighting the virus.

But so far, no approved treatment or preventive vaccine for the deadly virus has been developed, according to the World Health Organization (WHO).

“No drug has been proven effective to date. However several promising candidates are being tested in large scale clinical trials,” Margret Harris, a spokesperson for the WHO, told Al Jazeera.

Another WHO spokesperson warned such reports should be treated with care since misinformation could be far more detrimental than the virus itself.

“If not a tested, licensed product, it [the drug] can cause harm, or at minimum a false sense of security,” Christian Lindmeier told Al Jazeera.

Despite the apparently distorted news, Iraqi media reported on Tuesday that another Iraqi pharmaceutical company called Samaraa had also found a treatment for the virus.

Responding to the claims, Iraqi pharmaceutical researcher Ramy Kubaisi said misinformation could make the situation in Iraq much worse.

“It is very important that people avoid fake news and inaccurate reports,” Kubaisi told Al Jazeera. “We know that finding a treatment requires a lot of resources and time – not less than a year.

“The spread of such news can make people take precautionary measures less seriously, making the containment of the virus even harder.”

Baghdad has already taken several measures to try and contain the spread of the virus including imposing a nationwide lockdown until March 28 after it initially announced a week-long curfew in Baghdad and other cities. Schools and universities remain closed, while flights in and out of the country have been halted since March 15.

Despite these efforts, Iraqi authorities have struggled to keep people indoors with many breaking curfew across several Iraqi provinces, including many Shia pilgrims who flocked last week to the shrines of leading imams in the capital and other holy cities south of Baghdad.

So far, the virus has infected more than 300 Iraqis and claimed the lives of at least 27 others.

Sara al-Attar, who researches global health issues at Northwestern University in Chicago, agreed it was unlikely that a vaccine could be found in a year’s time.

“A vaccine or treatment cannot be administered safely and free of risk if it hasn’t been properly trialled,” said Attar. “Human trials have already begun for a vaccine, but these trials take time to carry out and follow up.

“[Meanwhile,] a hastily produced treatment or vaccine could have its own fatal consequences,” she warned.

Reports of a new treatment in Iraq are not unique, however. Other countries, including Iran – which became the epicentre of the virus after China in February – also made similar claims.

In an attempt to fight the spread of misinformation, the director general of WHO, Tedros Adhanom Ghebreyesus, called on governments, companies, and news organisations to help fight “fake news” amid the coronavirus pandemic.

“We’re not just fighting an epidemic; we’re fighting an infodemic,” he said in a speech at the Munich Security Conference last month.

“Fake news spreads faster and more easily than this virus, and is just as dangerous,” he said, adding the WHO was working with search and media companies – including Facebook, Google, Twitter, TikTok, and YouTube – to counter the spread of rumours and misinformation.

Facebook has since announced in a joint statement with Google, Twitter, LinkedIn, and others that it would be working to combat “misinformation about the virus … in coordination with government healthcare agencies around the world”.

It has also launched a series of initiatives, including a WHO’s health alert on WhatsApp to help answer common questions about COVID-19, and a partnership with International Fact-Checking Network to start a one-million-dollar grant programme to support fact-checkers on COVID-19.

Abdallah al-Salam contributed to this report from Baghdad