A flood warning for Keswick Campsite is in place, with locals advised to take ‘immediate action’ by the government’s flood information service. Meanwhile a flood warning is also in place for Churchill Barriers on Scotland’s Orkney Islands.

This is due to “a combination of high tides and strong west to south-westerly winds” causing “hazardous conditions”, Scotland’s Environmental Protection Agency said.

Sunday morning is due to see harsh gusts of wind and rain in northern Scotland.

A Met Office forecaster has warned wind gusts could even reach up to 70 mph in the Northern Isles. 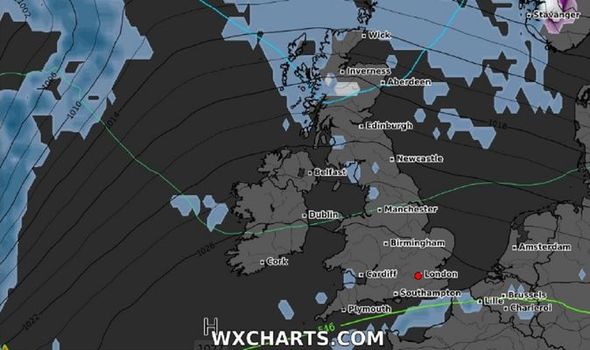 Winds will ease throughout the day, though hail and thunder could then lash Scotland as rain continues to push in from the west.

The Met Office forecaster added: “Some of those showers also pushing into Northern Ireland and northern England, but plenty of sunny spells in between.

“Across the midlands and Wales it should stay dry and bright, but across the south coast we hang on to that cloud, with some outbreaks of rain and drizzle throughout the day on Sunday.” 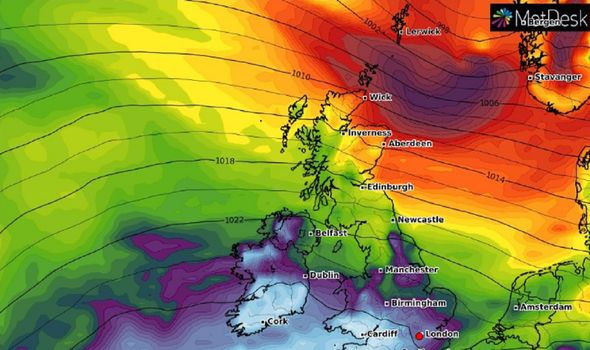 According to BBC Weather’s Darren Bett, temperatures could plummet to just above freezing in some areas of the UK on Sunday morning.

He said: “It could be down to one or two degrees across eastern Scotland, northeast England and Northern Ireland.”

Temperatures are expected to reach highs of 11 degrees Celsius in southern England though, and generally around 5 degrees for much of Scotland, BBC weather maps show. 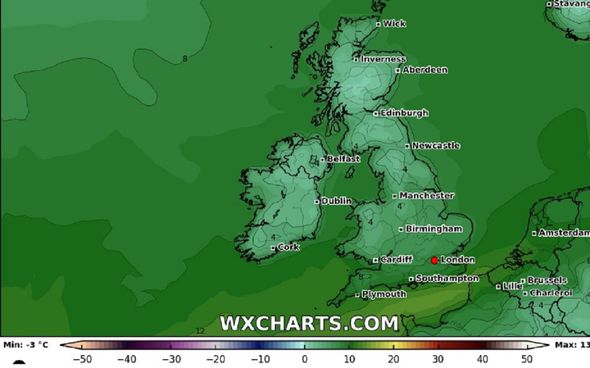 The Met Office’s general outlook for Sunday afternoon reads: “Further blustery showers in north, heaviest and most frequent across northern Scotland. Many central parts dry with some sunshine. Cloudier in the south with light rain and drizzle at times.”

For tonight, it warns of further northern showers, though elsewhere will be mainly dry with some clear areas in the east.

It added: “Cloudier in the southwest though with rain and drizzle at times. 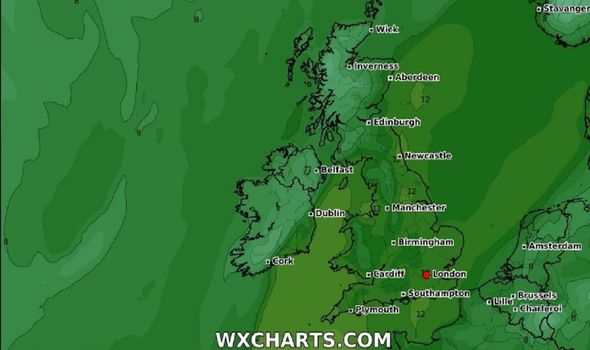 Monday will see a return of cloud, wind and rain to northwestern areas of the UK.

Elsewhere it will also be cloudy, but mostly dry, and eastern areas could even see some sunshine.

Going into Tuesday, the Met Office warns of potentially “heavy” rain at times.

However, temperatures will increase to around 13 degrees Celsius in much of England – a couple of degrees lower in Scotland but still largely double figures. 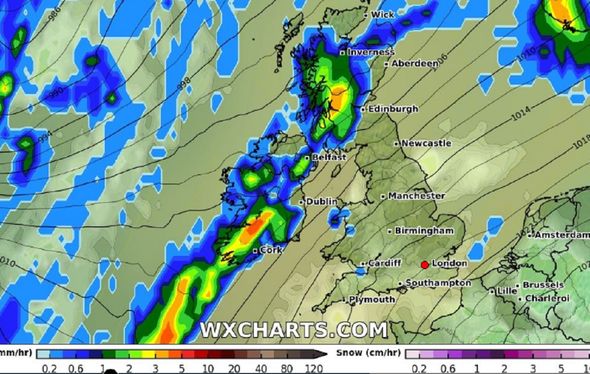 Tuesday’s rain is due to clear into Wednesday in most areas, however, before “frost and fog” settle in on Thursday.

The BBC said for Monday: “Tomorrow will be a generally milder day with a return to a south-westerly flow.

“Rain and cloud will push into the north and west, but it will remain dry elsewhere with variable cloud amounts.

“It will remain unsettled for the first half of next week. On Tuesday a band of rain will affect western and northern regions for much of the day with some patchy cloud elsewhere.”