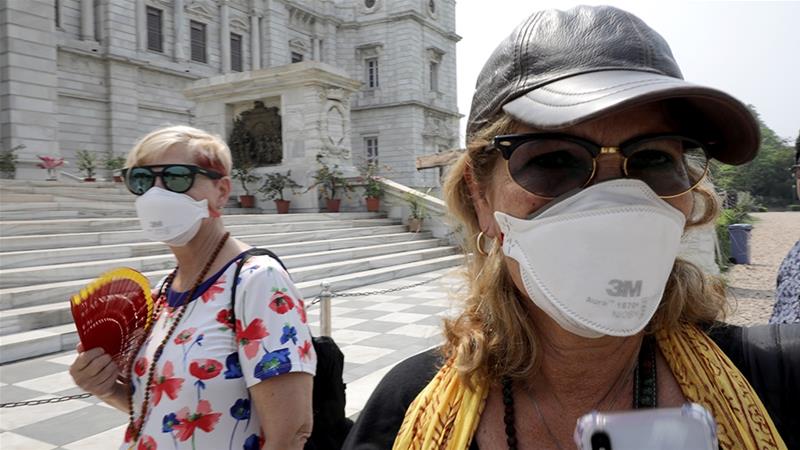 Mumbai, India – When 35-year-old Israeli traveller Sharon Shalev decided to move to the coastal Indian state of Goa in mid-February after spending a few months in the country, she did not have the coronavirus on her mind. After all, India had only seen three confirmed cases by then.

But that started changing, as more and more cases of COVID-19 started getting registered in India. Ten days ago, when the Indian government announced that it would be suspending visas for all incoming travellers, except a handful of categories, Shalev decided that staying put in Goa, known for its sandy beaches and idyllic settings, would be safer than risking her travel.

But last week, her landlady, an elderly Goan lady, asked Shalev to evacuate the apartment and locked it, fearing that the Israeli national might be carrying the virus that has killed more than 16,000 globally.

Shalev tried to find other accommodation in the same area, but she failed. “Her neighbour, another old woman, told me that she had rooms to rent too, but she’d rather it remained empty than give it out to a foreigner.”

And Shalev is not the only one left in the lurch.

As India’s COVID-19 cases rise swiftly, so is panic and fear among locals.

In some of the country’s most popular tourist hotspots, foreign tourists are finding it tough to gain shelter, with panicky guest houses and hotels turning them away or worse, as Shalev discovered, evicting them.

For many others, their interactions with locals are marked by suspicion and rudeness, from being asked to leave restaurants to being refused cab rides.

Many believe that behind this panic among locals around the spread of the virus through foreign tourists lies a mix of context and panic, driven by disinformation. Much of it is driven through India’s vast usage of social media networks, especially WhatsApp with more than 200 million users.

According to data made public by the Indian government, India saw 10.89 million foreign tourists in 2019, bringing in $30bn in foreign exchange earnings for the South Asian nation.

However, among the first cases of COVID-19 that India reported were a group of 15 Italian tourists who tested positive#. That, and the fact that a majority of India’s COVID-19 cases continue to be those with recent travel history, have added to people’s suspicions in places frequented by tourists, say locals.

“There is a genuine sense of fear among people here that foreign tourists might be carriers, because the virus has come to India from abroad,” said Durgadas Kamat, the national spokesperson of Goa Forward Party, a regional political party based out of Goa, which sees close to one million foreign tourists annually.

“So, it is just natural. People just don’t want to take risks anymore, especially after what is happening across different countries.”

Michael Jules found himself fighting similar battles. Jules, 33, an American national, and his Indian partner, Ankita (both names changed to protect their identities), decided that there could be nowhere safer to be than the latter’s parental home in the northern city of Lucknow, which is where they headed in mid-February.

Lucknow is the capital of India’s most populous state of Uttar Pradesh, a state that reported its first case only on March 12.

“I hadn’t seen another foreigner and I was worried about how people would react to my presence in this gated community. My intuition proved correct…I was told to lay low and stay unseen [by my hosts],” said Jules.

That helped, only to a limited extent. As cases began to emerge, the domestic help refused to come to Ankita’s home citing Jules’s presence.

The managers of the building where the house was, also stepped in, pressuring her parents to evict him. Jules had no option but to leave; the couple drove for over seven hours, across more than 530km (329 miles) to reach New Delhi on Sunday, when the Indian authorities had ordered a nationwide lockdown.

“Not only am I now forced to endanger my health by travelling during an epidemic, when food, accommodation and transportation is problematic, but also, this has taken a toll on our relationship with Ankita’s parents,” said Jules.

At the beginning of March, India had recorded only three cases of COVID-19. In three weeks, that number has seen a 100-fold increase, with there now being more than 500 cases by Tuesday morning.

The rapid rise in India’s COVID-19 cases has led to many reacting with fear, panic and even, racism. Across the country, there are reports of racist attacks on people from India’s northeastern region that borders China, suspecting them of being carriers of the virus.

Much of it has also seeped through various travel forums on social media, especially on Facebook. Fervent appeals for help and relief by tourists stranded in different parts of India are often met with derision by locals, some of them even asking these tourists to “go back to your countries”.

Many other travellers are bracing themselves for a turbulent time.

For 35-year-old Dannie Sowden, a United Kingdom national who runs a therapy business in Jaipur, this has been a turbulent time. Sowden has been made to feel unwelcome in taxis, asked to leave restaurants and says she has been subject to hostile looks in public spaces.

“I think people get fixated on the fact that the virus was brought in from someone outside and they are so worried that they let that fear take over and things escalate. After all, it is far easier to blame someone else and pin your fears on to external factors. Though, scared or not, I don’t think there is justification for this kind of behaviour,” she said.

Fearing for her personal safety, a few days ago, she decided that she would not leave home, even before the government could impose travel restrictions.

Natalia Lagodzka, a Polish national, currently in the northern city of Jaisalmer, was traumatised and scared after the hotel she was staying in asked her to leave over the weekend, because they wanted to shut down the night before the nationwide lockdown.

Initially, other hotels refused to allow her in, asking for a medical certificate vouching that she was healthy. Lagodzka says she would have been without a roof, if not for the intervention of local police who helped her obtain the certificate.

So far, Indian authorities have not addressed this. Instead, one of the responses by local Indian authorities has been to ban tourists. Some of the states that banned tourists include popular tourist destinations of Himachal Pradesh, Uttaranchal, Indian-administered Kashmir and Nagaland.

But Goa’s tourism minister said the state government had imposed restrictions on tourists. “We have decided not to allow any fresh foreign tourists inside Goa. In fact, we even turned back two cruise ships from Dubai that wanted to dock in Goa last week,” Manohar Ajgaonkar told Al Jazeera.

However, Ajgaonkar said the government had not instructed the eviction of any tourists already staying in Goa.

Locals say that this ambivalence has led to many guest houses taking matters into their own hands.