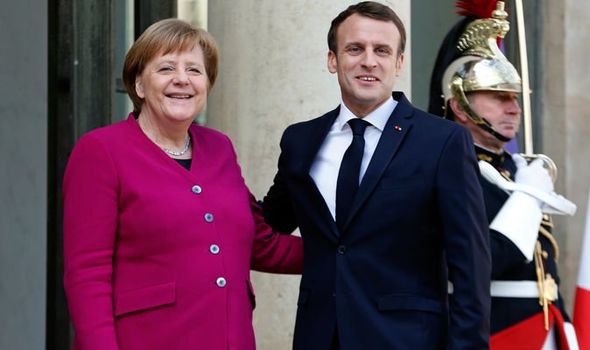 German Defence Minister Annegret Kramp-Karrenbauer visited Paris to try and seal the deal on Tuesday but the meeting failed to break the deadlock. Tensions between the two EU leaders erupted after Frau Merkel demanded access to Dassault’s industrial secrets.

The demand sparked the fury of Les Patriotes leader Florian Philippot, who called on President Macron to scrap the plans and sign a new French-only project.

“They demand because they know that France is weak, dominated by Europeanist ideologies more than by a sense of national interest!

The French Aviation firm would also have to give up some technologies it has developed for French-led defence systems, something it is unwilling to compromise on.

Airbus, its German counterpart, is also refusing to deal with technological “black boxes” over which it could not have control due to lack of intellectual property.

The two countries, together with Spain, hope to validate the contracts before the German elections in September and the presidential election in France in spring 2022 – with the industrial study contracts (phase 1B) to carry out a flight demonstrator of the combat jet.

However, this relies on an agreement between executives, the vote of the budget in the Bundestag and the signing of contracts with manufacturers.

French Minister Florence Parly said the deal must be sealed within 10 days.

The validation of the agreement would greatly complicate any possible future inclination to abandon the project, because of the amount then invested: one billion euros for phase 1B out of a total of six billion to lead to the demonstration.

At this stage, the two countries have equally committed 150 million euros in February 2020 for the first demonstrator studies (phase 1A) scheduled over 18 months.

The new combat jet should replace the French Rafale and German and Spanish Eurofighters by 2040.

The FCAS programme, announced by the governments of France and Germany in 2017, will provide the next level of airpower by creating a system of manned and unmanned platforms with full operational capability expected by 2040.

FCAS is a key part of Macron’s push for military sovereignty on the Continent and his aim to lessen its reliance on the Nato alliance.

So far governments have only approved funding for prototype and design contracts, a small fraction of the multi-billion-euro budget for the 20-year project.

In February, President Macron said: “FCAS will not be completed in the next few weeks. It’s a complex issue.”

He added: “In the next few weeks, we will have raised the last remaining points and I am then hopeful that, by the spring, we can arrive at the administrative and political validations which are expected to keep the calendar and our ambitions.”

Frau Merkel said that while the project is under French leadership, it must be a project that shows both countries “on an equal footing”.

She added: “There are still many questions to be clarified”.

In 2018, the UK launched Tempest, in response to the Franco-German programme for the development of sixth-generation stealth fighters.

The UK has already committed £2billion to the programme which aims to start production by 2025, with delivery of the fighter aircraft system by 2035.
Source: Read Full Article