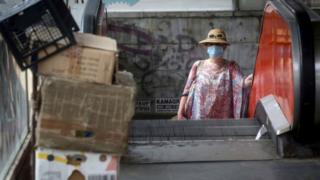 Greece has banned all but essential travel from Serbia as infection numbers steadily rise in the Balkan country.

For a week from Monday morning, all entry points are closed to Serbian travellers, Greek officials said.

It comes days after Serbian authorities re-imposed lockdown restrictions in the capital Belgrade.

In the last 24 hours there have been another 302 infections reported in Serbia, with more than 16,000 total cases and a death toll of 311.

In May, there were about 50 new cases reported daily.

Currently, Serbia is on a list of 15 countries whose citizens are allowed to enter the EU, after the bloc partially reopened its external borders on 1 July. Individual member states are not, however, bound by the list and make their own decisions on border controls.

Serbia is also on a list of countries whose citizens do not need to quarantine on arriving in England.

But there has been a significant rise in cases throughout the Balkans recently.

Montenegro recorded a record daily rise in infections on Sunday, while Kosovo has brought back a nightly curfew in the capital Pristina as cases rise.

Austria issued a travel warning for six Balkan nations on Tuesday, including Serbia and Montenegro. And Croatia has reinstated 14-day quarantines for travellers from Bosnia, Kosovo, North Macedonia and Serbia after it saw a spike in infections late in June.

Authorities have declared a state of emergency in several major cities and towns in Serbia, including Belgrade, Kragujevac and Novi Pazar.

Gatherings are restricted, opening hours for cafes and restaurants have been shortened, sporting events are banned and masks are compulsory on public transport and in indoor public spaces.

Novi Pazar is particularly badly affected, with local media reporting a lack of medical equipment there – allegations which the authorities have denied. Prime Minister Ana Brnabic was booed on a visit to the city last week.

After imposing one of Europe’s strictest lockdowns in March, Serbia lifted its nationwide restrictions in May. Since then the country has held football matches with spectators, religious festivals and even parliamentary elections in June.

But cases have risen substantially since then. Last week a number of high-ranking officials in the ruling coalition tested positive for Covid-19 after attending an election victory party.

In June, the Balkans Investigative Reporting Network (BIRN) issued a report alleging that Serbia had underreported cases and deaths during the outbreak.

President Aleksandar Vucic criticised that article on Thursday, alleging their data was “not authentic”.