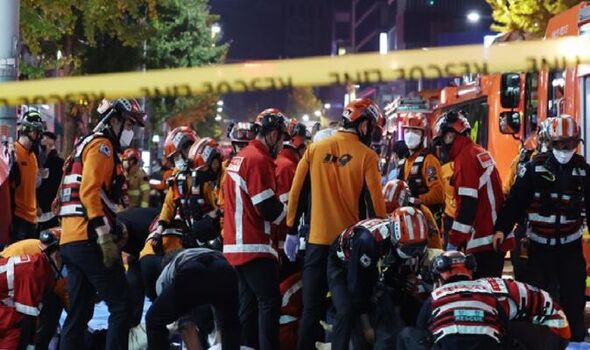 Dozens of people have been badly injured and are receiving CPR after being crushed in a stampede at a Halloween party in Seoul, South Korea. The injured people were hurt by a large crowd pushing forward on a narrow street during the festivities in the Itaewon area of the country’s capital, according to the country’s Yonhap news agency. Emergency services received at least 81 calls from people who said they were suffering with breathing difficulties. The Yonhap news agency has reported that around 50 people have been injured.

Choi Cheon-sik, an official from the National Fire Agency, said around 100 people were reported as injured. Dozens are experiencing cardiac arrest.

The emergency services official said the crowd had been near Hamilton Hotel, a popular party spot in the city.

The National Fire Agency official added more than 400 emergency workers from around the country have been deployed, including almost all those available in Seoul.

In a statement, South Korean President Yoon Suk Yeol said officials should ensure swift treatment for those injured and review the safety of the festivity sites.

He has also asked the Health Ministry to deploy disaster medical assistance teams and secure beds in nearby hospitals.

Seoul’s mayor Oh Se-hoon is visiting Europe but has decided to return to his home country following the emergency incident in the capital.

There were reportedly 100,000 people in the area celebrating the first outdoor no-mask Halloween event since the Covid pandemic.