Hawaii volcano Kilauea has created nearly 20 cracks in the earth’s surface as lava continues to sputter out from the erupting peak.

Terrifying footage from Kilauea captured the moment a GoPro camera used to record the lava flow was entirely engulfed by the magmatic river.

The video, shared on Twitter by NASA engineer Jenna-Halley Brooks, shows ripples of molten hot lava making its way toward the camera before covering it entirely.

The camera can be seen spewing dark clouds of smoke as the lava burns through the structure of the GoPro. 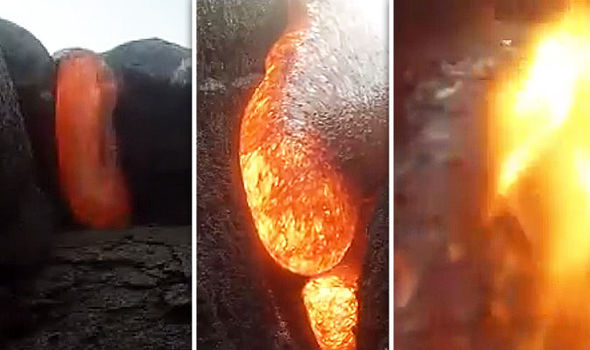 Kilauea began erupting on May 3 and has since spewed more than 26 gallons of lava, destroying more than 500 buildings and forcing thousands to flee their home.

Scientists fear the lava released by Kilauea so far has not even scratched the surface of its hidden magma reserves.

The US Geological Survey (USGS) said: “We’re not exactly sure how much magma is stored beneath the summit.

“We have only estimates, but we are confident it is at least in excess of 100 times what has been erupted so far from Fissure Eight.

“So we would need years of the current eruption rate to empty the summit.”

Fissure 8, one of the mains cracks in the earth’s surface Kilauea created, has been oozing lava into a huge lava torrent gushing into the Pacific Ocean.

We’re not exactly sure how much magma is stored beneath the summit.

The USGS’ latest status update at 03:23 am said: “The size and shape of the flow field is virtually unchanged since the morning of Monday June 18, with the exception of an additional 28 acres, mostly at the southwest margin of the flow in the coastal area.

“Magma continues to be supplied to the Lower East Rift Zone. Seismicity remains relatively low in the area with numerous small magnitude earthquakes and low amplitude background tremor. Higher amplitude tremor is occasionally being recorded on seismic stations close to the ocean entry.”

Despite the high rate of lava still spewing out of the volcano, local authorities announced they would begin to scale back operations as the magma flowing over Hawaii’s Big Island is now covering areas that have already been destroyed.

Civil Defense Administrator Talmadge Magno told Hawaii News Now: “We’ve pretty much thrown everything at this event for the past month and a half now.

“Some aspects of it can kind of start to scale down as the volcano somewhere runs into a stable situation.”