Home » World News » HEATWAVE warning: Temperatures of up to 37C to SCORCH Britain

The Met Office has forecasted a weekend of “exceptional” temperatures that will extend, at least, into the start of next week. However, some areas of the north of Britain will see average temperatures in contrast to the heatwave and hot air that the south will experience.

Met Office meteorologist, Aidan McGivern, said: “Not everywhere, however, it will be significantly cooler across northern parts of the country.

“Certainly overnight, having seen a few showers clear through, by the early hours of Saturday, Scotland, Northern Ireland, as well as Northern England will see largely clear skies, but temperatures will fall away into the single figures in sheltered spots – as low as five degrees across parts of Scotland.

“A significant contrast for the south, where the very warm air holds on.

“And, in some parts, temperatures will be not much lower than 22C. An uncomfortable night for sleeping. 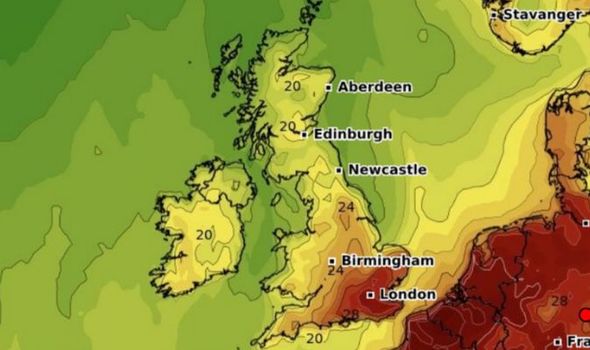 “Having started that warm in the south-east, temperatures rise very quickly during Saturday morning.”

He added: “By and large, across much of the UK Saturday is a sunny day.

“There will be a brisk breeze along the North Sea coast, making it feel cooler compared to Friday.

“But otherwise, across much of Wales, central and southern England it’s another very hot day. 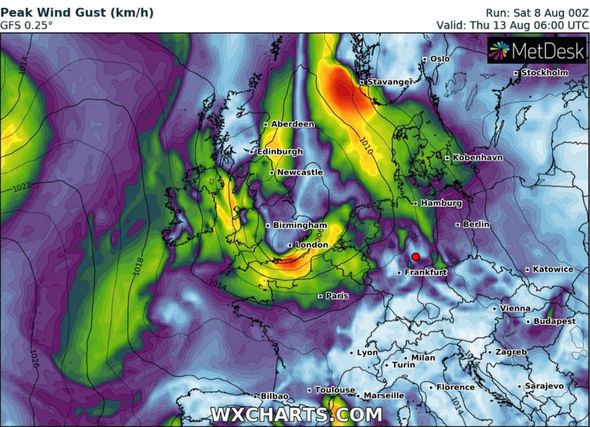 “Temperatures across East Anglia, the south-east, into parts of the Midlands, along the south coast are 32C to 34C – and as high as 37C in London.

“These are exceptional temperatures by any measurements.

“And, further north, where the heat extends into parts of northern England, but it’s more like average temperatures for Scotland, Northern Ireland and northern England.”

But, in the northern half of the country, temperatures will not rise as much, which will be a relief, especially when trying to sleep at night. 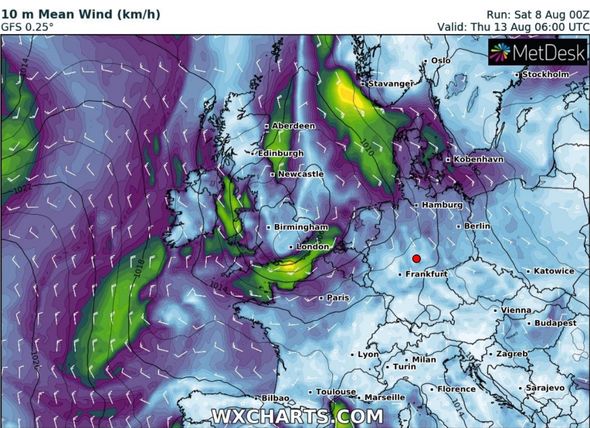 Mr McGivern said: “A fine summer’s day in the north, a relief, I suspect, for many, to be away from the exceptional heat further south.

“Now, overnight, there will be some showers, I suspect, by the start of Sunday.

“The showers could develop just about anywhere, particularly across the southeastern parts of the country.”

The presenter warned it will be an uncomfortable night for sleeping in these areas of the country.

He added: “And then, Sunday, obviously is another very hot day across southeastern parts of the UK. 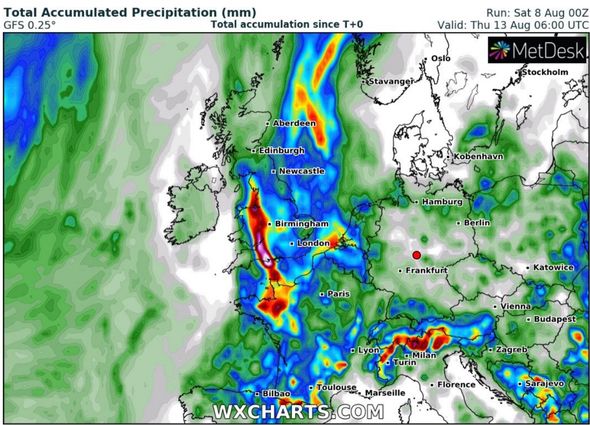 “No showers will follow further north, and actually, there will be more cloud cover, I think, for parts of northern England by the afternoon.

“Nevertheless, for most, it’s another sunny Sunday with, again, temperatures close enough to average across the northern half of the country.

“But, again, temperatures in the low to mid-thirties across southeastern parts of the UK.”

He added: “And that heat that’s coming up from the near-continent will extend further north, once again, on Monday – another hot day across some parts of the UK.”