WASHINGTON — President Biden has a two-step strategy to cut tailpipe emissions, the nation’s largest source of greenhouse gases: First, restore the standards to roughly the level set by President Barack Obama. Then, tighten them even further, with an aim of making the electric car the dominant vehicle sold in the United States.

The Biden administration plans this month to propose a tailpipe emissions rule that would largely mimic the Obama standards, which were jettisoned in 2019 by President Donald J. Trump.

At the same time, according to four people familiar with the plan, the administration is starting to write more stringent auto pollution rules that could cut emissions more deeply and force carmakers to increase sales of electric vehicles but could also face political pushback and disrupt the auto industry.

Mr. Biden has set the most ambitious climate agenda of any American president, pledging to cut the pollution that is driving global warming by 50 percent from 2005 levels by 2030. That goal would require a radical transformation of the nation’s economy away from fossil fuels, including a rapid shift by American drivers from internal combustion engines of the last century to zero-emissions electric vehicles.

“Look, the future of the auto industry is electric. There’s no turning back,” Mr. Biden said at a Ford plant in Michigan in May, at the unveiling of the company’s new all-electric pickup truck. “We’re going to set a new pace for electric vehicles. That means reversing the previous administration’s shortsighted rollback of vehicle emissions and efficiency standards. Setting strong, clear targets where we need to go.”

The Environmental Protection Agency and the Transportation Department are expected within weeks to propose a rule that would require passenger vehicles sold by automakers to average about 51 miles per gallon of gasoline by 2026. That would be more stringent than the current standards, set by Mr. Trump, of about 44 miles per gallon by the same year, and slightly less ambitious than the rules enacted by President Barack Obama in 2012, which required roughly 51 miles per gallon by 2025.

A spokesman for the E.P.A., Nick Conger, confirmed that the White House was reviewing the draft rules to be proposed in July but declined to discuss details. 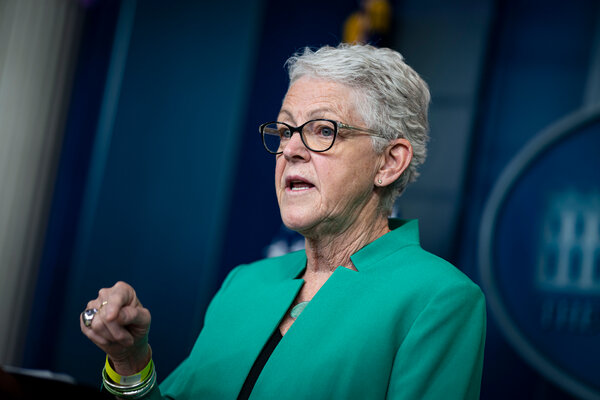 At the same time, the administration is expected to get to work on a more ambitious auto pollution rule that would run until at least 2030, and possibly through 2032. Gina McCarthy, Mr. Biden’s top climate adviser, is weighing how to write it in a way that would win the support of both auto companies and union workers, according to people familiar with the matter.

As other sources of greenhouse gas gases have decreased, transportation has become the largest single source of climate-warming pollution in the United States, accounting for 28 percent of carbon emissions.

Because tailpipe emissions rules pertain to the average mileage per gallon of all vehicles sold by a carmaker, more stringent standards are designed to force auto companies to sell more electric cars to offset the sales of conventional pickup trucks, sports utility vehicles and other models that get low mileage. The Ford F-150, for example, is the nation’s most popular vehicle and gets just 25 miles per gallon.

The risk for automakers is whether consumers will purchase electric vehicles that are generally more expensive and logistically challenging, since the nation lacks a network of electric-vehicle charging stations.

The design of any tougher future rules would quite likely depend on an infrastructure bill, according to analysts and people familiar with the administration’s plans.

If Congress approves hundreds of billions of dollars for construction of charging stations as well as tax incentives for both buyers and makers of electric cars and trucks, Mr. Biden would most likely be able to secure industry support for more stringent rules that would result in more electric vehicles on the road. Currently, only about 2 percent of vehicles sold in the United States are electric.

But if a final infrastructure package includes little or no spending on electric vehicles, a tougher tailpipe rule would likely face opposition from automakers, who would be forced to build and try to sell costly electric cars. And autoworker unions are also likely to fight a rapid federal push toward electric vehicles absent any help from the government. That’s because many economists estimate that manufacturing electric vehicles requires a third fewer workers than building conventional vehicles.

“My concerns are, and she understands, that whenever we have technology shifts in the industry, it takes a lot of investment, and it doesn’t always work and take hold,” said Rory Gamble, president of the United Auto Workers, in an interview in March, speaking of his conversations with Ms. McCarthy, who has given the union leader her personal cellphone number. “We are stressing and making everybody aware of that in the shift to E.V.s.”

Pushback from oil and gas refiners, automakers and unions could create a political liability for a president who has proudly styled himself a “car guy” and a “union guy,” labels with great appeal to voters in the industrial areas of the Midwest and Northeast, including swing states like Michigan and Ohio.

Environmentalists and progressives, on the other hand, want sharp cuts in pollution, now.

A recent report by the International Energy Agency found that, in order to keep average global temperatures from increasing 1.5 Celsius above preindustrial levels, the threshold beyond which scientists say the Earth faces irreversible damage, all nations would have to end the sale of new gasoline-powered cars by 2035. The Earth has already warmed an average of 1 degree Celsius since the late 1800s.

Ms. Oge, the tailpipe emissions expert, said the Biden administration should write a strict rule that would require electric vehicles to account for 60 percent of automakers’ sales by 2030.

“They need to give some sort of marching order to the federal agencies and the car companies,” Ms. Oge said. “This is a moment where every year counts. This is the moment to give the industry the message for where to invest through 2030.”

Governors from a dozen states have urged the president to set standards that ensure that all new passenger cars and light-duty trucks sold by 2035 are electric. One of those states, California, has already pledged to end the sale of traditional gasoline-powered cars by that year.

But that is barely a fraction of the $174 billion that Mr. Biden wants to spend on vehicle electrification in a second infrastructure bill this fall, which Democrats hope will include robust provisions to fund 500,000 electric vehicle charging stations and generous tax rebates for purchasers of electric vehicles. Neither bill is guaranteed to pass in the closely divided Congress.

“If they get a big infrastructure package that includes a lot of electrification investments, then they have the anchor of a program that pulls a lot of E.V.s into the U.S. market,” said David G. Victor, the director of Laboratory on International Law and Regulation at the University of California, San Diego. “If they don’t have that, then I think it’s much harder to see, with regulation alone, how they can do a big electrification push.”

President Barack Obama’s 2012 tailpipe emissions rule stood as his single largest domestic climate policy achievement. It was modeled after a stringent regulation adopted by the state of California. The E.P.A. estimated at the time that federal compliance with the rule would reduce Americans’ oil consumption by 12 billion barrels and cut 6 billion tons of greenhouse gas pollution over the course of the program — the equivalent of roughly a year’s worth of greenhouse pollution for the entire country.

When Mr. Trump rolled back the rule in 2020, the move was widely seen as the crowning achievement in his quest to dismantle his predecessor’s environmental legacy.

California fought back, though. During the Trump administration, California struck a deal with five major automakers under which they agreed to comply with the tough California standards rather than the weakened Trump standards.

Whether the Congress invests heavily in electric vehicles affects not only Mr. Biden’s ability to implement ambitious new tailpipe rules but his capacity to persuade other countries to follow suit when he attends a United Nations climate conference in November. Should the infrastructure bill fall apart, or fail to include robust measures to boost electric vehicles, that task will be much harder.

“If the large scale investment that is needed in infrastructure to pull this off goes down the drain, it will throw a very big gallon of cold water on the deal,” said Michael Oppenheimer, a professor of geosciences and international affairs at Princeton University, who has helped to write United Nations climate science reports. “All of this has to rely on a delicate political balance in a system that’s very rickety right now.”