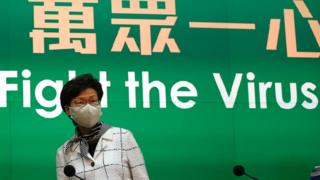 Hong Kong has recorded its highest one-day increase in cases since the pandemic began, the territory’s Chief Executive Carrie Lam has said.

At a Sunday press conference, Ms Lam said there had been more than 100 new infections, and announced new restrictions to contain the spread.

Ms Lam described the situation as “really critical” and said there was “no sign” it was coming under control.

Non-essential civil servants must work from home and testing will increase.

The chief executive promised that authorities would carry out 10,000 tests a day, and also made wearing face masks compulsory in indoor public spaces. Face coverings were already mandatory on public transport.

The announcement comes days after Hong Kong Disneyland shut less than a month after reopening as the government brought back social distancing measures.

Authorities closed bars, gyms and clubs last week amid the fresh outbreak and barred restaurants from allowing diners to eat in past 6pm. These restrictions will be extended.

Hong Kong has seen relatively few cases of coronavirus after imposing rapid and strict measures at the start of the year to prevent its spread. But there has been a surge in cases recently, with more than 500 new infections reported in the last two weeks.