Last week Europe found itself in the midst of a major heatwave, with Moscow in Russia reporting its highest June temperature on record. In addition to the heat, Europe has faced a barrage of extreme weather, with thunderstorms and flash flooding striking in recent days. Parts of the US and Canada have also been subjected to a “heat dome”, an area of high pressure which essentially traps heat over a certain region, resulting in a heatwave well above normal temperatures.

Canada reported its highest ever temperature on Sunday, with Lytton in British Columbia soaring to 46.6C.

The US states of Washington and Oregon in the Pacific north-west have also experienced sweltering conditions, with the US National Weather Service labelling the conditions “historic”, adding that “numerous daily, monthly and even all-time records” are likely to be set.

According to WXCHARTS weather maps, which use data from MetDesk, the hot weather across Europe and North America looks likely to continue over the next few days. 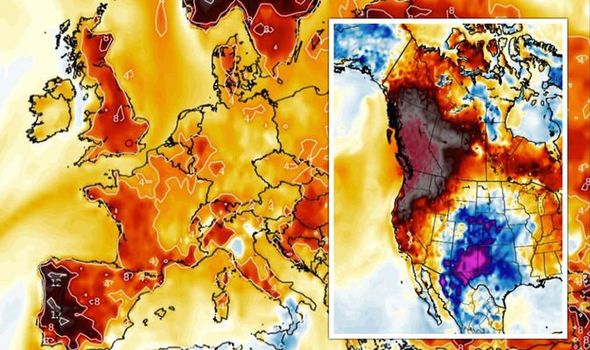 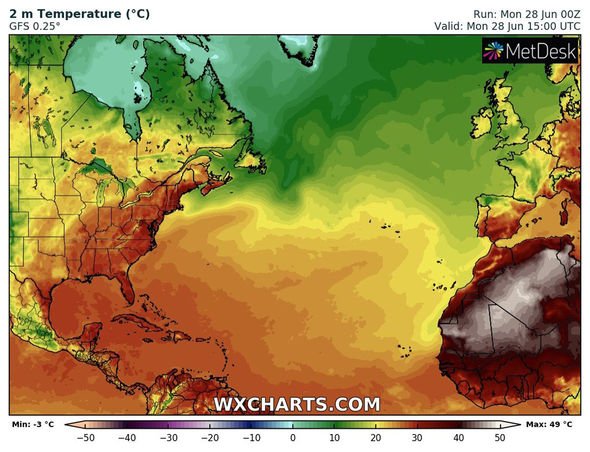 High heat will also continue in the north-west USA, which could see temperatures as high as 112F (some 44C) on Monday in places like Portland and near Seattle.

Parts of the north-east USA could also hit the high-20 Celcius mark, according to the forecast.

While the hot weather continues in North America this week, many parts of Europe are also predicted to see further hot spells.

On Tuesday, WXCHARTS maps show much of Europe blanketed in red, suggesting temperatures could exceed 30C in several areas. 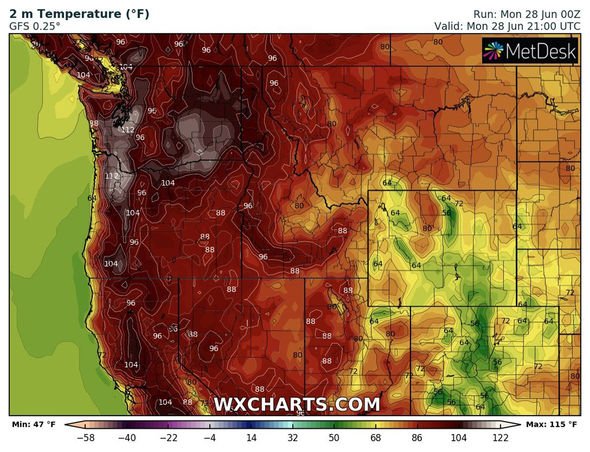 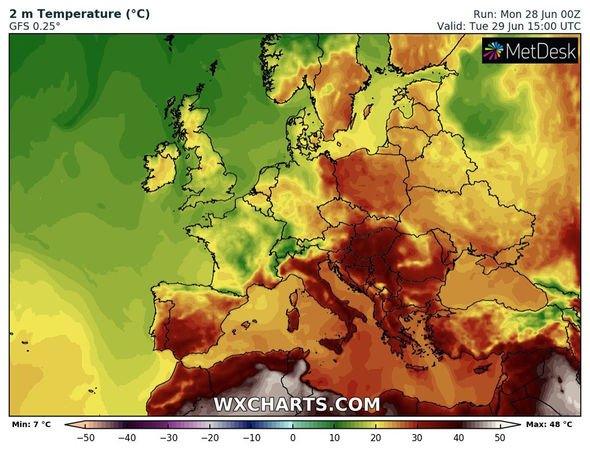 Later this week, based on 2m temperature forecast maps, the temperature may rise as high as 40C in some European countries.

On Saturday and Sunday, the temperature is forecast to hit 40C in parts of Spain.

On Saturday, the heatwave is also expected to hit the south of France, with 30.4C forecast.

Thunderstorms were reported across parts of western and central Europe, while hail, winds, and flash floods have also taken place in some areas over the last few days. 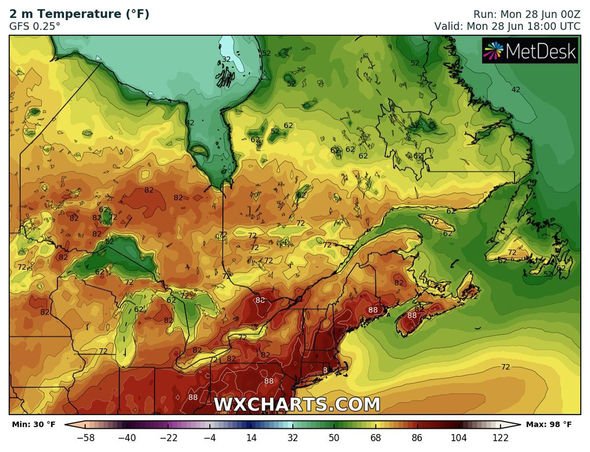 But the period of intense weather appears unlikely to finish any time soon, with warnings issued for further storms on Monday.

Severe Weather Europe has issued a moderate risk (MDT) warning for some parts of Europe on Monday, with other areas under an enhanced risk (ENH) warning too.

The warnings have been issued for France and Germany, where “severe thunderstorm activity” is predicted to “significantly increase in the afternoon and evening hours”.

Severe Weather Europe’s forecast reads: “An outbreak of severe thunderstorms is again forecast to develop across eastern France, northern Switzerland into Germany ahead of an approaching deep upper low centered over the Bay of Biscay and western France on Monday. 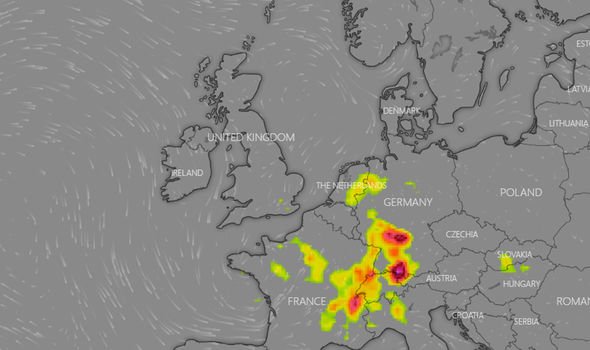 “A great overlap of moderate shear and high instability should support large to very large hail and severe damaging winds, as well as local flash floods.

“Scattered storms will merge towards the evening hours while gradually spreading into Germany.”

The hot weather currently sweeping Europe has not hit the UK quite so significantly, but the Met Office has forecast warmer weather for parts of the northern UK for the first part of this week.

Some thunderstorms are also forecast to make an appearance this week, with a yellow thunderstorm warning issued for parts of southern England until 10pm on Monday.

“Brighter and warmer in the south with heavy showers and thunderstorms developing.

“Tonight, showers mostly dying out, some persisting across southern England. Cloudy for many, but clear spells across Scotland, Northern Ireland, and northern England.

“Tomorrow, warm sunshine again in the north. Cloudier across central and southern areas with some patchy rain or showers, perhaps heavy in the far south.”