On Tuesday, The Times’s critic called it “the restaurant of the summer.” On Wednesday morning, the chefs called it off. 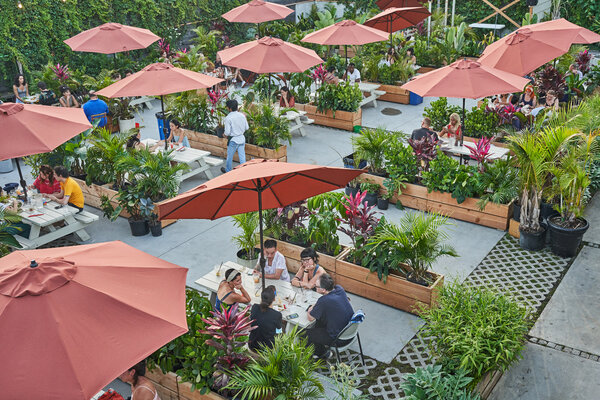 On the day after a review in The New York Times declared Outerspace, in Brooklyn, “the restaurant of the summer,” the three chefs who collaborated on its union of Vietnamese and Cambodian cooking pulled out.

Anthony Ha, Sadie Mae Burns and Chinchakriya Un informed the owners of Outerspace, an outdoor venue in East Williamsburg, Wednesday morning that they were immediately terminating the residency they had begun on Memorial Day weekend. Their joint effort had been scheduled to continue through Labor Day.

“We were shocked,” said Wells Stellberger, who owns Outerspace with Molly McIver. “They’re extraordinary, talented people. There were things we just weren’t able to see eye to eye on, and to us, we figured we could solve anything. Nothing was insurmountable.”

Outerspace is an unorthodox restaurant for New York City. Situated in an outdoor pavilion thick with palm fronds and banana leaves placed between picnic tables and patio umbrellas, it may cancel dinner in the event of rain and closes entirely when cold weather sets in. In its first season, last year, it had a different team of chefs cooking food that was familiar and easy to imagine eating on picnic tables — pizza topped with farmer’s market produce, for instance.

This season, Outerspace took a risk by asking two pop-ups whose chefs had never cooked together — the floating Vietnamese kitchen Ha’s Dac Biet and the sporadic Cambodian exploration known as Kreung — to merge cuisines on a single menu they would cook together in a ramshackle outdoor kitchen covered with a corrugated sheet-metal roof.

Mr. Ha and Ms. Burns of Ha’s seemed to hit it off right away with Ms. Un of Kreung. Their dishes at Outerspace, they said, did not come from one pop-up or even one country, but from a shared vision of Southeast Asia as a region.

They were regularly serving 200 to 300 people a night, Mr. Stellberger said. It was a far cry from the small, controlled pop-ups the chefs had run in the past.

In a brief phone interview, the chefs said they had known for some time that their residency at Outerspace was not “sustainable” before telling Mr. Stellberger and Ms. McIver on Wednesday. Mr. Stellberger said he agreed with their assessment. “The volume, the type of food they were doing — it was just very intense,” he said. “It was a huge project.”

The three chefs plan to continue their collaboration this summer. They said they hoped to announce a new location and time within the next few days.