The relationship between the island’s cooking and the food in mainland China is complex.

At Good to Eat Dumplings in Emeryville, Calif., the chef Tony Tung stretches a raw dumpling into shape.Credit…Mark Davis for The New York Times

EMERYVILLE, Calif. — In the bustling open kitchen of Good to Eat Dumplings, the chef Tony Tung makes long, evenly stretched, generously filled Taiwanese dumplings. The bottoms are crunchy and golden, and the filling is unembellished but irresistible — a juicy mix of pork, shrimp and shredded cabbage, lightly perfumed with scallions and sesame oil.

Ms. Tung was born and raised in Taichung City, Taiwan, and when she started cooking at pop-ups here five years ago, she was surprised to find that so many diners outside of the Taiwanese American community were unaware of Taiwanese food. Oh, you mean Thai food!

Sir, no. It sounds discouraging, but Ms. Tung and her wife and business partner, Angie Lin, decided to treat every question, no matter how obtuse, as an opening. Maybe explaining their ingredients, techniques and flavors could deepen customers’ context and appreciation for Taiwan. Maybe the deliciousness of the food could leverage someone’s curiosity. 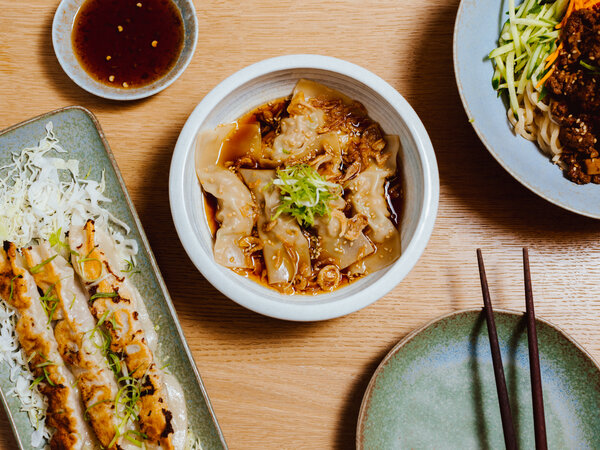 At their new restaurant, which opened in May, Ms. Tung cooks as Ms. Lin hops from table to table, chatting with diners. You might hear her explain that earlier iterations of Taiwanese cuisine were more rice-centered, before Chinese immigrants brought wheat farming to the island, and before the United States shipped wheat over in mass, as part of a 15-year program after World War II.

Here’s one way to look at Ms. Tung’s work: She is simply cooking the food she knows and loves, with great care and attention to detail. And here’s another: As Taiwan makes headlines and faces threats of violence from the Chinese government, as it has since Speaker Nancy Pelosi’s recent visit, cooking Taiwanese food can be a way of illuminating the nuances obscured by that news.

Ms. Tung’s cooking is bright, delicate and constantly changing to include dishes like pickled bitter melon and opo squash leaves with sesame paste. “Beef noodle soup, stinky tofu — people know those dishes,” she said. “But in Taiwan, we’re not eating those every single day.”

About once a month, the couple sells prepaid tickets to a multicourse dinner of more elaborate and labor-intensive dishes, many of them drawn from Taiwanese banquet traditions. They say they rarely have to start the conversation about Taiwan from scratch anymore.

The complexity of Taiwanese identity makes it both unique and hard to delineate in the United States.

That’s because it can involve more than a shared place of birth, language, race or lineage, and because the Census Bureau still doesn’t offer “Taiwanese” as an option on its forms. Experts have struggled to report the precise number of people who identify as Taiwanese here, but the Pew Research Center approximated a very wide range in 2019, somewhere between 195,000 to 697,000.

Taiwanese cuisine — layered, distinct, multiethnic — faces similar issues of visibility. The food of Taiwan, a self-governing democracy that has never been part of the People’s Republic of China, is often subsumed under the umbrella description of Chinese. For China’s government, which seeks unification, the conflation is convenient, and even strategic.

But considering Taiwan only in terms of its relationship to China is limiting. Taiwan’s cuisine has been shaped by many cultural forces, including the island’s Indigenous tribes, who have lived and cooked with its native ingredients for thousands of years; long-established groups of Fujianese and Hakka people; a period of Japanese colonial rule; and the wave of refugees who started arriving from China in 1949, bringing along regional foods that they adapted over time.

“Even the dishes that came from Chinese immigrants have evolved over the last 70 years to be totally unique to our island,” said Clarissa Wei, a Taiwanese American journalist who lives in Taipei and is working on a Taiwanese cookbook. “They’re the products of refugees who merged their culinary practices.”

Vivian Ku, a Los Angeles chef and restaurateur, grew up in Bakersfield, where her parents, who immigrated from Taiwan, farmed vegetables such as garlic, chives, amaranth and honeydew melons.

“I always tell our team that Taiwanese food is a representation of so many styles, on an island of so many people clustered together,” Ms. Ku said. “Yes, it can get complicated — can you call it Taiwanese, where is it from originally? — but when it hits Taiwan, it’s different. And it’s different here, too.”

An influx of Taiwanese immigrants arrived in the Los Angeles area after the Immigration and Nationality Act of 1965, settling in neighborhoods like Monterey Park, the San Gabriel Valley and parts of Orange County. The region is now home to one of the largest Taiwanese American diasporas in the country.

Ms. Ku opened Pine & Crane in 2014, after working with relatives in a beef-noodle shop and cooking at a banquet-style restaurant in Taiwan. Her small group of Taiwanese restaurants now employs about 180 people.

At the second location of Pine & Crane, which recently opened in downtown Los Angeles, a team of cooks serves one of the most delicious breakfasts in the city.

Ms. Ku has never considered her work of serving Taiwanese food to be a form of representation, or any kind of political statement, but rather an extension of her love for it. “It’s just hard for it to not seem political when you’re affiliated with Taiwan,” she said.

In her research, Ms. Wei found that the idea of distinguishing Taiwanese cuisine started to really take hold on the island in the 1980s, as the country transitioned from a military dictatorship to a democracy.

She noted a major turning point in 2000, when Chen Shui-bian was elected president and his inaugural feast celebrated Taiwanese small dishes like milkfish ball soup from Tainan City over Chinese banquet foods.

Revisiting that narrative now, and digging up its multiplicities and erasures, is an essential part of the work for so many chefs and writers. At Good to Eat Dumplings, Ms. Lin and Ms. Tung have found that through research, phone calls and even just talking about their food in depth with other Taiwanese diners, they’re learning more themselves.

On the patio, Ms. Lin weaves around the tables greeting diners, making empty plates of her wife’s minced pork noodles disappear. Someone is marveling at the Taiwanese golden kimchi — a crisp, sweet, habit-forming pile of pickled cabbage in an almost creamy slick of fermented tofu and carrots.

There are questions about the seasoning on the fried peanuts, and there are questions, always, about Taiwanese cuisine and how to define it. “It’s hard to explain,” Ms. Lin says at one point. The diners go quiet, waiting for her to go on.