Home » World News » In Coinbase’s Rise, a Reminder: Cryptocurrencies Use Lots of Energy

The stock market debut of Coinbase, a start-up that allows people to buy and sell cryptocurrencies like Bitcoin, is a watershed moment for digital money.

It also threatens to lock in a technology with an astonishing environmental footprint.

Cryptocurrencies use blockchain technology, which relies on specialized computers racing to solve complex equations, making quintillions of attempts a second to verify transactions. It’s that practice, called “cryptomining,” that makes the currencies so energy-intensive.

Researchers at Cambridge University estimate that mining Bitcoin, the most popular blockchain-based currency, uses more electricity than entire countries like Argentina do.

“All this accounts for so little of the world’s total transactions, yet has the carbon footprint of entire countries. So imagine it taking off — it’ll ruin the planet,” said Camilo Mora, a climate scientist at the University of Hawaii at Manoa.

Dr. Mora argued in a controversial 2018 paper that Bitcoin emissions alone could push global warming above the Paris Agreement target of 2°C, a level beyond which scientists warn the world will experience ever-more-catastrophic effects of climate change. (Some of the paper’s assumptions have since been called out as implausible.)

In a new paper published this month, researchers warned that, if left unchecked, Bitcoin mining in China — where an estimated two-thirds of the world’s blockchain mining takes place — could make it difficult for the world’s largest polluter to meet its climate goals.

China’s Inner Mongolia region said recently that it was moving to ban the practice, because it was hampering the province’s efforts to meet the new carbon-emissions goals set by the national government. Iran has also cracked down on Bitcoin mining, calling it a burden on its electric grid, after blackouts hit Tehran and other major cities earlier this year.

Hand-wringing over cryptomining has even reached the art world, where some artists have taken a stand over NFTs — pieces of digital artwork stamped with a unique string of code and stored blockchains — for their outsized environmental impact. 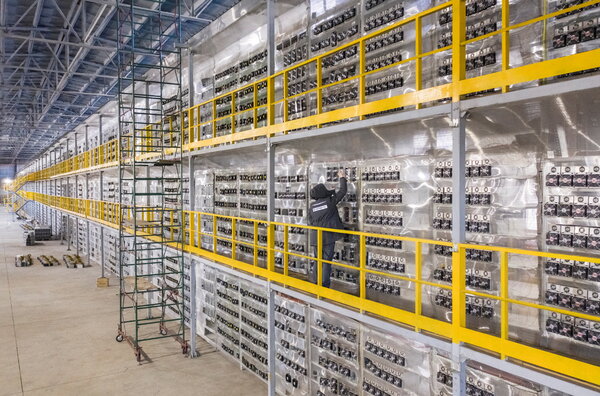 On Wednesday, shares in Coinbase, the first major cryptocurrency company to list its shares on a stock exchange in the United States, immediately soared, pushing its valuation close to $100 billion, in what was hailed by investors as a landmark moment for the growth of digital currencies.

Coinbase, on its website, calls the notion that Bitcoin is bad for the environment a “myth.” It points to finance-industry research that calls the digital currency’s energy consumption trivial compared to traditional banking. But though their use is surging, cryptocurrencies still account for just a fraction of global transactions.

Alex de Vries, who keeps track of the use on the site Digiconomist, estimates that each Bitcoin transaction requires tens of thousands of times more electricity to process than each Visa credit card transaction, for example.

Bitcoin mining’s heavy energy usage owes in large part to its reliance on what’s called “proof of work” — a computing method that’s intentionally designed to be inefficient to keep currencies transparent and decentralized.

Proof of work forces miners to compete to solve cryptographic puzzles in an intense race of trial and error, their computers together making more than 160 quintillion attempts a second to produce a new block. This competition keeps immense numbers of computers working at top speed, around the clock and all over the world.

“The mechanism of proof of work is kind of counterintuitive,” said Susanne Köhler, a researcher at Aalborg University in Denmark who has carried out life-cycle analysis of blockchain technology. “While the machines are getting more efficient, the network does not reduce energy consumption,” because an ever-growing number of miners must compete, making an ever-growing number of guesses.

There are efforts afoot to make blockchain technologies more environmentally sustainable — and to put them to use in climate policy. The nonprofit group Blockchain for Climate, for example, has led the way in developing ways to use blockchain for carbon trading — in other words, systems that allow one country, or company, to pay and take credit for carbon-emissions reductions in another country or company.

And then there is a transition to a “proof of stake” method, which doesn’t force miners to compete to add blocks to the blockchain, and instead awards miners new blocks based on how much cryptocurrency they already own. The world’s second-largest cryptocurrency by market capitalization, Ethererum, has said it is moving toward proof of stake (that switch is likely to take up to another year), and Bitcoin is expected to eventually follow.

“That reduces your emissions to almost nothing,” said Joseph Pallant, Blockchain for Climate’s founder and executive director. Cryptocurrency platforms like Tezos or Near Protocol already use proof of stake and have vastly lowered their energy use. And for individual Bitcoin users, reducing your impact through carbon offsets is another way forward, he said.

“Rather than just be like, ‘Ah, I’m going to back away and not touch it,’ I’d say dive in and then figure out what you need to do for your conscience,” Mr. Pallant said.