The big face-off isn’t until Sunday, but the pregame skirmishes have been raging on both sides of the Atlantic for days.

When Prince Harry and his wife, Meghan, present their side of a sensational royal rupture to Oprah Winfrey, it is sure to be one of the most anticipated, and most heavily-spun, television interviews in recent memory.

In tantalizing excerpts dribbled out by CBS, which is broadcasting the two-hour prime-time program, and in scalding allegations about Meghan leaked to a British newspaper, the British royal family and the self-exiled couple are maneuvering furiously before the interview airs to try to shape the narrative.

Was Meghan the victim of a cold, unwelcoming family that cruelly isolated her after she married Harry and is now defaming her? Or was she a Hollywood diva who mistreated her staff, throwing the House of Windsor into turmoil and triggering a breach between the family and one of its most beloved young princes?

All of this is playing out against the backdrop of an ailing family patriarch, Prince Philip; a revered but aging Queen Elizabeth II; and a family that is emerging from a year of seclusion during the pandemic to find the wounds still fresh from Harry and Meghan’s abrupt departure for a new life in California.

The latest shot in this public-relations battle was fired on Thursday, when CBS released a 30-second teaser clip from the interview, in which Ms. Winfrey asked Meghan how she believed Buckingham Palace would react to her opening up about her life after her fairy-tale marriage to Harry in May 2018.

“I don’t know how they could expect that after all of this time, we would still just be silent if there is an active role that ‘the firm’ is playing in perpetuating falsehoods about us,” said Meghan, referring to the royal family by a nickname often used to evoke the less high-minded qualities of the monarchy.

“If that comes with risk of losing things,” she said to Ms. Winfrey, “I mean, there’s a lot that’s been lost already.” 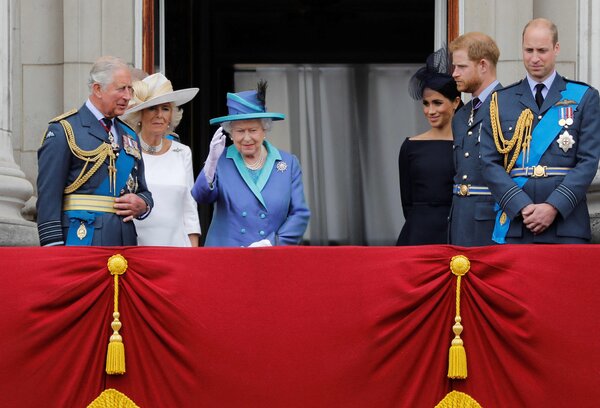 The clip seemed calculated to respond to an explosive report in the Times of London on Tuesday that a former royal aide to Meghan filed a complaint with the palace in October 2018, accusing her of bullying her staff, reducing some junior aides to tears, and driving two personal assistants out of the royal household.

A spokeswoman for the couple called the allegations an “attack” on the character of the American former actress — all the more painful because she “has been the target of bullying herself.”

Buckingham Palace, however, said it was “very concerned” about the allegations, would look into them and invited former staff members of the couple to take part in the investigation “to see if lessons can be learned.”

The spectacle of the royal family conducting a human-resources investigation of one of its most famous in-laws left longtime observers of the monarchy slack-jawed. They predicted it would lead to further embarrassing disclosures, since the palace did not act on the complaint at the time, and other people who worked in the palace might take it as an invitation to lodge their own charges of mistreatment.

“They have opened an unbelievable can of worms,” said Peter Hunt, a former royal correspondent for the BBC. “Are they really going to find her guilty of bullying? Will it be in the form of a #MeToo investigation? It really feels like the anarchists have taken over the institution.”

To some extent, the charges and countercharges represent a clash of cultures: the old-fashioned press leaks of the British media — long used by members of the royal family or their allies to settle scores — versus the publicity machine of an American television network and one of the nation’s most powerful media personalities.

CBS and Ms. Winfrey’s company, Harpo Productions, have stoked expectations for the interview, which will be broadcast in Britain on Monday by the ITV network, with peekaboo excerpts that show her seated with Harry and Meghan in a relaxed outdoor setting, but offer only glimpses of what they are talking about.

“Were you silent or were you silenced?” Ms. Winfrey asks at one point, as Meghan looks at her but says nothing. “You’ve said some pretty shocking things here,” she says at another, as dramatic music wells up.

Harry, who will join Meghan for the second half of the interview, appears briefly in an excerpt to say, “My biggest concern was history repeating itself.” That is an apparent reference to the fate of his mother, Princess Diana, who was killed in a car accident in Paris in 1997 after a high-speed pursuit involving photographers.

That experience left Harry with an abiding animus toward the British press. He and Meghan have both filed privacy lawsuits against the tabloids, and in a recent interview with the late-night talk-show host James Corden, Harry cited the relentless intrusiveness of the press as a major reason for the couple’s decision to relocate to Montecito, Calif.

Ms. Winfrey, however, is promising more than a mere recitation of the couple’s familiar press grievances. She is promising dirt.

“I just want to make it clear to everybody that there is no subject that is off limits,” she said. Her friend, Gayle King, a host of “CBS This Morning,” said this week, “I’ve heard from reliable sources, this is Oprah talking, that it’s the best interview she’s ever done.”

George F. Schweitzer, a former head of CBS Marketing, said he expected the network would spare little to promote the interview, given its combination of “three magic words: ‘Oprah. Harry. Meghan.’”

The timing of the interview, following the flagship CBS News program “60 Minutes,” would boost its ratings, he said, as will the theme, which will appeal to viewers yearning for an escape after a year of living with the coronavirus.

With that kind of advance hype, Buckingham Palace is steeling itself for a difficult evening. The royal family has a long history of warts-and-all interviews that have reverberated for years afterward.

In 1994, Prince Charles confessed he had cheated on Diana. A year later, Diana told an interviewer, “there were three of us in this marriage.” In 2019, Prince Andrew’s ham-handed defense of his friendship with Jeffrey Epstein, the convicted sexual predator, helped send Andrew into exile from public life.

This time, however, Meghan’s reputation in Britain has suffered even before she has uttered a word. The prospect of the interview with Ms. Winfrey, which could cement a narrative about her suffering at the hands of the royal family, prompted former members of her staff to speak to the Times of London about their treatment while working for the couple, according to two people with knowledge of the situation.

In October 2018, their communications secretary, Jason Knauf, notified the private secretary of Prince William, Harry’s brother, about incidents in which he said the duchess had manipulated and humiliated staff members, the Times of London said. The private secretary, Simon Case, is now the cabinet secretary, one of the most powerful posts in the British government.

Staff members were also dismayed, the newspaper said, when Meghan wore a pair of earrings to a formal dinner in Fiji that had been given to her as a wedding gift by Crown Prince Mohammed bin Salman of Saudi Arabia, three weeks after the killing of the dissident Saudi journalist, Jamal Khashoggi. An American intelligence report released this week concluded that the prince had approved the assassination.

A spokeswoman for the couple said Meghan was “deeply committed to supporting those who have experienced pain and trauma.” She did not address questions about the earrings.

In its statement on the bullying claims, Buckingham Palace said, “The Royal Household has had a Dignity at Work policy in place for a number of years and does not, and will not, tolerate bullying or harassment in the workplace.”

For Buckingham Palace to be dragged into a dispute like this is exceedingly awkward. That has sown doubts that the queen or Prince Charles are behind efforts to discredit Meghan. They are more likely to be preoccupied by Prince Philip, 99, who is recovering from a heart procedure in a London hospital.

But relations between William and Harry continue to be deeply strained, according to people with ties to the palace. Longtime observers of the royal family said that when disputes like this erupt into the open, it usually suggests that someone — either senior palace officials or a family member — did nothing to stop it.