Home » World News » In the Philippines, Rodrigo Duterte threatens to jail those who refuse shots. 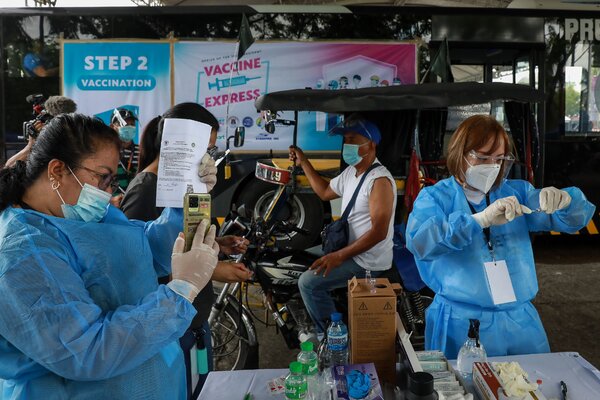 President Rodrigo Duterte of the Philippines has threatened to send anyone who refuses a coronavirus vaccine to jail, as the country grapples with one of the worst current outbreaks in Asia.

“There is a crisis being faced in this country. There is a national emergency,” Mr. Duterte said during a weekly television program late Monday, which included an expletive-laced rant against those who chose not to get a vaccine.

“If you do not want to get vaccinated, I will have you arrested,” Mr. Duterte added. “Don’t force my hand into it, and use a strong-arm method. Nobody wants that.”

He continued on to urge anyone who did not want to be vaccinated to “leave the Philippines,” and go elsewhere, like India or America.

Mr. Duterte, a strongman leader who has long used thuggery, threats and calls for violence as part of his political persona, said he was “exasperated” by citizens who chose not to heed the government on vaccination, before ordering all local officials to look for those refusing to be immunized.

Edre Olalia, president of the National Union of Peoples’ Lawyers, said that jail time for those refusing shots would be illegal.

“There is no law that specifically empowers the president to order such arrests for said reasons, even if this is a health emergency,” Mr. Olalia said.

Mr. Duterte’s spokesman, Harry Roque, a former rights lawyer, said on Tuesday that in Philippine jurisprudence, a president can compel compulsory vaccination. But he said that this should be supported by legislation.

The Philippines is currently struggling to tamp down one of Southeast Asia’s worst Covid-19 outbreaks, with the government on Monday reporting 5,249 new cases, bringing the total number of cases in the country to 1.3 million.

The authorities have been trying to acquire more vaccines and have secured a supply contract for 40 million shots from Pfizer-BioNTech. Currently, the country has some 12.7 million doses, most of them from Sinovac of China.

But the Philippine vaccination program has been hobbled by distribution bottlenecks, as well as public fears. In 2017, the government halted a dengue immunization program after shots developed by the French drug firm Sanofi were linked to a severe form of the disease.

More than 830,000 school children had received the shot and dozens of deaths were reported by the time it was halted.