A special court in the Indian city of Lucknow has ruled that the demolition of the 16th-century Babri mosque in 1992 by Hindu rioters was not preplanned, acquitting senior leaders from the governing Bharatiya Janata Party (BJP) for lack of evidence.

All the 32 people were accused of criminal conspiracy and inciting a mob to tear down the Mughal-era mosque in the northern town of Ayodhya, located about 135km (84 miles) east of the state capital, Lucknow, in 1992. The demolition sparked nationwide communal violence that left some 2,000 people dead, most of them Muslims.

Zafaryab Jilani, a lawyer for the All India Muslim Personal Law Board

Handing down its verdict after a lengthy legal battle, the court said there was not enough evidence to directly tie any of the accused to the violence, defence lawyer Manish Kumar Tripathi said.

“The court did not accept the evidence, it was not strong enough,” Tripathi told reporters at the court.

IB Singh, another defence lawyer, said investigators could not prove the authenticity of audio and video evidence submitted in the case and the judge held that the case lacked legal evidence that the accused were part of any conspiracy. 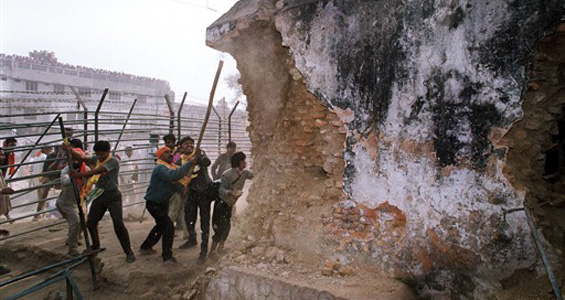 Hindu hardliners attack the wall of the 16th century Babri mosque with iron rods on December 6, 1992. [File: Douglas E Curran/AFP]“It is a moment of happiness for all of us, we chanted ‘Jai Shri Ram’ [hail Lord Ram] after court verdict,” Advani was quoted as saying by the local PTI news agency.

Joshi said: “The truth has triumphed.”

Another defendant who was acquitted, Jai Bhagwan Goyal, said: “We had done nothing wrong. The whole of India is happy. Lord Ram’s temple is coming up in Ayodhya city.”

‘We will seek remedy’

The four BJP leaders acquitted — Advani, Joshi, Bharti and Singh — have said the mosque’s demolition was a spontaneous eruption by angry Hindu crowd.

The court in its verdict said that “anti-social elements” tried to demolish the mosque and that the accused leaders tried to stop them, the New Delhi Television news channel reported, citing the court order.

The Muslim community will challenge the acquittals in an appeals court.

The court had ignored all the evidence in Wednesday’s case, said Zafaryab Jilani, a lawyer for the All India Muslim Personal Law Board.

“This is an erroneous judgement as it is against evidence and against law,” said Jilani. “We will seek remedy,” he told Reuters news agency. 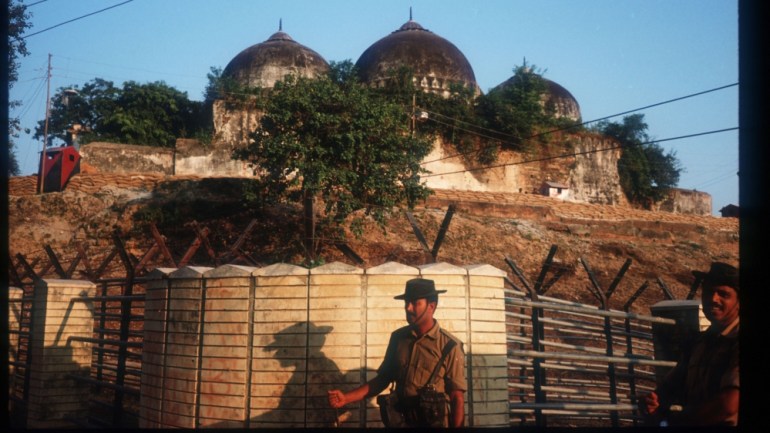 On December 6, 1992, tens of thousands of Hindus gathered for a rally near the disputed site and groups of them climbed the mosque and demolished it with axes and hammers [File: Robert Nickelsberg/Liaison]In its ruling last November, the top court ordered the entire disputed area of 2.77 acres (1.1 hectares) to be allocated to Hindus for the construction of the temple.

The verdict dealt a defeat to Muslims, who also claimed the land. The court did say the demolition of the mosque had been a criminal act. It also asked the government to provide five acres (two hectares) of land to Muslims at another location to substitute the land they had lost.

Last month, Modi inaugurated the construction of the temple, which was one of the promises of the BJP had made when it was founded in the 1980s. The party rose to national prominence on the back of the temple movement.

Many Hindus believe the 16th-century mosque, named after Mughal emperor Babur, was built at the place where Ram was born in Ayodhya.

On December 6, 1992, tens of thousands of Hindus gathered for a rally near the disputed site and groups of them climbed the mosque and demolished it with axes and hammers.