An Indigenous community leader in eastern Canada is renewing his call for concrete action from the federal government after a lobster pound in the province of Nova Scotia was destroyed overnight Saturday.

In a statement shared by APTN News, Mike Sack, chief of Sipekne’katik First Nation, said the fire at the lobster pound in Middle West Pubnico, a small fishing village 270km (168 miles) west of Halifax, demonstrates “the need for greater police presence in the region”.

Sack said the storage facility is “owned by a friend and ally of Sipekne’katik”.

“This should never have happened and the people responsible should be brought to justice,” he said. “I am once again calling on Prime Minister [Justin] Trudeau and the RCMP (federal police force) to dedicate the necessary resources to this region to protect everyone.”

Nova Scotia RCMP said it was investigating the fire as “suspicious”.

“The fish plant incurred significant damage, it was not occupied at the time and no employees were injured, a man is in hospital with life-threatening injuries believed related to the fire,” the police said in a statement Saturday.

Tense confrontations have taken place during the past several weeks between commercial and Indigenous fishers in Nova Scotia, who are exerting their right to fish outside Canada’s federally regulated fishing season.

The Mi’kmaw people have a right under Canada’s constitution and treaties signed with the British Crown in the 1700s to fish in order to maintain a “moderate livelihood”.

But while that right was affirmed by the Supreme Court of Canada in 1999, the court never defined what a “moderate livelihood” means in practice. 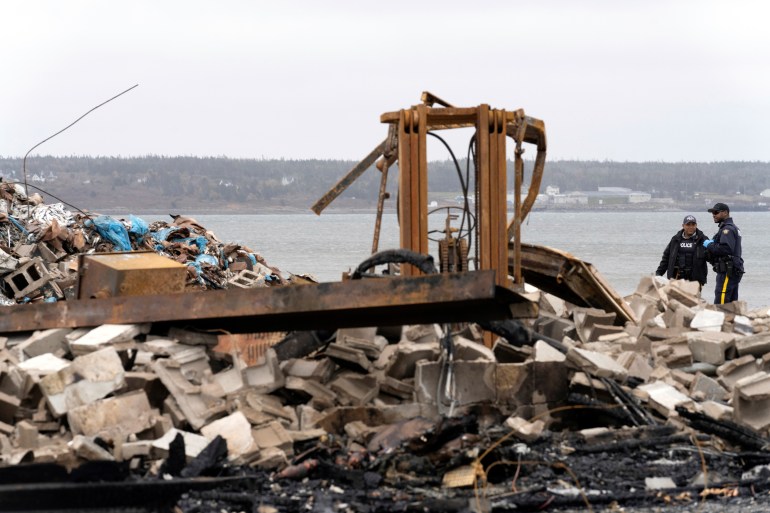 RCMP officers investigate the remains of a lobster pound that was destroyed by a fire in Nova Scotia [John Morris/Reuters]Sipekne’katik First Nation launched its own moderate livelihood fishery last month to be able to harvest outside of the season, prompting the ire of non-Indigenous commercial fishers in the province.

A man has been charged in relation to an assault on Chief Sack on October 14, the RCMP also said on Saturday.

Police have been criticised for appearing to stand by during last week’s acts of violence against the Indigenous fishers, while Indigenous leaders across Canada have called on the Nova Scotia and federal governments to do more to ensure people are protected.

Canada’s public safety minister, Bill Blair, said he was “confident the unacceptable acts of violence will be thoroughly investigated and the perpetrators will be held to account”.

“The threats, violence and intimidation have to stop. We all need to acknowledge that a lasting resolution to this dispute can only be concluded if it is rooted in the recognition of legitimate Mi’kmaw treaty rights,” Blair said in a statement.