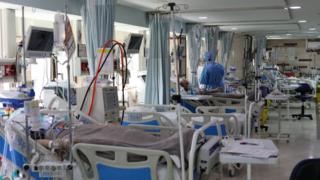 Iran’s official death toll from the coronavirus disease has passed 3,000.

Health ministry spokesman Kianush Jahanpour reported 138 fatalities in the past 24 hours, bringing the total to 3,036. The number of confirmed cases also rose by 2,987 to 47,593, he added.

There are concerns that the actual figures are much higher.

Mr Jahanpour also said Iranians had mostly heeded a request not to leave their homes for a traditional picnic on the last day of the Nowruz holiday.

The authorities closed all parks and public gardens on Wednesday and deployed police to stop people entering them in order to reduce the spread of Covid-19.

“People have co-operated with us and those who have violated laws and regulations will be penalised and we are happy that people have stayed at home,” Mr Jahanpour told reporters.

Iran’s leaders have resisted imposing lockdowns despite it being one of the world’s worst-hit countries. They have insisted all necessary measures are being taken.

What has the Iranian president been saying?

Hassan Rouhani told a cabinet meeting on Wednesday that Iranians had done “great work” and that the outbreak appeared to be receding in all provinces.

He also asserted that Iran had been “much more successful than many other countries in the fight against this disease” despite facing US sanctions.

Mr Rouhani said Americans had nevertheless missed a “historic opportunity” to show goodwill by lifting the sanctions at the start of the outbreak in Iran.

“It is a good time now for them to apologise for their wrongdoing. It is humanitarian issue and nobody would rebuke them and ask why they retreated.”

“This was the best historic opportunity for the Americans to turn away from their wrong path and for once to say to the Iranian nation that they are not an anti-Iranian people,” he added.

The US has insisted that medicines and medical equipment are exempt from its sanctions, which were imposed after President Donald Trump abandoned a nuclear deal in 2018. But restrictions on Iran’s banking system and an embargo on its oil exports have limited Iran’s ability to purchase items.

When asked on Tuesday about whether the US might consider giving Iran and others countries sanctions relief, Secretary of State Mike Pompeo told a news conference: “We re-evaluate all of our policy, including our sanctions policy, constantly. If we conclude that it’s in the best interests of American people to alter any of those policies, we’ll certainly do that.”

But he added: “The United States, the American people, are working diligently in each of these countries that you’re thinking of as sanctioned nations to try and assist getting humanitarian assistance into those countries.”

On Tuesday, France, Germany and the UK said they had sent medical supplies to Iran in the first transaction conducted under the Instex financial mechanism set up last year to get around the US sanctions.

What are the latest developments around the world?