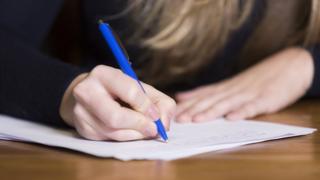 An Irish teaching union has demanded greater legal protection for teachers who have been tasked with calculating exam grades after tests were cancelled.

The Leaving Cert exam – Ireland’s equivalent of A Levels – will not take place this summer due to the pandemic.

The government issued guidelines on how to estimate results, which includes a “State indemnity” for teachers.

But one union expressed fears teachers could still face personal costs if sued by students unhappy with their grades.

The Association of Secondary Teachers, Ireland (ASTI) has advised its 17,000 members not to co-operate with the government guidelines until there is a guarantee of “full indemnity” against legal costs.

“Unfortunately, and upon legal advice, the indemnity that has been offered to teachers thus far falls short of what is required and could potentially lead to personal liabilities for costs,” a statement from ASTI said.

ASTI added the current position was “unacceptable” and advised its members “not to undertake any work on the process until this issue is resolved”.

However, a separate union – the Teachers’ Union of Ireland (TUI) – welcomed the guidelines, saying there was “clear legal indemnity for teachers and schools”.

The State indemnity is subject to conditions and will only apply when a teacher “has acted bona fide” meaning they have “made every reasonable effort” to calculate grades within government guidelines.

The grading guidelines also warn students and their parents against trying to influence their grades, warning they “must not under any circumstances” contact their teachers to discuss their decision-making process.

It also rules out the giving or accepting of teachers’ gifts, addressing concerns that attempts would be made to bribe teachers into giving students better grades than they deserve.

This measure had been specifically requested by schools and teaching unions who have concerns about inappropriate approaches from parents and students.

Several teachers have complained to Irish broadcaster RTÉ of unwelcome contacts since the government announced two weeks ago that grades would be based on teacher assessments rather than exams.

One principal said his school received 50 emails over the weekend that immediately followed the announcement.

“Between the Friday and the Monday, I had 17 missed calls from parents, trying to explain why their darling had not worked so hard and wondering what they could do now,” the head teacher said.

The principal of another school told RTÉ he was travelling to a neighbouring town to do his shopping in order to avoid chance meetings with pupils and their parents.

The guidelines state: “Teachers and schools must not be subjected to any type of influence, inducement (including gifts), pressure or coercion by a parent/guardian, student or any other person in relation to a student’s mark or ranking either before or after it has been assigned.

“This includes any financial, economic or other personal interest which might be perceived to compromise the teacher’s impartiality and independence in the context of the decision-making process.”