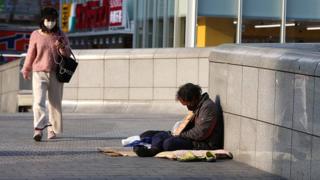 Japanese authorities are rushing to house thousands of homeless people following the closure of internet cafes in several major cities.

The cafes have become a common destination for those without secure housing.

They’re often open around the clock and many feature private booths, showers and entertainment, including games.

But the businesses have been ordered to close their doors to help contain the spread of coronavirus.

While Japan officially has a low homeless rate compared with many other developed nations, more than 4,000 “internet cafe refugees” reside in the capital, Tokyo.

City officials say they have begun providing them with hotel rooms and other forms of temporary accommodation. In neighbouring Saitama, authorities have also repurposed a sports hall for 200 people.

But Kazuhiro Gokan, a consultant with a local homeless support group, told the newspaper that many people had been turned away because of “a misunderstanding among administrators”.

Japan has a relatively small number of infections compared with other countries – 6,748 confirmed cases and 108 virus-related deaths as of Sunday. But there are concerns a recent surge in cases in Tokyo could lead to a major outbreak.

Prime Minister Shinzo Abe has declared a month-long state of emergency, covering Tokyo, Osaka and five other prefectures. The governors of these prefectures now have the power to close schools and businesses, but no legal authority to order citizens to stay at home.