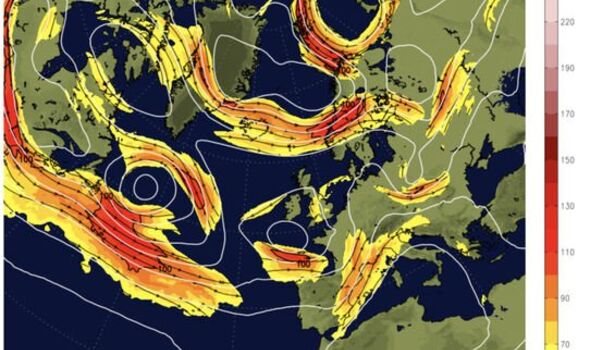 Southern Britain is in the firing line as boiling air from France–currently wilting in unprecedented heat–sparks a ‘battle’ between weather systems.

Fragmented branches of a fractured jet stream will swarm the UK as meteorologists pull their hair out to pinpoint the time and location of downpours.

The jet has split sending one ‘arm’ to the west and another to the south, according to the Met Office.

Meteorologist Alex Deakin said: “An arm of the jet stream is pushing to the west and there is a dip in the jet stream further south and it is how these combine that is the source of uncertainty.”

“It could allow warmer air to push north, but the more likely scenario is that we see plumes of warm air bringing the risk of showers across the south on Saturday and Sunday.”

“If you’ve got plans for Saturday or Sunday that involve being outside, please keep up to date with the forecast.”

Government meteorologists last night issued thunderstorm warnings across southern Britain ahead of inches of rain, flooding and mayhem on the roads and travel networks.

The weather will break down in parts later tonight sparking warnings for ‘dangerous’ conditions tomorrow.

Britons heading to coasts, beaches and waterways are urged to take extra care while drivers brace for long delays.

“We look to France for the origin of some pretty hefty downpours and thundery outbreaks.”

“A plume of warm air arriving from the Continent could bring some significant downpours and long periods of rain and thunder.”

“From Saturday evening, it will be the south and the southeast that will be most affected as this unsettled weather spirals up from France.”

Storms brewing on the Continent will ‘get their acts together’ through the next 24 hours, warned Mr Dale, author of Weather Or Not? and an expert in weather impacts and safety.

He said: “A battle between high pressure and low pressure is going to be part of the driver for the change to what could turn out to be dangerous weather conditions, especially for those planning outdoor activities later in the weekend.”

“Most at risk will be regions south of the M4, possibly through the Home Counties and into the Midlands.”

Senior government meteorologists are keeping a keen eye on France through the next 36 hours.

It comes as the country bakes in the highest temperatures ever recorded with thermometers still rising.

Met Office deputy chief meteorologist Rebekah Sherwin said: “A plume of warm air, currently across the Continent, then pushes north over the UK through the weekend.

“There remains some uncertainty on how far north it will stretch but southern areas are likely to see a spell of showers on Saturday and Sunday, which could turn heavy and thundery at times.”

Emergency services are warning people to take care while outdoors with thousands expected to flock to the coasts.

“We want everyone to enjoy their trip, but we also want to make sure people stay safe and know what to do in an emergency.”