The last of three female opposition leaders still in Belarus has said the “wind of freedom” is blowing, but that people in her country need to achieve regime change without outside help.

Maria Kolesnikova condemned a decision by embattled strongman Alexander Lukashenko to pick up the phone to Russia‘s Vladimir Putin on Saturday following a week of unprecedented protests against his claim of victory in presidential elections.

However, she did not call for the UK, the EU or other western nations to step in, believing the crisis can only be resolved internally.

“It is very important we have and feel this support, but also with this situation with Russia we have to make it by ourselves,” Ms Kolesnikova told Sky News.

“It is really a very [important] point for Belarusians – we do everything by ourselves.

“Thanks for everybody who supports us, but now it is our history and it is our lives and it has to be in our hands.”

He was declared the winner with a suspiciously high 80% of the vote, compared with just 10% for Ms Tikhanouskaya.

The outcome prompted the three women to cry foul, but Ms Tikhanouskaya had to flee to neighbouring Lithuania after coming under pressure from the authorities.

Ms Tsepkalo escaped to Russia, with Ms Kolesnikova the only one staying in Belarus.

She said she did not feel afraid. 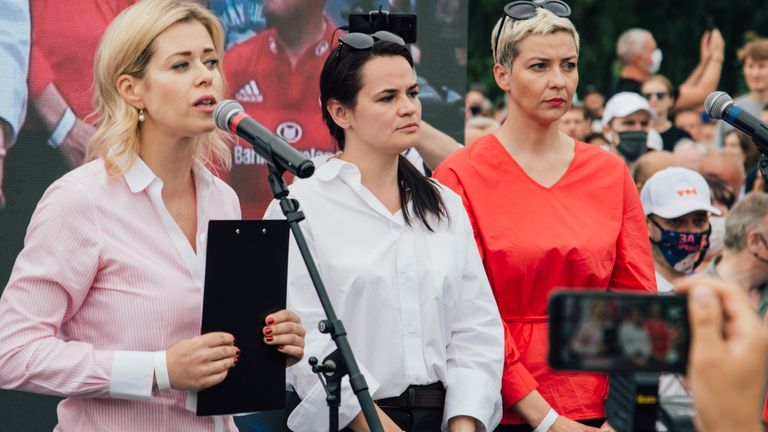 “When I go to the street and speak to people, I feel not only safe I feel also the great love of Belarusians. I am stronger every time I speak to people.”

She is pushing for a dialogue between opposition figures, other members of Belarusian society and the regime.

“We feel this wind of change or wind of freedom. Freedom is in the air. People are going to protest. They would like to change president and have new elections,” she said.

But she indicated she was strongly opposed to any violence, saying it was tragic that two protesters had died in the unrest.

“I don’t like it and that is why I am also ready to start a dialogue with the authorities because for me personally it is very important that this violence has to be stopped,” she said.

Riot police used rubber bullets, batons, and mass detentions in an attempt to crackdown on the dissent. It prompted widespread anger – and a rare apology from the Interior Ministry.

But Mr Lukashenko does not appear to be willing to speak with his opponents, choosing instead to call Mr Putin.

He said the Russian leader promised to help him secure the country if necessary – an ominous sign for those who fear the prospect of Russian forces moving into Belarus to help shore up the regime.

“He tried to ask for help of Putin,” Ms Koleniskova said.