Home » World News » Line holders are paid to wait all night outside a motor vehicle office. 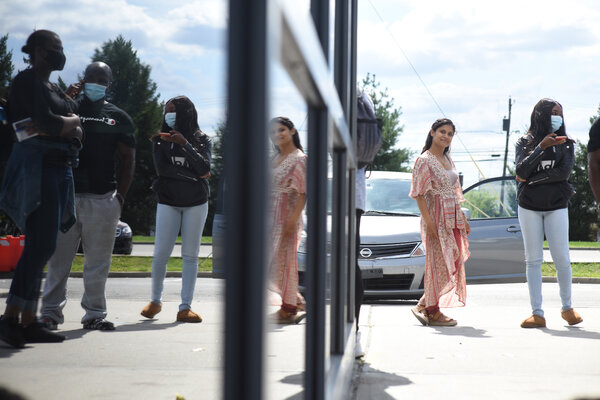 In a New Jersey suburb, a woman sets up a tent around 8 p.m. outside a state Motor Vehicle Commission office. She will spend the night there, accompanied by her 4-year-old son, until just before the office opens at 8 a.m. The woman, Sumbal Nadeem, doesn’t need a driver’s license or anything else from the agency.

But she does need money. She is being paid $150 to hold a place in line by a motorist who needs a car registration.

The pandemic has spawned a new class of worker in New Jersey: line holders who, for a fee, will wait for hours, sometimes all night, outside a branch of the Motor Vehicle Commission — which was closed for four months — until whoever hired them comes to take that place right before the office opens.

The Motor Vehicle Commission has been overwhelmed by demand since it reopened in early July, after having shut down in March during the state’s lockdown.

Even after making some services available online and pushing back the expiration dates for certain documents, the agency’s 39 locations — where paperwork is processed — have been inundated by customers. Lines stretch for blocks in the wee hours of the morning.

Because of capacity limits to protect public health, offices often start turning people away by mid- or late morning. The agency itself has been hit by the virus, with some offices forced to close for two weeks after employees tested positive.

Gov. Philip D. Murphy has acknowledged the aggravation many motorists have experienced, especially as temperatures drop. “Folks are frustrated by long lines, and so am I,” the governor recently told reporters.

While these struggles have been maddening to many, for others they have created an opportunity to make money at time when New Jersey has only added back about half of the 800,000 jobs it lost in March and April.

Websites like Craigslist and Facebook Marketplace are filled with people offering to stand in line, charging $50 to $600.