Storm Darcy has now been named and the system is forecast to bring widespread snow to South East England, including London. Across the UK this weekend the Met Office has issued several weather warnings for snow, rain and ice in anticipation of Storm Darcy’s arrival. Temperatures are expected to stay in the low single figures for much of the UK this weekend, and many areas are forecast to see snow.

Heavy snow as a result of Storm Darcy is expected to start falling over the capital from Saturday evening onwards.

A snow risk map from NetWeather reveals London could see some snow from 9pm tonight, with it starting to get heavier from midnight.

The Met Office has issued a yellow snow warning across London and the South East from 11pm on Saturday until 6am on Monday. 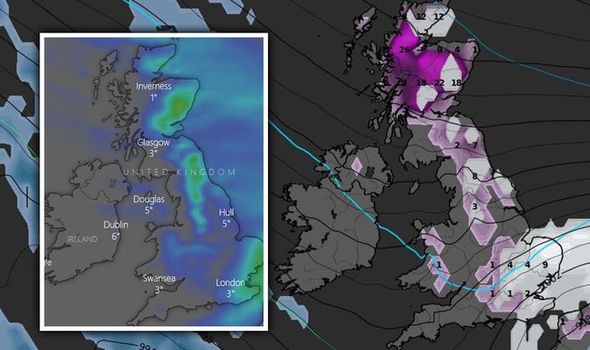 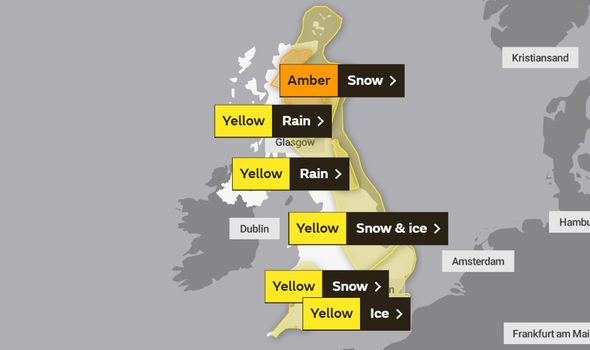 The warning reads: “Rain will turn increasingly to snow during Saturday evening, with snow likely to become widespread, occasionally heavy and persistent by Sunday morning.

“There remains some uncertainty with the location of the heaviest snowfall and therefore the greatest disruption, most likely towards the east coast.

“Widespread accumulations of 1 to 3cm are likely, with 5 to 10cm possible in places. Over higher ground and across eastern areas, e.g. The Kent Downs, 15 to 20cm is plausible.

“A brisk easterly wind, strong along eastern coasts, may add to travel disruption.” 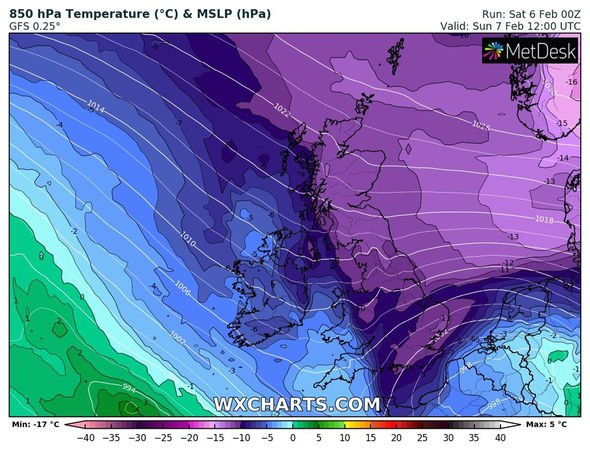 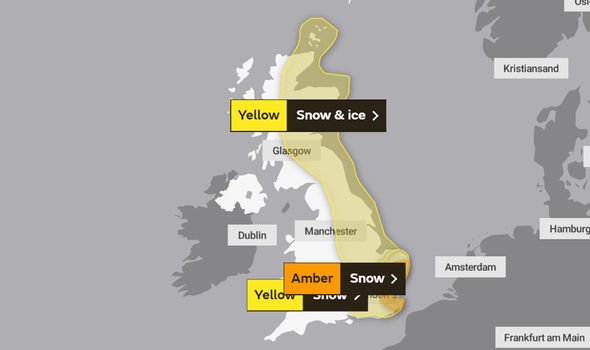 By 6am on Sunday, weather charts show a 100 percent chance of snow across the Capital along with surrounding areas such as Kent and Essex.

This high risk will continue through the day before dissipating at about 9am on Monday.

BBC Weather forecast for London says the persistent snow will start at 2am in London, continuing through the night and until 6pm on Sunday.

The forecast reads: “The heaviest snow fall will tend to ease through Sunday night, but strong easterlies will continue pushing sleet and snow showers through Monday with further snow accumulation likely in places.

DON’T MISS:
Universal Credit claimants may get £25 boost with Cold Weather Payment [INSIGHT]
Is it going to snow in London? Latest snow risk maps and charts [FORECAST]
‘Coldest snap of the season’ across Europe as Arctic blast brings snow [VIDEO] 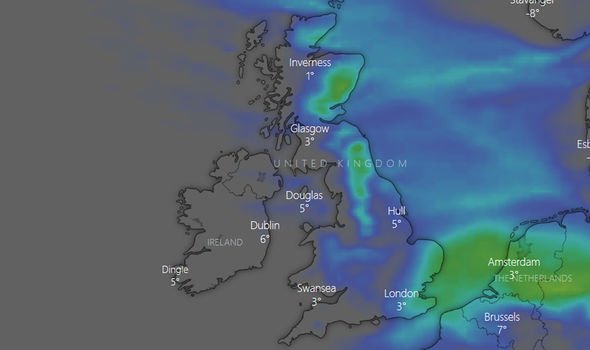 “Tuesday will be cloudy and cold, and wintry showers may ease for much of the day. Winds will become lighter on Wednesday and it should be a brighter day.”

Storm Darcy is expected to bring widespread disruption this weekend, with much of the UK under a warning at some point.

Parts of Scotland are under a severe amber snow warning on Saturday, while parts of northern England and Scotland are also under yellow rain warnings.

A widespread yellow snow and ice warning has been issued for much of Scotland, northern England and the Midlands for Saturday and Sunday. 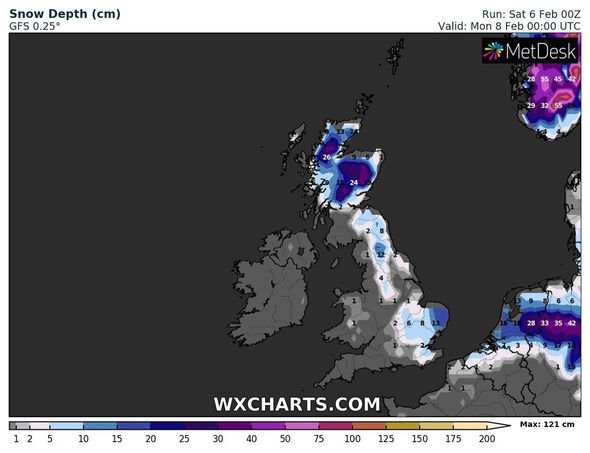 Parts of Wales and the South West are also under a yellow ice warning for Saturday morning.

Met Office Chief Meteorologist, Paul Gundersen, said: “The UK is in for a notably cold and snowy period over the next week, with very cold air in place over the whole of the UK by Sunday.

“Showers will see snow accumulating across eastern areas. Within the amber warning area, more widespread snow is expected and we could see 5-10cm of snow quite widely, with a chance that a few places could see 20cm or more.

“With such severe weather around it’s important to keep up to date with the latest forecast.”

WXCHARTS snow depth maps forecast much of the UK will see widespread snow accumulation this weekend.

By Monday morning, the heaviest snow depth is forecast across Scotland, but considerable snow is also mapped for London and other parts of South East England.

Eastern parts of England could see as much as five inches (13cm) of snow accumulation by Monday morning.

Windy new snow forecast maps show some 10cm, or approximately four inches, of snow could fall over parts of London over the next three days.