Sylvia Wu, who died this week at 106, reshaped the tastes of Los Angeles power diners.

In the mid 1970s, as the Pritikin diet drifted over the Westside of Los Angeles like a bland and joyless cloud, Sylvia Wu strategized. How could she keep big-ticket dishes like Peking duck on the menu at Madame Wu’s Garden when A-listers wanted more low-fat, low-salt, low-sugar foods?

Ms. Wu devised a plan: Air-dry the ducks as usual, but render off as much fat as possible in the roasting process. Leave nothing but meat, wrapped in the finest, thinnest, crispiest shell of burnished skin, with no chewy fat underneath. She called this version, pretty honestly, “lower-fat” Peking duck.

Ms. Wu, who died last month at the age of 106, had a knack for culinary improvisation. At Madame Wu’s Garden, which she opened in 1959 and ran for nearly 40 years, her menus were constantly evolving, but peppered with regional deep cuts and then-hard-to-find dishes. To diners who’d never had Peking duck, the restaurant represented an imagined ideal of tradition and authenticity, but that image obscured her more complex work: Ms. Wu’s approach as a restaurateur was kinetic, profound and always strategic.

Her enthusiasm for the new was as strong as her reverence for the old, and she was always landing on another way to please her audience, grow her business and show off the finesse and beauty of Chinese cooking. She had moves.

At the height of her career, she appeared on television, taught sold-out cooking classes and wrote several books. She was a celebrity herself, more glamorous than many of the Westside power diners who came in. With her hair up in a glossy, braided bun, driving a Rolls-Royce Silver Cloud (vanity plates: “MMEWU”), she wore impeccably tailored clothing, with a preference for silk, oversize tinted glasses and several huge, almost incandescent cocktail rings. 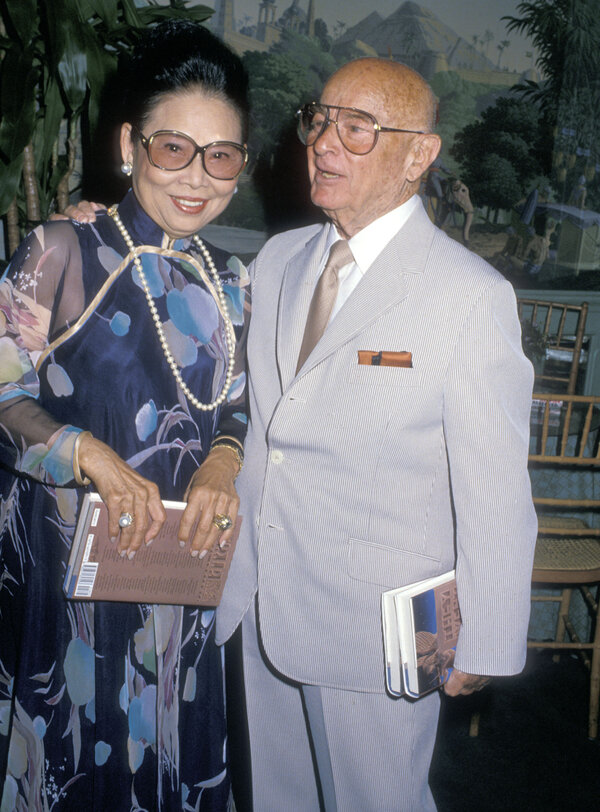 “Chinese friends would criticize the food, saying it wasn’t authentic,” she told The Los Angeles Times in 1998. “But I told them, ‘Look around. Do you see any Chinese dining here?’”

Ms. Wu was an immigrant from China who spoke fluent, accented English, and while authenticity was projected onto her, over and over again, she never seemed to chase it or measure herself by it.

Her regulars included Frank Sinatra and Mia Farrow, Elizabeth Taylor, Robert Redford and Cary Grant. When Mr. Grant asked her for a “Chinese chicken salad” one night, she made a dish of fried won ton skins, rice noodles and shredded chicken, packed with scallions and dressed in mustard, soy sauce and sesame oil, loosely based on a banquet dish she remembered eating as a child.

It was so popular, she added it to the menu, published the recipe in local newspapers and included it in her first cookbook. Ms. Wu helped write the blueprint for American Chinese chicken salad as we know it, more than a decade before Wolfgang Puck put his own version on the menu at Chinois, his French-Chinese restaurant still open in Santa Monica.

When Madame Wu’s first opened, chop suey houses still ruled. Ms. Wu was a part of a wave of restaurateurs, including Joyce Chen who opened Joyce Chen Restaurant in Boston in 1958, and Cecilia Chiang, who opened the Mandarin in San Francisco in 1962, who worked to expand ideas of their cuisine. And while it was powerful to shift the perception of Chinese food as strictly working-class fare, it could be frustrating.

“I am pleased that journalists from the Western world were impressed by the excellence of Chinese cuisine,” she wrote in her 1973 cookbook, just after President Nixon’s visit to China, and I hear the words between gritted teeth. “But at the same time I am confused and just a little indignant over the ‘discovery’ that the Chinese are excellent chefs.”

Fifty years later, and that feeling Ms. Wu identified is more prevalent than it should be, still driving conversations around food and media, where cuisines are easily flattened and misrepresented — even through praise.

Sylvia Wu was born in Jiujiang, China, and raised in a wealthy family. As a child, she wasn’t allowed into the kitchen, where a wood-burning stove spat flames and ash under a wok the size of a card table. The kitchen was run by the family’s two cooks, who were managed by her grandfather. Ms. Wu lit a stove for the first time as an adult in New York, where she attended Columbia University and met King Yan Wu, who she would go on to marry.

She learned to cook a deeper repertoire of Chinese dishes after her mother-in-law sent her back from a trip to Hong Kong with one of the family’s cooks, who taught her how to plan menus, shop and prep. Most of Ms. Wu’s wealthy Chinese friends in Southern California already employed Chinese cooks in their homes — they didn’t go out to restaurants for Chinese food.

Ms. Wu didn’t either. She was appalled by the food at American Chinese restaurants, and had the idea to build something closer to the places she went to dinner in Hong Kong — extravagant, fun, a little bit flashy. In 1959, her husband reluctantly gave her $10,000 to give it a go.

It was modest at first, with very little décor and no liquor license. But after a few years, she expanded Madame Wu’s Garden into a 11,000-square-foot space on Wilshire Boulevard that could seat 300 people. She made it dazzle with pagoda-style architectural details, stone waterfalls, imported art and a sculpture on the ceiling that rippled with gold. The aesthetic was quickly imitated, and co-opted by white restaurateurs.

The cooking classes she hosted at the restaurant doubled as testing sessions for her first cookbook. Some recipes were complex and demanding. Others had a decidedly semi-homemade feel to them. Many were a bit of both.

To make Ms. Wu’s Peking duck, for example, you needed to find a whole, freshly killed bird and clean it inside and out, then sew it shut with wire, creating a handle around the neck so it could be strung up and air-dried. A project! But there was no need to make bao from scratch. Ms. Wu suggested a tube of oven-ready biscuits, such as Pillsbury’s Butterfly Dinner Rolls. Split in two, cooked in a steamer, they were her shortcut to soft, pillowy buns.

“Chinese people do not show affection by kissing and hugging,” she wrote, “but rather by preparing special dishes for those they want to please.”

She might have been explaining her own work, pointing to the more tender, imperceptible mechanics behind her generous sense of hospitality. She might have been remembering how in Jiujiang, as a little girl, the moment her grandfather got word that freshwater crabs were in season, he headed to the market to pick some out, and prepared them himself.

At the family dinner, he set the platter of crab directly in front of Ms. Wu. Fresh water crabs were her favorite, so she recognized this for what it was: a universal gesture of love.