The Met Office has warned people across northern parts of the UK about the imminent arrival of snow and strong winds. Snow, hail and rain will be spread across the Scottish highlands throughout the bank holiday weekend, it warned.

Snow is expected to fall across northern Scotland on both Easter Sunday and Easter Monday.

Aberdeen, Stirling, and Strathclyde will be most affected by the blizzard conditions.

The Met Office has issued a yellow warning for all of northern Scotland ahead of the Easter break.

It’ll be caused by a freezing cold northerly wind that will move across the UK. 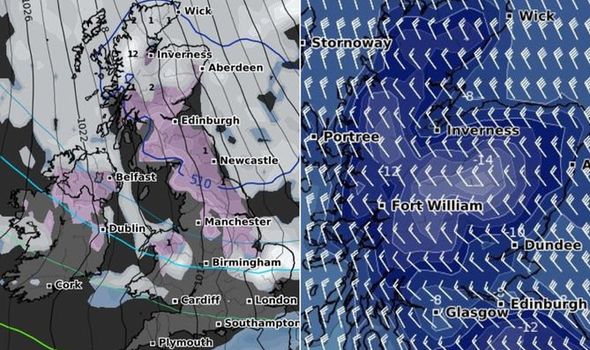 Strong north/northwest winds will be spreading the snow and hail across the highlands.

The highest-laying areas could see up to 15cm of snow by Monday morning, the Met Office revealed.

People travelling on Easter Sunday and Monday may be affected by the snowfall.

Trains and buses may take longer than usual to reach their destination.

The yellow warning read: “A very cold northerly airflow will become established across the UK through Sunday night and Monday morning.

“Very strong north to northwest winds will spread hail and snow showers inland across many areas, but the most frequent showers will affect northern Scotland.

“Here, 2-5cm may accumulate at low levels away from north-facing coasts, with 5-10cm above 150m, and 15cm possible on highest ground above 300m.

“The strong winds will cause drifting of lying snow, and blizzard conditions at times on higher ground.” 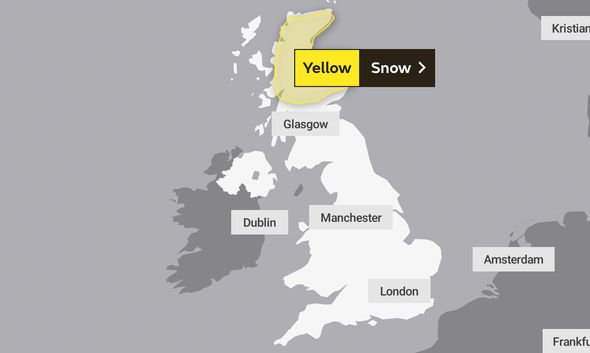 Which parts of the UK are affected by the yellow warning?

Elsewhere in the UK this weekend, eastern and central parts of the country can expect plenty of cloud cover and a few foggy patches.

Saturday will be largely dry for most of England, with some sunny spells across the west.

Easter Sunday is likely to start with some fine weather, before a burst of rain moving toward the south.

The rain will be accompanied by strong winds as well as a little sunshine peeping through.

Although Scotland is affected by snow warnings, the southern parts of the UK are currently basking in particularly warm weather.

Temperatures reached 24.5 degrees Celsius earlier this week in London and the South East.

It was the UK’s warmed March day in 53 years on Tuesday, with the Met Office predicting the record could be broken later in the week.

The Met Office described the climate as “exceptionally high” for this time of the year.