Hot temperatures have hit the UK today, and these are looking to continue into Friday with up the mercury forecast to reach 24C. Despite social distancing measures, Britons have been soaking up the sun in their gardens and on balconies.

Throughout April, temperatures have been above average, with hot weather dominating the forecast.

On average, temperatures have been around 2.5C normal during April.

Now more hot weather is on the card for Friday, before temperatures cool off slightly this weekend.

An area of high pressure is the cause for the warm weather and bright sunshine across the UK.

Read More: UK weather to be as hot as SPAIN with sizzling 23C weekend ahead 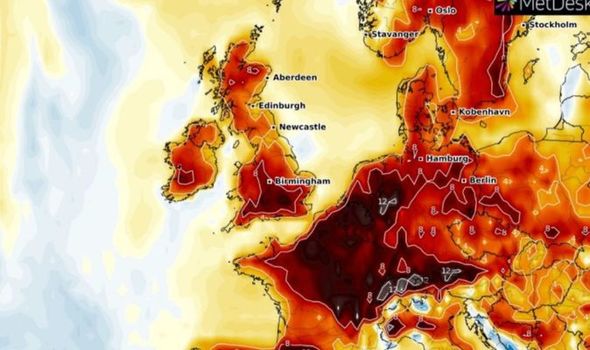 Met Office forecaster Greg Dewhurst said: “There will be a bit of fog to start the day on Thursday, but that will clear up pretty quickly and there will be bright, warm sunshine across the whole UK.

“This will be the same for Friday, which could be hotter in some areas.

“This is because of a large area of high pressure that is hanging north of the UK.

“It also helps that there has been consecutive days of clear, hot days that have kept it going.” 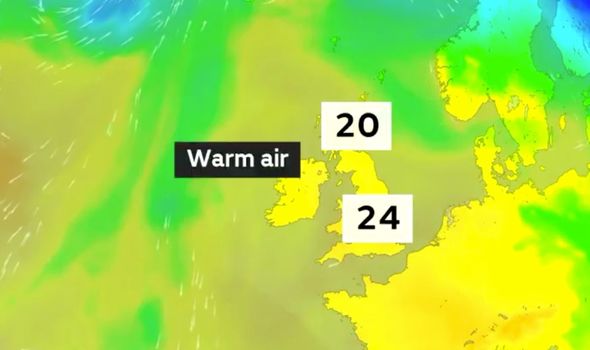 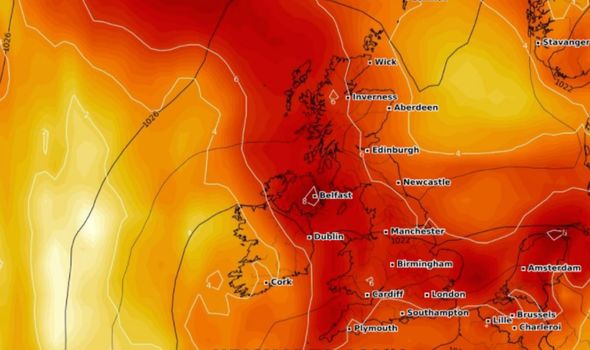 Despite the warm weather, Britons have been urged to abide by the lockdown conditions in place across the country.

Restaurants, pubs and cafes are all closed and if out of the house people must keep a distance of two metres from one another.

Parks have been asked to remain open, to give spaces for walking, exercising in this stressful time.

Of Friday’s weather, Met Office meteorologist Craig Snell said: “For many of us tomorrow it’s another dry and sunny day with highs of 24C.

“On Saturday, another largely dry day, but on the eastern coast and in the south-west of England and Wales we may see some cloud. This could trigger the odd shower, but they are expected to be brief.”

On Saturday, temperatures will again be warm, with a maximum of 22 or 23C for most of the country.

Sunday could feel cooler for many, with showers and grey skies on the way.

Mr Snell said: “Sunday will be the day it changes, temperatures will be slowly falling away from that point. 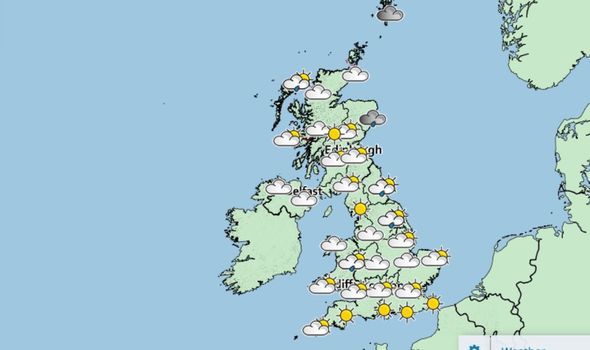 “We will see a band of showers working their way from Scotland to England during the day.

“London and the south-west won’t see showers until the evening.

“The further north you are, the sooner you’ll see showers. Northern England and Wales will have rain from about lunchtime.

“For some, this is the first spot of rain for a while. As the showers come, the temperatures will tumble.”

Most places dry with clear spells and a few mist patches developing in rural areas.

More in the way of low cloud and patchy fog in the far north and developing across eastern parts of Scotland and England.

Fog and low cloud clearing, but patches may persist near some North Sea coasts.

Else, variable cloud and sunny spells, just a small chance of a shower in the south-west.

Outlook for Saturday to Monday

Showers developing for many areas Sunday and Monday, although still some dry and bright periods.

Warm in the south, becoming cooler in the north.