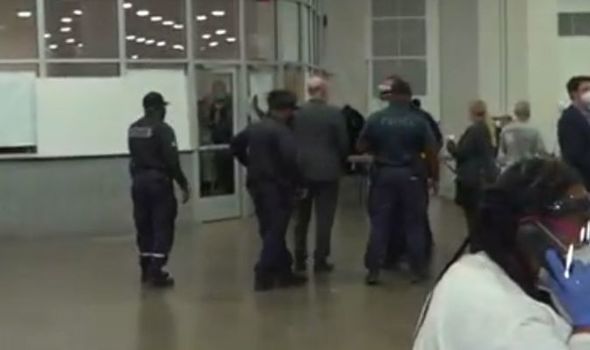 Large groups of people have been chanting and banging on the windows of the counting poll house in Michigan after being escorted out. This comes as Donald Trump’s campaign have filed a lawsuit in the US state calling for the counting to be halted until what they deem to be full access is allowed to observe the counting.

“There has been some chanting over the last few moments and there has also been some cheering as the poll watchers have been let out by police.

“The windows have been covered up by officials because there is a group of people outside the entrance to this hall where the counting is taking place who are not allowed in.

“They are pretty upset about it. It is very heated out there and some of them are banging on the windows.

“They are now covering up those windows so they can’t be seen either.

“Now there are complaints these poll watchers want to come in and observe the counting to be assured that everything is happening properly.”