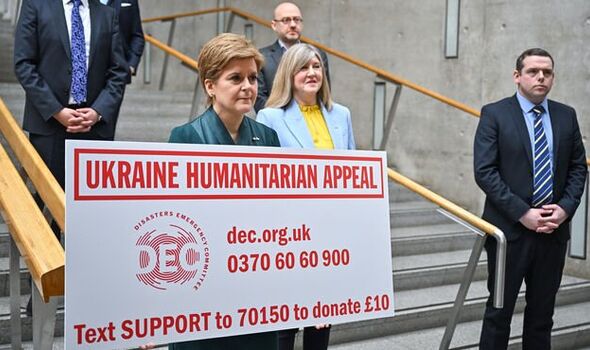 The money generously donated by British people is being put to immediate use to save lives. Charities like Christian Aid are supporting partner organisations to distribute food supplies and other essentials to people on the Ukrainian border.

The vast scale of this humanitarian disaster with more than two million refugees on the move, mainly women and children, has presented us with an enormous challenge. Add to that, having to deliver aid into a hot war zone in freezing temperatures. As people will have seen on their screens, roads are often blocked with debris from artillery and missile explosions making communications very difficult.

Right now, our priority is to work with our local partner on the ground. Because Hungarian Inter Church Aid (HIA) knows the territory and the people, that’s the most effective and safest way of getting help to the people who need it most.

So far HIA has sent canned food, flour, sugar, oil, rice, pasta, biscuits, long-life milk, tea and hygiene products to Transcarpathia in Ukraine. It has also scaled up a field office in Beregovo to support tens of thousands of refugees arriving in the border area, waiting to enter Hungary. Tents, mobile toilets and blankets have been provided for people waiting in lines that are miles long.

One of the many people they have helped is Jacob, a Nigerian national from Kharkiv. It’s Ukraine’s second-biggest city and has been relentlessly attacked by Russian forces. When HIA met him, he was hugging his crying wife, Christina, a Ukrainian national, and comforting his one-year-old baby. Their child became sick during the 48-hour trip as they fled more than 600 miles from the besieged East Ukrainian city to the Hungarian border and asked for medical help.

Jacob, Christina and their baby are just one family among thousands suffering in this terrible war that UK charities are helping. The most immediate way to bring this suffering to an end is for Russia to withdraw its troops and agree a ceasefire. Both sides must commit to protecting civilians and key services.

If the war continues some projections say more than 7.5 million Ukrainians will be forced from their homes. While we can only hope that never happens, we must be ready for that possibility.

That’s why we’re asking the readers of the Sunday Express to continue donating to the Disasters Emergency Committee appeal if you can. In the short term, £20 can provide emergency food for one person for one month.

Longer-term, once peace is established, the money being donated will help Ukrainians rebuild their shattered lives over the coming months and years. The damage done already is staggering: homes, schools, hospitals, roads, power, water supplies will all need to be fixed. You can make a practical difference by giving to the Disasters Emergency Committee appeal, of which we’re a part.

Christian Aid was founded in 1945 by British and Irish churches, initially to help refugees in Europe after the Second World War. Nearly 80 years later, with your help, we can work along with other members of the Disasters Emergency Committee to do the same for the people of Ukraine.