Home » World News » Move Over, Ricotta. This Pasta Gets Its Creaminess From Cottage Cheese.

Long before my ancestors ever met macaroni and cheese or a plate of spaghetti, noodles with cottage cheese was the pasta comfort food in my Brooklyn Ashkenazi Jewish family.

Called “lokshen mit kaese” in Yiddish, it’s an Eastern European dish of homemade egg noodles tossed with butter or sour cream and some kind of curdy white cheese. There are versions topped with fried onions and loads of black pepper; others sprinkled with cinnamon and sugar.

In “The Book of Jewish Food,” Claudia Roden explains that noodles came to German Jews from Italy in the Middle Ages, via trade and rabbinical connections. Making homemade noodles for the Sabbath chicken soup, she writes, was “a cornerstone of feminine dexterity.”

My grandmother Lily, not a paragon of culinary dexterity, bought her egg noodles at Waldbaum’s. Her lokshen mit kaese was like an unbaked kugel, the hot noodles and cheese tossed with raisins, cinnamon and melted butter. Usually she preferred farmer cheese, which is dry and crumbly like feta. But I liked it best with creamy, tangy cottage cheese, which she stocked up on whenever Waldbaum’s had a sale. 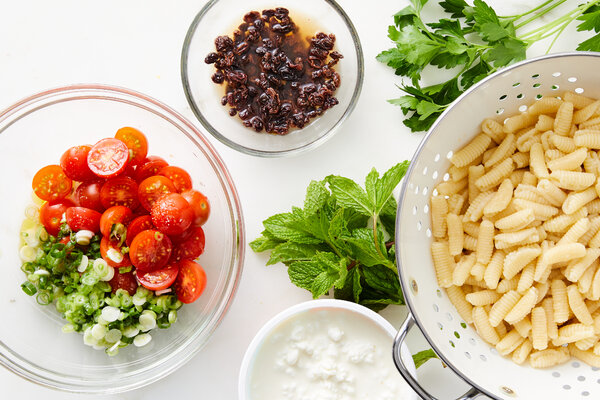 That such a dessertlike dish could be eaten for lunch and not after was a wonder of my grandmother’s kitchen, and about a million times better than her tuna salad with the sweet pickle relish on rye.

It took a pandemic for me to start craving the nursery comfort of noodles with cottage cheese again. For the first few months, I made it exactly as my grandmother did.

After a while I started experimenting, leaning into the dish’s savory side by adding the fried onions and black pepper I’d read about. It was wonderful, but the onions were time-consuming and messy. To me, part of the appeal of noodles with cottage cheese is its one-bowl simplicity.

This version splits the difference between ease of preparation and complex, savory flavors. Instead of fried onions, I tossed in slivers of sharp raw scallion to contrast with the richness of the cottage cheese. Currants — smaller and more intense — replace the raisins. And some halved cherry tomatoes and mint make it juicy, fresh and perfect for summer.

When all was said and done, my grandmother might not have recognized this as a riff on her beloved lokshen mit kaese. But that wouldn’t have stopped her from gobbling it all up.