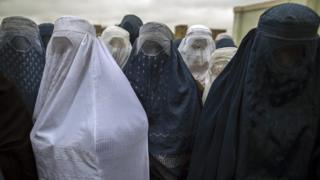 A woman from western Afghanistan – we will call her Rabia – was suffering from severe fever, so she went to see a doctor. The doctor’s diagnosis was Covid-19.

Rabia returned home, suffering from pain and fever, and gave her prescription to her husband to buy the medicine for her. But when he saw her name on the prescription he beat her, for revealing it “to a strange man”.

Her story – which was relayed to the BBC through a friend – is not unique. In Afghanistan, family members often force women to keep their name a secret from people outside the family, even doctors.

Using a woman’s name in public is frowned upon and can be considered an insult. Many Afghan men are reluctant to say the names of their sisters, wives or mothers in public. Women are generally only referred to as the mother, daughter or sister of the eldest male in their family, and Afghan law dictates that only the father’s name should be recorded on a birth certificate.

But some Afghan women are now campaigning to use their names freely, with the slogan “Where Is My Name?” The campaign began three years ago when Laleh Osmany realised she was fed up with women being denied what she thought was a “basic right”.

“The campaign is getting one step closer to achieving its goal of persuading the Afghan government to record the mother’s name on a birth certificate,” Ms Osmany, who is 28, said.

The campaign appears to have taken a big step in the past few weeks. A source close to the Afghan president Ashraf Ghani said the president had instructed the Afghanistan Central Civil Registration Authority (Accra) to look into the possibility of amending the country’s Population Registration Act to allow women to have their names on their ID cards and childrens’ birth certificates.

The BBC understands the act has now been amended and forwarded to the President’s Office of Administrative Affairs (OAA).

Fawzia Koofi, an Afghan former MP and women’s rights activist, told the BBC she welcomed the development, which “should have happened many years back”.

“The matter of including a woman’s name on the national ID card in Afghanistan is not a matter of women’s rights – it’s a legal right, a human right,” she said. “Any individual who exists in this world has to have an identity.”

But campaigners fear that their efforts may face strong opposition from conservative members of the Parliament, some of whom have already expressed their disapproval. Ms Osmay welcomed the reports of the president’s amendment order, but said it was not the end of the fight.

“Even if the parliament passes the law and President Ghani issues a presidential decree endorsing the inclusion of mother’s name on ID cards, we will keep fighting until shame is removed from women’s names,” she said.

Soon after Ms Osmany began her campaign three years ago, Afghan celebrities began to throw their support behind it, including the singer and music producer Farhad Darya and the singer-songwriter Aryana Sayeed.

“When we refer to women by their roles, their original and real identity gets lost,” said Mr Darya. “When men deny women’s identities, over time women themselves begin to censor their own identity.”

Ms Sayeed, a women’s rights activist and one of Afghanistan’s most famous singers, said women were entitled to an independent identity.

“A woman is first of all a human and then your wife, sister, mother or daughter, and she has the right to be recognised by her identity,” she said. But she said she feared the campaign had a long road ahead.

Along with the support, Ms Osmany has received many critical comments on social media. Some said the priority should be to maintain the peace within the family – “Get your priorities right,” wrote one commenter. Several men accused her of wanting her name on her children’s identity cards because she didn’t know who the father was.

And many woman in the country would not support the idea. “When someone asks me to tell them my name, I have to think about the honour of my brother, my father and my fiancé,” said one woman from Herat province, who spoke to the BBC anonymously.

‘The sun and the moon haven’t seen her’

Afghanistan remains a patriarchal society, in which “male honour” forces women not only to keep their bodies hidden but also to hide their names, according to the Afghan sociologist Ali Kaveh.

“In Afghan society, the best women are those who are not seen and heard. As the saying goes: ‘The sun and moon haven’t seen her’,” Mr Kaveh said.

“The harshest and toughest men are the most respected and honourable men in society. If the female members of their family are liberal, they are considered promiscuous and dishonourable.”

Shakardokht Jafari, an Afghan medical physicist based at the Surrey Technology Centre in the UK, said that for Afghan women to have an independent identity, they would need financial, social, and emotional independence, and support from the country’s parliament.

“In a country like Afghanistan, the government should take legal action against those who deny these women their identity,” Ms Jafari said.

Since the fall of the Taliban regime nearly two decades ago, the national and international communities have been trying to bring women back into public life. But women like Rabia are still abused by their husbands for telling doctors their names, and it can be risky to speak publicly against the tradition.

It is easier for women who have left Afghanistan. Farida Sadaat was a child bride and had her first baby at the age of 15. She and her husband later separated and she moved to Germany with her four children.

Ms Sadaat told the BBC her husband had not been present in his children’s lives, physically or emotionally, and she believes he has no right to have his name printed on their Afghan identity cards.

“I brought up my children all by myself. My husband refused to divorce me so that I cannot get married again,” she said. “I call upon the Afghan president to change the law and record mothers’ names on birth certificates and identity cards.”

Sahar, an Afghan refugee in Sweden, who used to be a freelance journalist but now works in a nursing home, told the BBC she had been a distant but staunch supporter of the campaign since it began. When Sahar first heard about the idea, she decided to post a message on social media.