At least 38 anti-coup protesters have been killed in Myanmar, according to a local advocacy group, making for one of the bloodiest days since the demonstrations began.

Violence has erupted across the country since 1 February, when a military junta seized control from the democratically elected leader Aung San Suu Kyi.

In addition to the 38 protesters who died on Sunday, one police officer was also killed, local media reported. The Assistance Association for Political Prisoners (AAPP) said that 22 anti-coup demonstrators died in the Hlaingthaya region of Myanmar’s main city Yangon after factories funded by China were set on fire.

China is seen as being supportive of the junta that took control of the country last month.

Another 16 protesters were killed elsewhere, and the police officer died after a confrontation with protesters. They are the second officer to die during the demonstrations.

It comes after Sky News heard members of the police were fleeing to India after defying orders to shoot civilians.

As smoke rose from the Hlaingthaya region, security forces fired upon protesters in the suburb which is home to migrants from across Myanmar, according to local media.

One photojournalist who witnessed the events told Reuters: “It was horrible. People were shot before my eyes. It will never leave my memory.”

State media announced the imposition of martial law on Hlaingthaya and another part of Yangon after the incident. 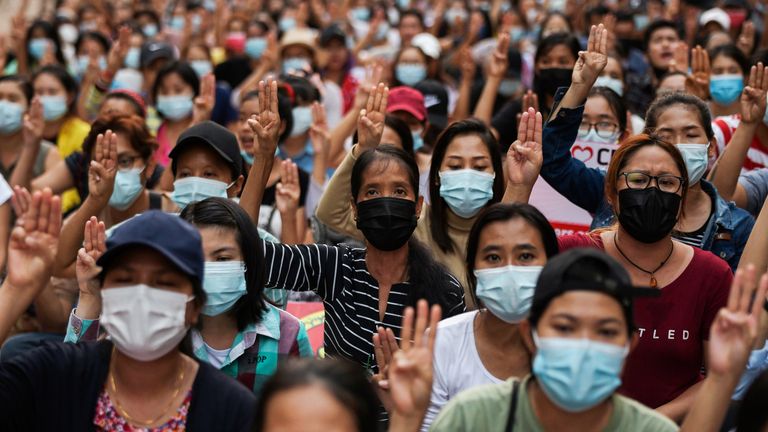 Dr Sasa, a representative of the elected lawmakers who were ousted on 1 February, said: “The perpetrators, attackers, enemies of the people of Myanmar, the evil State Administrative Council (junta government), will be held accountable for every drop of blood that shed.”

In a broadcast, the military-run Myawadday television network said that security forces had acted after four clothes factories and a fertiliser plant were set on fire, and a group of 2,000 people stopped fire engines from reaching them.

China’s embassy released a statement after the fires at its factories, saying many staff were injured and trapped.

It said: “China urges Myanmar to take further effective measures to stop all acts of violence, punish the perpetrators in accordance with the law and ensure the safety of life and property of Chinese companies and personnel in Myanmar.”

British ambassador Dan Chugg said: “We call for an immediate cessation of this violence and for the military regime to hand back power to those democratically elected by the people of Myanmar.” 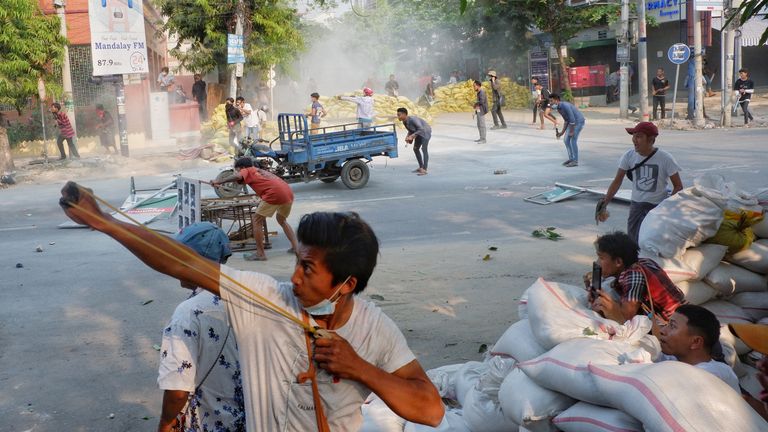 According to the AAPP, 126 people have died in the protests in total, and 2,150 people were arrested as of Saturday, with 300 since released.

The army took power after claiming that last year’s elections were fraudulent.

The junta has said it will hold a new election but has not set a date.