The new war over Nagorno-Karabakh is a conventional one, being fought by professional armed forces.

But this time, hi-tech 21st-century weaponry has the capacity to make this decades-old conflict more destructive than ever before.

If official battlefield statistics are to be believed, the death toll is staggering. Azerbaijan has yet to confirm the number of its war dead.

But Armenia claimed to have killed or wounded 5,000 Azeri personnel at the time of writing. Armenia has regularly updated its military body count, which so far stands at almost 500. Azerbaijan has estimated the real number is many times higher.

Claims about territorial gains and losses inflicted on each side have proven difficult to verify. Not only have media teams limited access to the front-line fighting, but aerial bombardment of civilian areas has also made their work extremely hazardous.

At least six journalists have been injured.

But battlefield videos and the known military capabilities of the two warring sides suggest Azerbaijan has the technological advantage, especially with its combat drones purchased from Israel and Turkey.

Some carry their own missiles. Others are guided “kamikaze” bombs.

Whether they have the destructive power to prove a decisive factor in the current conflict has yet to be proven.

Digital billboards in Baku have broadcast high-resolution imagery of missiles striking Armenian tanks and other military hardware, as well as groups of soldiers caught in the open.

“These drones show Turkey’s strength. It also empowers us,” he said. 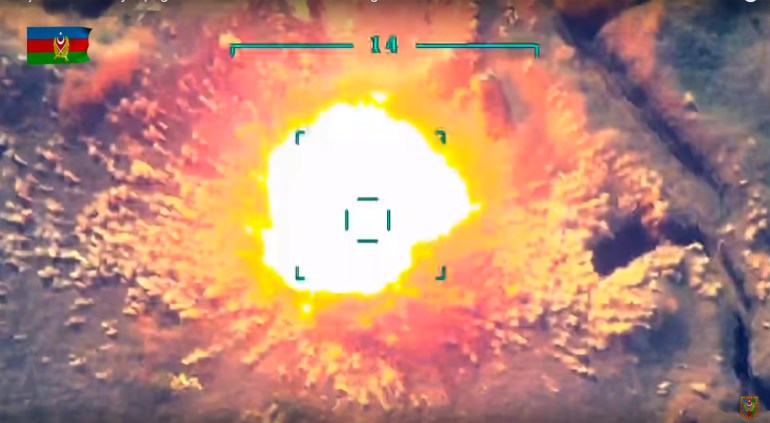 The Bayraktar TB2 can operate at an altitude of 8,000 metres (about 26,250 feet) which makes it difficult to detect, and can fly for up to 27 hours, with a payload of four missiles.

“We have seen Bayraktar drones actively used in Syria and Libya by the Turkish air force against [Syrian President Bashar] al-Assad and General [Khalifa] Haftar’s Army [in Libya],” said Fuad Shahbaz a defence analyst at the Centre for Strategic Communications in Baku.

“Now, they have appeared in Azerbaijan very recently and are being actively used in Nagorno-Karabakh against the separatist regime.”

Rob Lee, a PhD candidate at University College London, said that the use of TB2s has dramatically affected Armenian forces on the ground and their ability to reinforce and defend themselves.

“TB2s initially targeted air defence systems. The ones we’ve seen destroyed are from the 1980s. I think the radars are struggling to pick up these small UAVs.

“Then, the TB2s started going after tanks, artillery and now, because they’ve been going through a succession of targets of priority, we see them targeting squads of soldiers.” 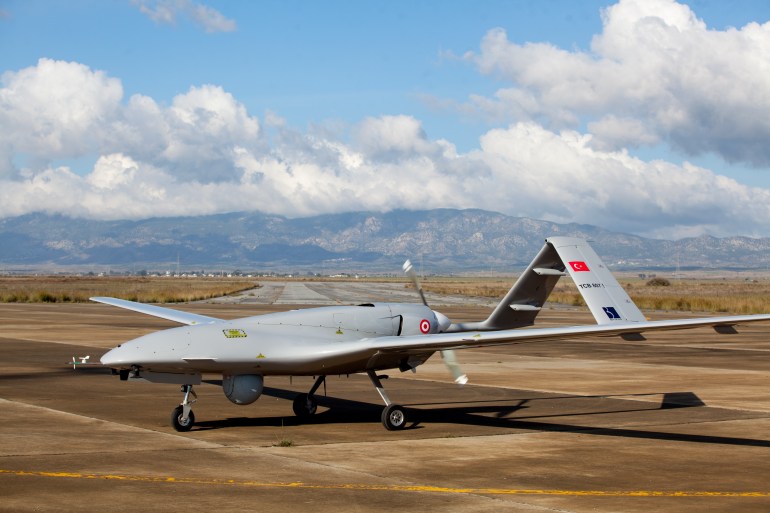 “Russia realised after 2016 that they had to start equipping Armenia with what they’d been selling Azerbaijan to rebalance the power dynamic,” said Lee.

That includes the Iskander M, a tactical ballistic missile system which has accuracy to within 10 metres (33 feet), a range of up to 500km (311 miles) and is highly effective at avoiding air defences.

So far, it has not been used. 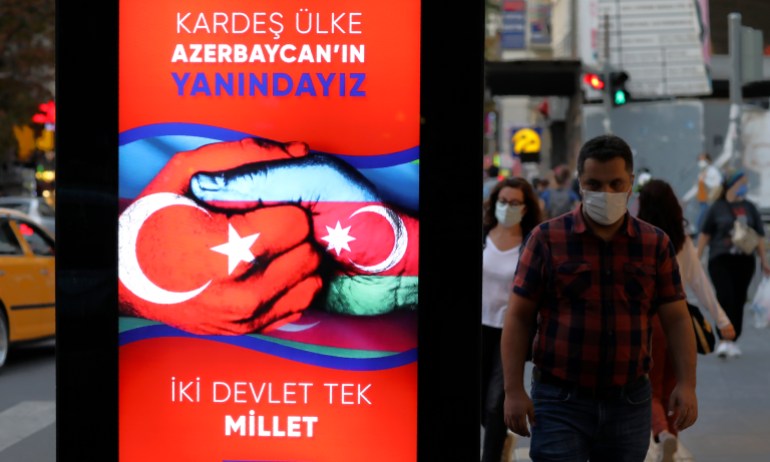 People wearing masks to help protect against the spread of coronavirus, walk past a billboard in support of Azerbaijan in its war with Armenia over the region of Nagorno-Karabakh, in Ankara, Turkey [Burhan Ozbilici/AP]But Shahbaz said Armenian forces ultimately have to contend with Azerbaijan’s numerical supremacy.

“The separatist regime is well informed about a country with a population of 10 million people, 70,000 active military personnel and a 300,000 strong reserve army. So, they cannot resist for long.”

If Armenian forces in Nagorno Karabakh are numerically and technologically outgunned, they do have one important advantage: geography.

Richard Giragosian from the Yerevan-based Regional Studies Center believed Azerbaijan may have already paid a price in terms of military equipment and personnel.

“The Azeri offensive was so sweeping in its scale across the broad line of contact that its initial force deployment was scattered and over-extended logistically making them more vulnerable to counterattack.” 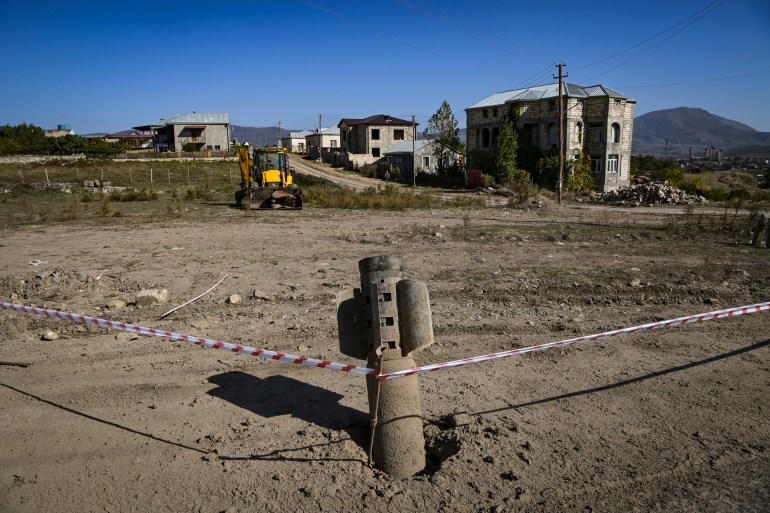 An unexploded BM-30 Smerch missile is seen on the outskirts of Stepanakert, a main city in Nagorno-Karabakh, on October 12, 2020 [Aris Messinis/AFP]Since occupying Nagorno-Karabakh and surrounding Azeri territories before the 1994 ceasefire, Armenian forces have had years to prepare their defences.

“You have preplanned targets, exact coordinates and grids,” said Lee. “They know how to dial in so that the first mortar or artillery round they fire will be right on target.”

Karabakh forces are also likely to have fortified secondary positions stocked with weapons that they can fall back on.

“Even when you have these small gains Azerbaijan has, it’s hard to exploit them. Often in a war, when you break through a line, you can exploit that weakness and retake a lot of territory. But in Karabakh, it’s hard because there are only a couple of roads. If you take out the first vehicle the others can’t get around them.”

But for now the status quo seems to be in Azerbaijan’s favour, said Lee.

“TB2s are just sitting overhead and waiting for targets of opportunity. Ultimately, Armenians don’t have a good plan for destroying them. They have to do something or Azerbaijan will keep hitting them.”

The Republic of Armenia, which supplies forces in Karabakh with weaponry and conscripts, does possess a limited number of modern Russian “Pantsir” air defences that are capable of finding and shooting down TB2s. 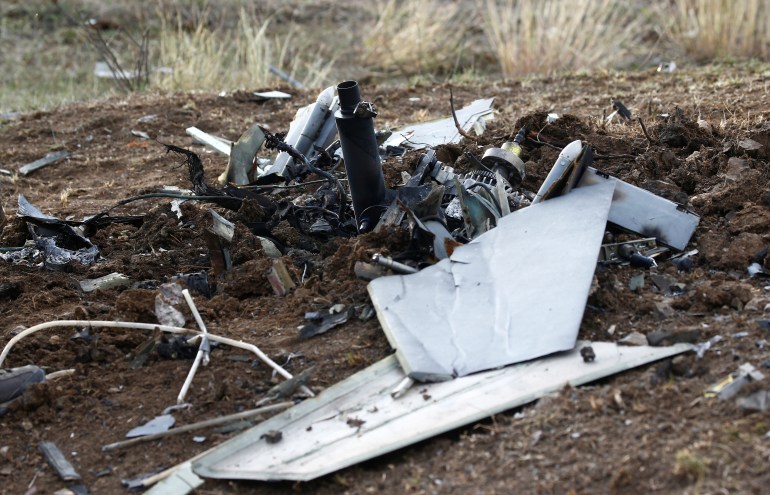 The remains of an unmanned aerial vehicle are pictured on the outskirts of Stepanakert during the military conflict over the breakaway Nagorno-Karabakh region, October 11, 2020 [Stringer/Reuters]“Do they want to deploy them to Karabakh from Armenia where they will probably lose some? I’m not sure Armenia is willing to do that yet,” said Lee.

Without an effective defence against Azerbaijan’s apparent air supremacy, the TB2 attacks are likely to continue to take their toll on Armenian manpower and morale.

“You don’t know where the firing is coming from, it’s the invisible enemy,” said Giragosian.

“There’s this sci-fi movie effect. And not only military – the political use of attacks on civilian populations, infrastructure, and the use of cluster bombs as documented by Amnesty International undermines the morale of political leaders. It is psychological warfare attacking the will to fight.” 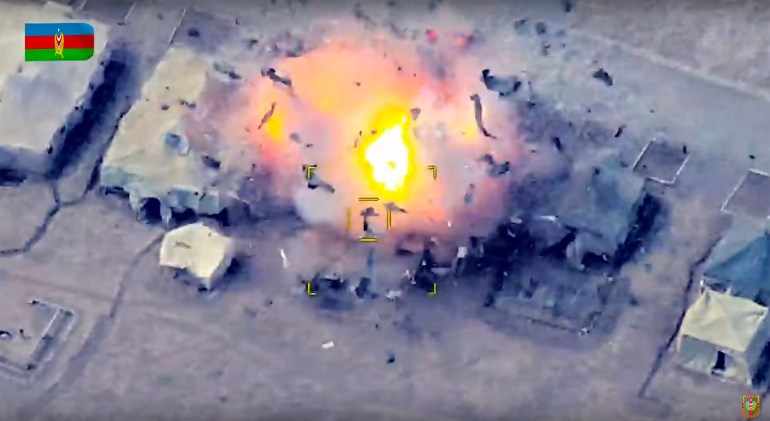 “The Azeri military isn’t generally viewed as being very capable, with promotions based on political connections. Even if the Azeris are using hi-tech stuff, Armenians can still defeat them if their tactics and techniques are not employed correctly.” 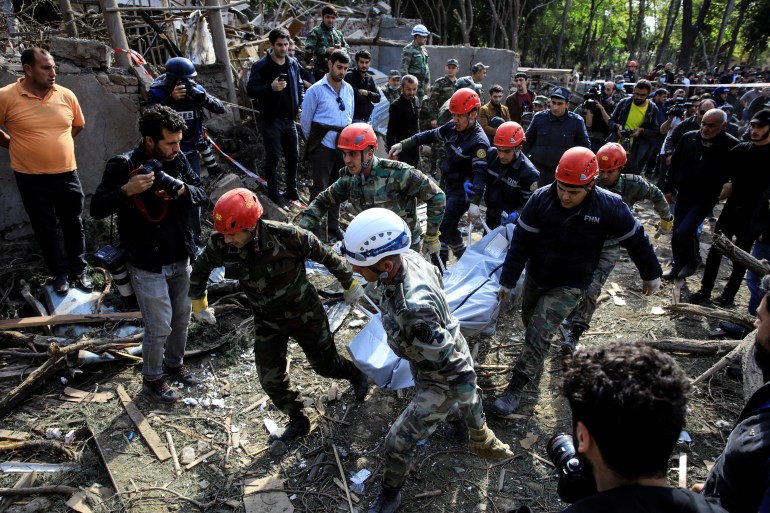 Search and rescue teams carry the body of a victim away from the blast site hit by a rocket during the fighting over the breakaway region of Nagorno-Karabakh in the city of Ganja, Azerbaijan October 11, 2020 [Umit Bektas/Reuters]Both sides have resorted to trading missiles and rockets across the line of contact and deep into civilian towns and villages, increasing the numbers of civilian casualties.

But there may now be signs of a scaling back in fighting coinciding with the recent humanitarian ceasefire agreed in Moscow and the expected onset of winter.

“We need Azerbaijan to reach a point where they are satisfied they have enough territory and we need Turkey to stop pressuring Aliyev to keep going,” said Giragosian. “Russia has been notable in its uncharacteristic absence and passivity. The real burden is on Azerbaijan to make a calculation. Do they keep fighting, secure even more territory or mitigate the risk and stop now?”

The high-resolution footage TB2s have captured of tanks, armoured vehicles, artillery and soldiers eliminated by precision drone strikes may already have provided Azerbaijan with the perception of victory it needs.

“Even if you aren’t succeeding on the battlefield, you can still show strikes, show this to your people and to the international community and say, ‘Look: we have a capable military, don’t mess with us’,” said Lee.

“No one considers that this war can be prolonged for several months and probably Azerbaijan seeks to ‘liberate’ as much as it can from the separatist regime to restart peace negotiations,” said Fuad Shahbaz.

For now, however, the words of Azerbaijan’s president offer the clearest indication of the country’s intentions.

“They will go to Khankendi (Stepanakert) and reoccupy the whole territory. This is the official statement of the President. Jabrayil district was taken back. So it’s pretty much possible that Azerbaijan can retake control of Khankendi and change the situation rapidly in favour of itself. Azerbaijan has the resources for that, financially and technically. They still have significant resources.”