North Korea has reacted furiously to the US president’s description of the country as a security threat, calling it a “big blunder”.

The response came after Joe Biden addressed Congress for the first time last week, saying nuclear programmes in North Korea and Iran are a “serious threat to America’s security and world security”.

He promised to work with allies to address the problems through “diplomacy and stern deterrence”.

But Kwon Jong Gun, a senior North Korean Foreign Ministry official, was unimpressed, saying talk of diplomacy was being used to cover up US hostile acts.

In a statement reported by news agency KCNA, he said: “(Mr Biden’s) statement clearly reflects his intent to keep enforcing the hostile policy toward the DPRK as it had been done by the US for over half a century.

“It is certain that the US chief executive made a big blunder in the light of the present-day viewpoint.

“Now that the keynote of the US new DPRK policy has become clear, we will be compelled to press for corresponding measures, and with time the US will find itself in a very grave situation.”

Mr Kwon was not specific about the steps North Korea could take. 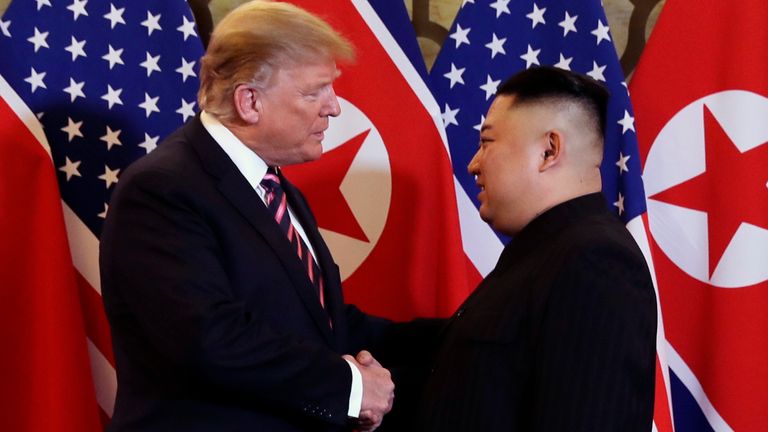 Another unnamed foreign ministry spokesperson said the US had insulted the dignity of North Korea’s leadership by criticising the country’s human rights situation.

The criticism is a provocation that shows the US is “girding itself up for an all-out showdown” with North Korea, the spokesperson said, adding that it will be answered accordingly.

On Friday the White House said that a review of US policy towards North Korea had been completed.

Press secretary Jen Psaki did not give details of the review’s findings but she said the Biden administration would seek a middle ground between Donald Trump’s “grand bargain” and Barack Obama’s “strategic patience” approaches.

Mr Trump met North Korean leader Kim Jong Un a number of times during his presidency, each time claiming to have made major progress.

But no deal was ever reached.

North Korea is reluctant to surrender the nuclear weapons it sees as necessary for its own protection – especially without some form of sanctions relief.

The US had wanted steps towards denuclearisation before committing to the easing of sanctions.

Markus Garlauskas, a senior fellow with the Atlantic Council and former US national intelligence officer for North Korea, said Pyongyang’s words are a reminder that the challenge is about more than terminology or tactics.

“The differences between the Kim regime and the United States are much more fundamental,” he said.

He added that Mr Kim does not intend to give up nuclear weapons or reform North Korea’s political system but it is difficult to see how the US could embrace a nuclear-armed North Korea that abuses human rights.