Home » World News » Paddleboarders rescued after 15 hours in the sea 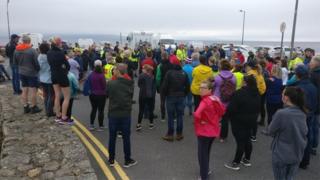 A woman and a teenage girl have been found clinging to a lobster pot off the Irish coast after going missing for almost 15 hours while paddleboarding.

Sara Feeney and her cousin Ellen Glynn are well and being treated at University Hospital Galway.

She also said paddleboards would “never darken the doors of our houses again” .

The cousins went missing after setting out from a beach at Furbo, County Galway, on Wednesday evening.

Ms Feeney said she was walking the dog on the beach when the pair went out on the paddleboards.

She said everybody was in good spirits on what was a “fabulous evening”.

However when the pair did not return, she alerted the coastguard.

A major search operation began after the alarm was raised at 22:00 local time.

An air and sea search rescue began overnight and continued until their discovery.

The Irish coastguard and local volunteers were also involved.

Despite bad weather overnight, the pair – who had life jackets, but no wetsuits – were found by the fisherman.

‘Survived by not panicking’

The fisherman who found them told Irish broadcaster RTÉ that he was prepared to go as far as was necessary to rescue them because otherwise they would have drifted further out to sea.

Patrick Oliver and his son Morgan, 18, left the docks and headed west across the bay after he heard they were missing.

Mr Oliver was able to predict where they could be, by calculating the wind speed and direction.

“They travelled there about 20 miles from the beach to the side of Inis Oírr [one of the Aran Islands],” he said.

He also said he was “delighted for their parents” and he had thought about their “poor mother on the beach all night looking out for them”.

He said the women had survived by not panicking, keeping their heads clear and by hanging on to a buoy.

“They were definitely in shock but the weather is warm so they were lucky,” he said.

He said the pair were “waving their paddles up in the air” when they spotted the fishermen.

They gave the women oilskin jackets and hats to help them warm up after they were rescued.

He said they had been “weak and tired” but were able to sit up and make a “little bit of chat”.

“They were in shock but they were thankful,” he added.

“We got them in the boat and we brought them into the island and the chopper landed there.”

Ms Feeney said the situation was “the stuff of nightmares”.

She said the family was “forever indebted” to the Olivers for rescuing the women.

She also thanked all those who took part in the search and rescue operation.

The pair had been wearing buoyancy aids and she urged people who intend to go paddleboarding to wear them.

On social media, the coastguard thanked everyone who assisted.

Barry Heskin, from the RNLI, said tears were shed and his team was “jumping around the station” when news came back that the rescue had been successful.