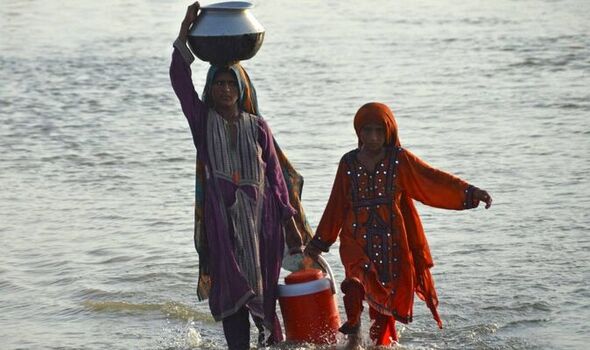 On Wednesday, officials confirmed that doctors have started treating people suffering from diarrhoea, skin infections and other waterborne ailments in the country’s flood-hit areas. Authorities said waterborne diseases among flood victims are now common across all four of Pakistan’s provinces.

The development has forced the Government to deploy additional medical teams and dispatch medicine as well as provide clean drinking water to survivors.

Dr Azra Fazal Pechuho, health minister in the country’s worst-affected province of Sindh, said officials have set up 4,210 medical camps in the province’s flood-hit areas to treat victims now suffering from skin and waterborne diseases, which are common during floods.

The warning came a day after Pakistan’s prime minister called the devastating floods “the worst in the country’s history”.

Prime minister Shehbaz Sharif said nearly one million livestock had been lost, crops were washed away, and his government was considering importing wheat to avoid any shortage of food.

He said that any inadvertent delay by the international community in helping victims “will be devastating for the people of Pakistan”.

According to initial estimates by the government, the devastation has caused $10m (£8.5m) of damage to the economy, however, the planning minister, Ahsan Iqbal, said this was a preliminary estimate and that the actual cost will be “far greater”.

Last week, the UN allocated $3m (£2.5m) for aid agencies and their partners to respond to the floods, with the money used for health, nutrition, food security, water, and sanitation services.

UN Secretary-General Antonio Guterres said in a video message for the launch of the appeal, said: “Pakistan is awash in suffering.

“The Pakistani people are facing a monsoon on steroids… people’s hopes and dreams have washed away.”

While monsoons are common at this time of year in the region, they hit earlier than usual in Pakistan, according to officials.

“This year, Pakistan has received the highest rainfall in at least three decades.

“So far this year the rain is running at more than 780 percent above average levels.

“Extreme weather patterns are turning more frequent in the region, and Pakistan is not an exception.”