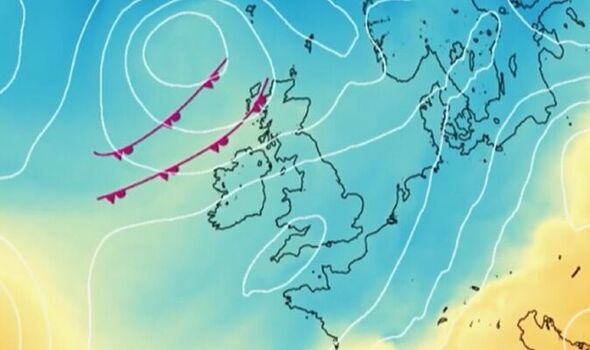 Frozen Britain is strapped in for a ‘roller-coaster’ run up to Christmas as battling weather systems unleash wind, rain, hail, frost and more heavy snow. The bone-numbing windchill will tighten its grip mid-week as a cold front from the north flings opens the doors to a surge of Arctic air.

Swathes of Britain remain blanketed in snow after heavy downpours at the start ot eh week while storms in southern England triggered eruptions of ‘thundersnow’.

A brief mild spell this weekend will make way for another Polar Plunge in the run up to the big day as ‘winter bites back’.

Jim Dale, meteorologist for British Weather Services, said: “In the run up to Christmas it looks like we might be on a bit of a roller-coaster.

“If the Atlantic gets a chance to influence the weather, then we will see low pressure after low pressure, and this will make things more unsettled.

“On the back of that, returning polar maritime air, which is air travelling across the Atlantic from the North Pole, will bring the potential for snow.

“Somewhere will get a White Christmas, and the most likely spots are going to be to the north of Britain, but we are still a week and a bit off and it is too early to say for certain.”

Shivering Britons are promised a brief spell of milder weather during the festive run-up before temperatures plunge through the end of the year.

Mr Dale, author of Weather Or Not? said: “There is a chance it will turn milder in the week before Christmas, but the north-westerlies will not be far behind.

“This means we will be back in the firing line for rain and potentially snow, sleet, ice, hail and freezing fog as the cold returns with a wintry bite-back.”

As temperatures plummet, government forecasters have extended severe weather warnings in parts of the country.

Alerts for snow and ice are in force across northern Scotland through the week while ice and fog warnings have been issued across Northern Ireland and southeast England.

Met Office meteorologist Alex Deakin said: “It will be another wintry week of weather.

“There are signs of things turning a bit milder as we go into next week but for this week it is mostly about the cold, the frost, and the ice, and in places, a little bit of snow.

“There is a cold front that pushes its way southwards and reintroduces those northerly winds through the middle part of the week and that will accentuate the cold feel.”

As hopes grow for a festive whiteout, meteorologists warn it is still too early to pin-point where Christmas snow will fall.

But with the big freeze tightening its grip on Britain, bookies have slashed the odds on a White Christmas, with Coral offering 1-3 from 4-5 on festive snow.

Spokesman John Hill said: “We are less than two weeks away from Christmas Day now and with heavy snowfall over the weekend in some parts of the UK, the prospects of a White Christmas are increasing all the time.

Britons feeling the winter bite have been promised a brief respite this weekend, although experts warn not to ditch the thermals.

Northerly winds in the run up to Christmas threaten another blast of Arctic misery over the festive period.

Exacta Weather forecaster James Madden said: “There are some indications for a mild spell later this week, however these seem a little overcooked, and at best we can only expect a moderate rise in temperatures.

“However, we should not be surprised to see the cold make a big fight back during Christmas week with a sharp return to cold conditions and the risk of widespread wintry conditions.”

The Met Office’s Alex Deakin added: “The UK is surrounded by areas of low pressure, but most of those lows stick to the south of the country.

“These lows flirt with the south and that’s where the mild air is but it never really gets in and we stay in the blue, until the weekend.

“But these weather features may start to mix things up a little bit on Friday and that may potentially open the door to milder air that is waiting in the wings down to the southwest as we go through the weekend and into the start of next week.”