Francis was forced to cancel three events at short notice over the weekend, after his ongoing issues with sciatica struck the 84-year-old again. Matteo Bruni, a spokesperson for the Vatican, confirmed that due to the return of his condition he would not deliver Mass on Sunday, as well as attend a meeting with diplomatic corps on Monday, which has now been rearranged. This is the latest in a string of cancelled appointments he has made due to the condition, which affects the back and legs, after he skipped New Year’s Day Mass.

His health has become a concern for insiders, including Vatican author Lynda Telford, who said she was fearful for the future of the church if Francis stood down.

And the writer told Express.co.uk that the Vatican “will go under” if someone similar to Francis’ predecessor, Benedict, took over.

Ms Telford argues that Benedict’s traditionalist views “put off” those with a more modern mindset who could be tempted to join the Catholic church.

Francis has been widely praised for installing a liberal agenda within the Vatican. 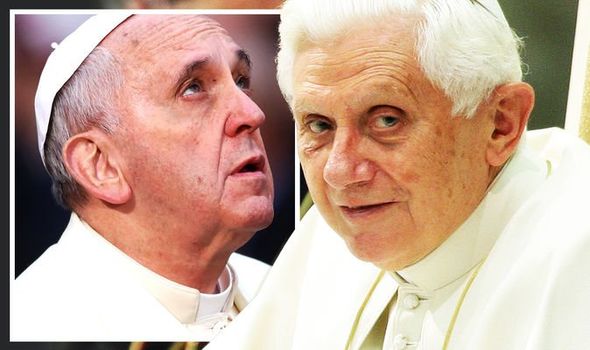 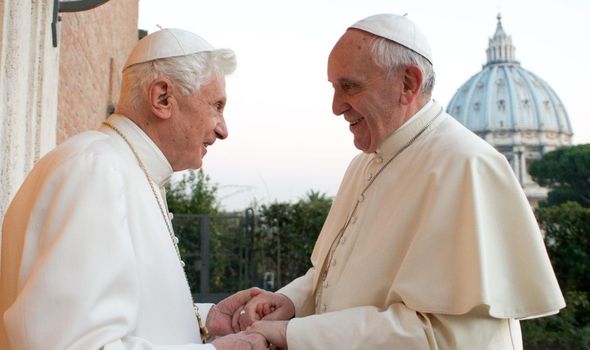 This was epitomised by his decision to give women greater powers within the church this month.

Yet, should a Benedict-type enter the Vatican next, the work carried out by Francis could be ruined, Ms Telford suggests.

She said Benedict and his supporters would be “terrified” by some of Francis’ choices while Pope, adding: “They really would not like the idea at all [of women in the church], but Francis is aware that things have to change otherwise the church will go under.”

Benedict was described by Ms Telford, author of Women in the Vatican – Female Power in a Male World, as “an opponent of change” and since he stood down in 2013 he had been creating “difficulties” for Francis. 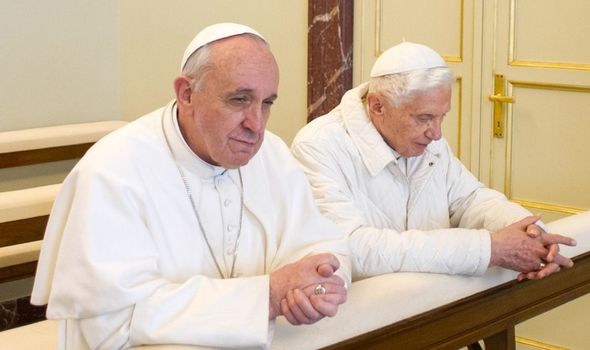 The writer said: “He is a very strong traditionalist and in the Vatican there are far too many of them, these backward-looking traditionalists who don’t want any kind of change.

“I think of course it is all leading to the fact that if you free women of contraception, with a marriage to a priest even, you’re leading inevitably to the female priesthood or at least a part-female priesthood, which is a terrifying thought for most people who are in the higher echelons of the church right now.”

She added: “At a time when I think the church needs to change, it is losing the faithful in many countries now, it needs desperately to change and accept the differences in the change of position of women throughout the world.

“I’m sure Pope Francis is aware of this and he’s also extremely popular with the people.” 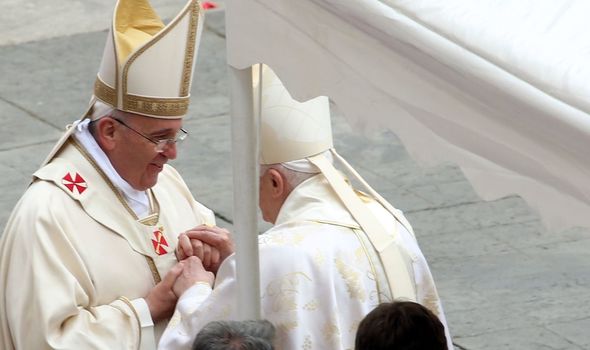 Reports have continually circulated regarding a feud between Francis and Benedict, ever since the latter stood down to become the first living Pope since the 1400s to do so.

Since his departure, Benedict has remained in the Vatican, with many observers claiming he still exercises his traditionalist values, which contradict the liberal agenda Francis is attempting to create.

Last year, Benedict made the highly controversial move to defend priestly celibacy within the church, at a time when Francis was considering a move to ease the ban on married men serving as priests.

In a piece co-authored with Cardinal Robert Sarah, the 93-year-old said “he could not remain silent on the issue”, arguing the tradition has “great significance” as it ensures the priests focus on their religious duties. 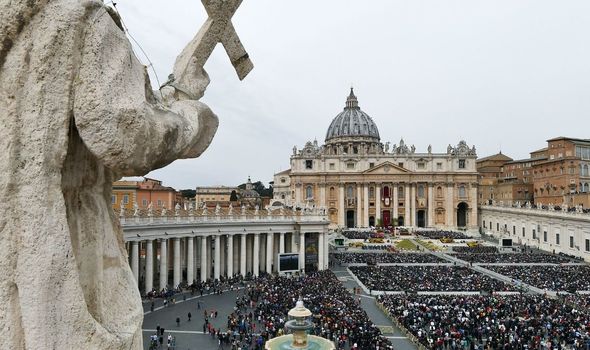 He claimed that “it doesn’t seem possible to realise both vocations [priesthood and marriage] simultaneously”.

It sparked outrage among experts on Catholicism, including Joshua McElwee, a journalist for the National Catholic Reporter, describing the moment as “incredible… a former Pope speaking in public about something his successor is currently in the process of considering”.

His thoughts were shared by Martin Bashir, the BBC’s religion editor, who said Benedict had made a “strategically timed appeal to Pope Francis to refrain from changing the rules on celibacy”.

He added it was a “collision” of the traditionalists and liberals, and that the “demands of a modern church that is growing” needed to change its tactics.