Dozens of world leaders in religious and political organisations have moved to condemn Turkish president Recep Tayyip Erdogan following his decision to make the change it initially made in 1934, and return the premises back into a mosque. Alongside Pope Francis, the likes of the World Council of Churches, and the Church in Russia also demanded Turkey’s courts change its decision. The controversy lies within the building itself, which began life as a Christian cathedral some 1,500 years ago, before being turned into a mosque following the Ottoman conquest of 1453.

But in the mid-1930s, the site became a museum, and subsequently a Unesco World Heritage Site, something Turkish courts claim was wrong to do as it is “not possibly legal” to be anything other than a mosque.

Many have claimed President Erdogan’s decision to make the change was politically charged as he used it to distract from a number of controversies surrounding him, including his management of the economy, handling of the coronavirus pandemic and controversial legislation he passed surrounding the nation’s judicial system.

Others say this represents the Turkish leader’s goal of reasserting the country’s Muslim identity, as opposed to its current secular nationalism of Mustafa Kemal Ataturk, who is deemed by many to be Turkey’s modern founder.

And Pope Francis joined the calls by expressing his “pain” at Turkey’s decision, by admitting his “thoughts go to Istanbul” during a service at the Vatican over the weekend. 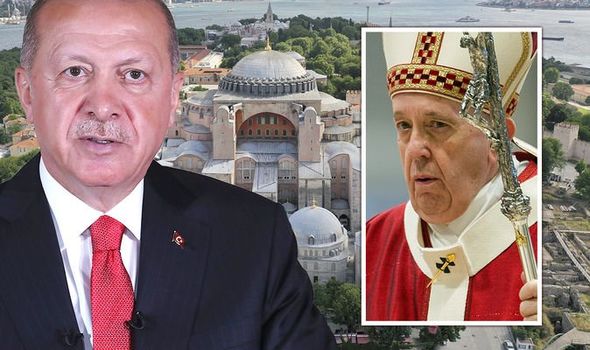 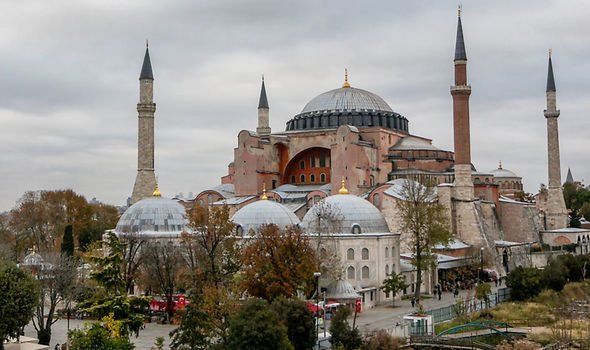 Author Lynda Telford, who penned ‘Women of the Vatican – Female Power in a Male World’, felt Francis needed to go further and use his position to urge Turkey to make a dramatic U-turn.

She said: “I’d personally love him to stand out against it, but he is constrained by others.

“I doubt they’ll let him interfere, but someone needs to be brave enough to point out that the Hagia Sophia is not just ‘theirs’ and that it was a Christian church (albeit Eastern) before their religion was invented.”

In Turkey, Islamists have been calling for the mosque to be reinstated, while secular opponents are vehemently against such a move.

After the announcement was made, President Erdogan revealed the first Muslim prayers would take place at the Hagia Sofia, in Istanbul, on July 24. 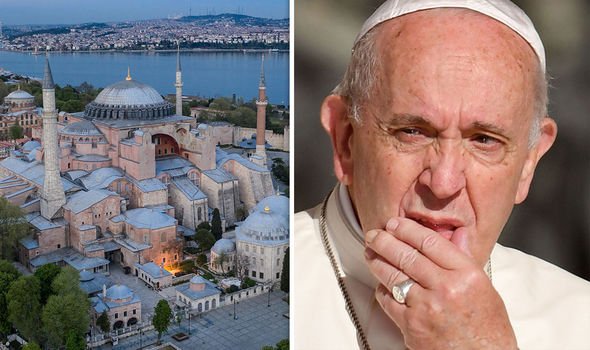 While nations such as Iran welcomed the news, the backlash has been fierce in some quarters, with the likes of Greece and other EU member states claiming intervention was needed.

Unesco also advised that it would be reviewing the status of the monument, which attracts around 3.7million visitors a year, at a World Heritage Committee meeting.

According to the BBC, Orhan Pamuk – one of the most famous authors of Turkey – also blasted the decision by claiming the “pride” some in the nation felt at being a secular Muslim nation would be lost.

He added: “There are millions of secular Turks like me who are crying against this but their voices are not heard.” 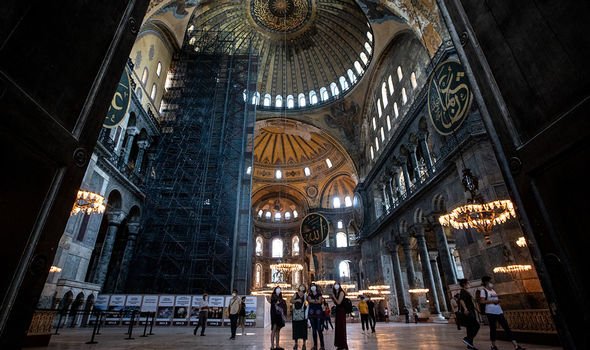 Hagia Sophia was founded in the year 537, when the church was built overlooking the Golden Horn harbour by then-Byzantine emperor Justinian ruled.

The church was briefly made into a Catholic cathedral after Crusaders captured the city in the 13th century.

But years later it was turned into a mosque by Ottoman Sultan Mehmed II following his army’s recapture of Constantinople – now known as Istanbul – in 1453.

By 1934, it was changed into a museum as Turkey made a bid to become more secular.