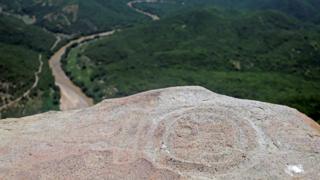 Two pre-Hispanic carved stone monuments believed to date back more than 1,500 years have been uncovered on a mountaintop in central Mexico.

Archaeologists say the site – which in its heyday would have had seven pyramids, a ceremonial area and a games court – was found by villagers.

It is thought to have been built by the Zapotecs, who lived in the southern highlands of what is now Mexico.

The carvings suggest it may have been dedicated to the god of the underworld.

Archaeologists think it lay hidden since the 6th Century. Access to the site is along a rocky path, which takes two and a half hours to climb.

It was found by residents of the nearby village of Santa Cruz Huehuepiaxtla.

What has been found?

So far, two stelae (etched stone panels), as well as smaller carved stones, have been found.

One of the carvings is of a figure with horns and claws wearing a loincloth. Others are believed to represent an iguana, an eagle and female figure thought to be a deity resembling a bat.

José Alfredo Arellanes, from Mexico’s National Institute of Anthropology and History (INAH), says 87 glyphs, or symbols, have been found so far.

Mr Arellanes says initial investigations suggest a ceremonial area, flanked by temples and the homes of the rulers, would have been located at the top of the mountain.

The archaeologist thinks the site would have also had seven pyramids and a court to play pelota, a game in which players used their hips to propel a rubber ball through stone hoops.

Puebla is an area rich with archaeological ruins but locals said they were proud to have led archaeologists to this latest find.

Experts are still analysing the finds but said the site could have been built by people belonging to the Zapotec civilization, also known as the “Cloud People”, which originated in the area 2,500 years ago and had a sophisticated architecture and style of writing based on glyphs.

Those following the Zapotec religion believed in lots of gods, many of them associated with agriculture or animals.