MOSCOW (Reuters) – Russian President Vladimir Putin on Tuesday opened the door to constitutional changes that would allow him to remain in power until 2036, but said he favored term limits once the country became politically “mature”. 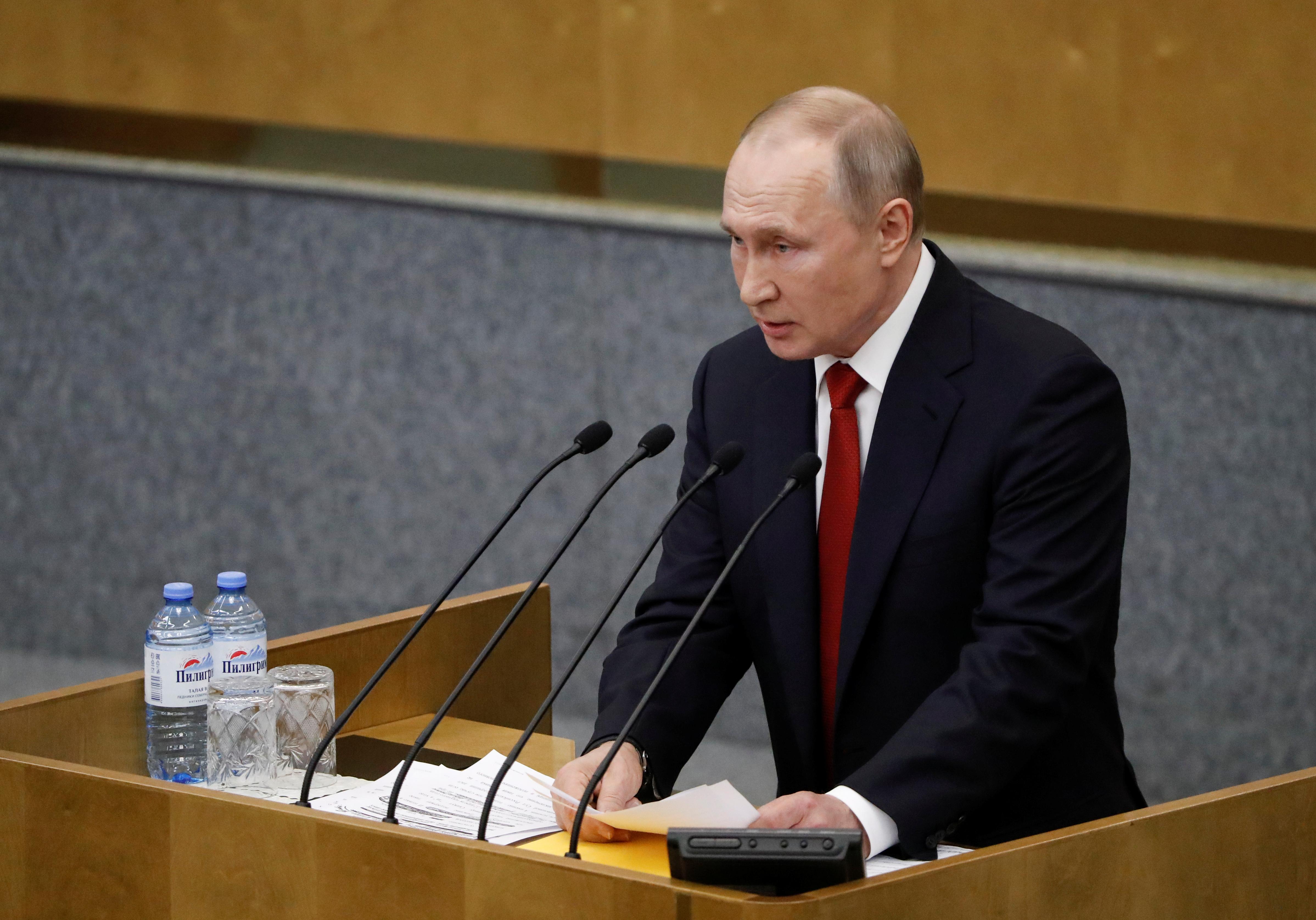 Putin, who in January unveiled a major shake-up of Russian politics and a constitutional overhaul, is required by the constitution to step down in 2024 when his second sequential and fourth presidential term ends.

But addressing the State Duma, the lower house of parliament, he gave his qualified blessing to a proposed change to the constitution that would formally reset his presidential term tally to zero.

“The proposal to remove restrictions for any person, including the incumbent president … In principle, this option would be possible, but on one condition – if the constitutional court gives an official ruling that such an amendment would not contradict the principles and main provisions of the constitution,” Putin said.

He said U.S. President Franklin D. Roosevelt serving four terms because of the upheaval his country was going through at the time was an example of why presidential term limits were sometimes superfluous.

“In conditions when a country is experiencing such shocks and difficulties, of course … stability is perhaps more important and must be a priority,” he said, adding that Russia was still recovering from the 1991 collapse of the Soviet Union.

If, as Putin’s critics suspect, the constitutional court gives its blessing to the amendment and it is backed in a nationwide vote in April, Putin could serve another two back-to-back six year terms.

Were he to do that, and his health and electoral fortunes allowed, he could stay in office until 2036 at which point he would be 83.

Kremlin critic and opposition politician Alexei Navalny said he believed Putin was now set to become president for life, while Navalny’s ally, Ivan Zhdanov, decried the move as tantamount to a constitutional coup.

His stance handed him the option to run again in 2024 should he choose to do so and removed political challenges raised by what had been seen as his last term in the Kremlin, she added.

“The successor issue disappears. The issue of Putin as a lame duck disappears,” said Stanovaya.

Opposition activists said they planned to protest against what some called a rewriting of the constitution in the interests of the ruling elite. One group said it had applied for permission to stage a demonstration on March 21.

A former KGB officer, Putin, who is serving his fourth presidential term and has also served as prime minister, has dominated the Russian political landscape for two decades.

Putin has not spelled out what his plans for the future are, but he has said he does not favor the Soviet-era practice of having leaders for life who die in office.

Putin appeared before parliament on Tuesday after Valentina Tereshkova, a lawmaker from the ruling United Russia party and the first woman in space, told parliament she was proposing to amend the constitution in a way that would reset his presidential term count to zero. 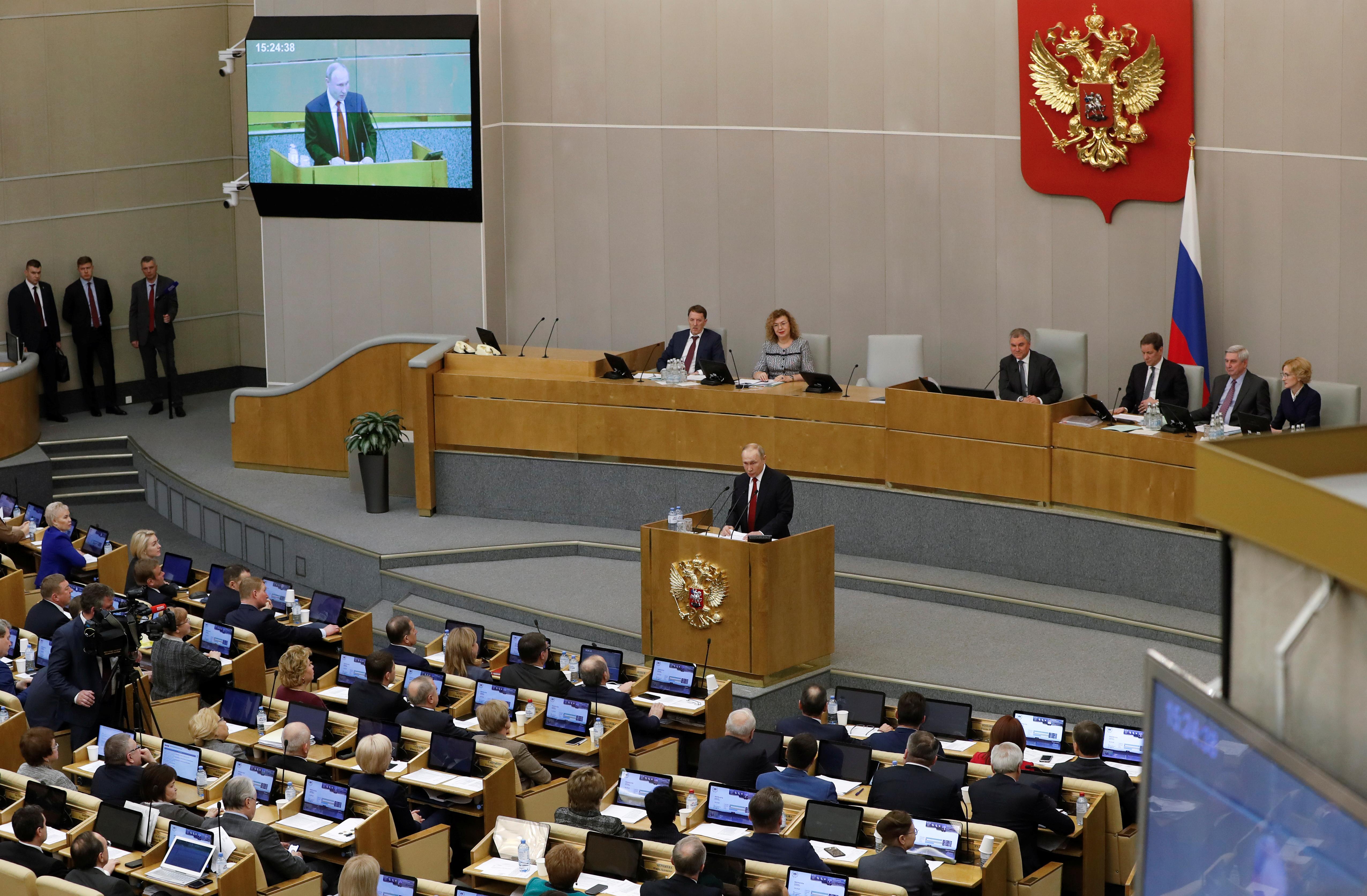 Explaining the surprise move, Tereshkova said voters had told lawmakers in recent meetings that they wanted Putin to “stay nearby”, whatever constitutional changes occurred.

“What if suddenly something goes wrong?” asked Tereshkova. “He (Putin) will be able to support, help and have our backs.”

Her proposal came as parliament was examining and preparing to vote on Putin’s constitutional shake-up in the second of three readings, something it later did, approving it and Tereshkova’s amendment.