Ukraine: Donbas region on the brink of collapse

Severodonetsk had been the focus of Putin’s invasion goals for weeks. His forces’ victory there means 95 percent of the Luhansk province, one of the regions which makes up the Donbas, is under Russian and local separatist control, while about half of Donetsk, the second Donbas region, has been taken too.

The fall of Severodonetsk, once home to more than 100,000 people and now reduced to a wasteland of rubble by Russian artillery, is the Kremlin’s biggest win since taking the port of Mariupol last month.

In his Saturday night address after control of the city was confirmed, President Volodymyr Zelensky said it was a difficult day, “morally and emotionally”, for his country.

However, according to the Washington-based Institute for the Study of War (ISW), any further successes in Donbas — an “unconditional priority” in Putin’s war ambitions — are reliant on whether the units that fought in Severodonetsk can recover and transfer strengths to the rest of the offensive, of which Lysychansksit is due to be a key target.

The ISW said in a military assessment on Tuesday: “The pace and outcome of the next phase of the current campaign may depend in part on Russia’s ability to recoup combat power from the forces that participated in the Battle of Severodonetsk.”

READ MORE: ‘Putin wouldn’t have invaded if he was a woman’ Boris makes stunning claim on Ukraine war 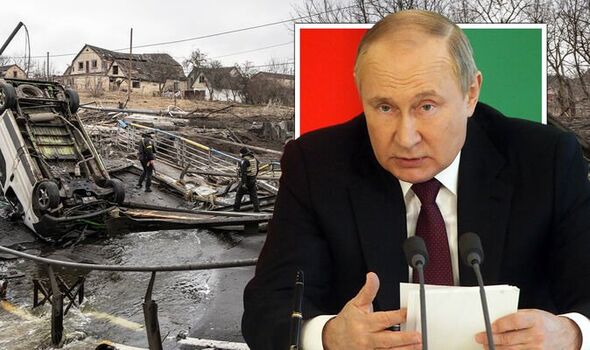 Severodonetsk and Lysychansksit sit on the Siversky Donets river, which has been the scene of a series of rather costly battles for Moscow.

With all bridges between the two cities destroyed, the curve of the river presents a significant natural barrier to any Russian advance.

But “the remaining Russian forces in Severodonetsk will need to cross” it, the analysts said, if they want to “participate further in the Russian offensive”.

The assessment continued: “This movement could require some time since the Russians destroyed the three main bridges across the river near the city.”

One attempt to cross it a month ago cost Putin’s men an entire battalion tactical group.

Hundreds of soldiers and dozens of armoured vehicles were wiped out by Ukrainian artillery as they attempted to reach the other side. 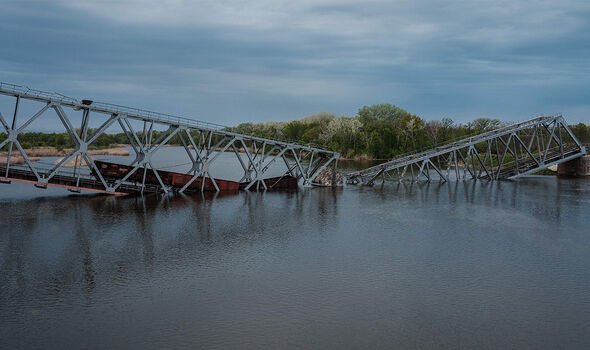 The ISW added: “Russian forces that have engaged in continuous offensive operations in Severodonetsk will also require some time to restore combat capabilities before participating in an assault on northern or northeastern Lysychansk.

Ukrainian defenders, who are set to continue to show fierce resistance, are expected to take advantage of any signs of exhaustion by the enemy.

Kyrylo Budanov, head of Defence Intelligence of the Ukrainian Ministry of Defence, described the fall of Severodonetsk as a means for Kyiv’s forces to regroup on higher ground in neighbouring Lysychansk.

He said: “The activities happening in the area of Severodonetsk are a tactical regrouping of our troops.

“This is a withdrawal to advantageous positions to obtain a tactical advantage.”

Ukraine: Aftermath of Russian strikes on building in Kyiv

However, a spokesman for Kremlin-backed fighters claimed Ukrainian forces’ attempt to defend Lysychansk was “pointless and futile”.

Andrei Marochko, a representative for the Moscow-backed army in Luhansk, said: “At the rate our soldiers are going, very soon the whole territory of the [self-declared] Luhansk People’s Republic will be liberated.

“Our troops are already in the city areas of Lysychansk. So we can say we fully control all movements of Ukrainian troops.”

Putin’s army separately targeted Kyiv with a series of airstrikes on Sunday in what the city’s mayor, Vitali Klitschko, described as “maybe a symbolic attack” ahead of a NATO summit taking place in Madrid this week.

The attack killed at least one person and wounded six others, including a seven-year-old girl.

Firefighters put out a fire in a badly damaged nine-storey residential building in the central Shevchenkivskiy district, while Andriy Yermak, head of the president’s administration, said on Twitter a missile had also damaged a kindergarten.

The strikes, at 6.22am, extended far beyond the capital, with other areas impacted too. These include the central city of Cherkasy, where one person died, and the north-eastern Kharkiv region.

Meanwhile, an attack on a shopping centre in the city of Kremenchuk a day later drew a wave of global condemnation as a Russian missile strike killed at least 18 people and injured dozens.