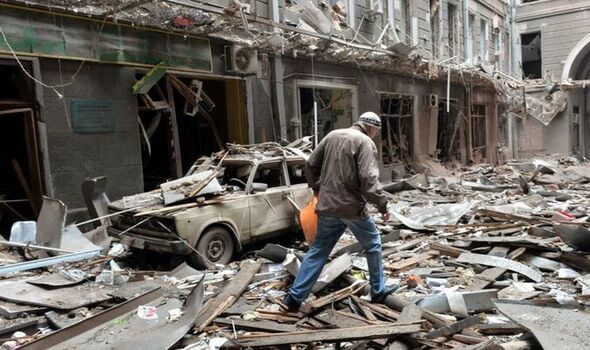 Ihor Terekhov said the Russian military was putting the eastern Ukrainian city under relentless bombardment. He added: “As of today, 48 [of the city’s] schools have been destroyed.”

Kharkiv has a peacetime population of about 1.4 million, though the exact number of civilians who have fled is unknown.

The city has been hard-hit in recent days as Russian forces focus their attacks, with nightly airstrikes and shelling.

The news follows a growing litany of tragic attacks that have led to renewed calls for Vladimir Putin to be tried for war crimes.

Ukrainian officials also accused Russian forces today of hitting a psychiatric hospital near the eastern Ukrainian town of Izyum, in the Kharkiv region.

Oleh Synegubov, governor of the region, said 330 people had been at the hospital at the time, some of them confined to wheelchairs or unable to move, and that 73 had been evacuated.

The number of casualties had yet to be established, he said.

Mr Synegubov described the strike as “a brutal attack on civilians”, adding: “This is a war crime against civilians, genocide against the Ukrainian nation.”

Meanwhile, in Dnipro, south of Kharkiv, at least one person is dead after Russian air strikes hit near a nursery and an apartment building, the city’s emergency services said.

In the port city of Mariupol, authorities say Russia dropped bombs on the city again yesterday, a day after hitting a maternity hospital in a “depraved” offensive.

As the humanitarian crisis grows, Iryna Vereshchuk, Ukraine’s Deputy Prime Minister, said it was hoping a corridor would be opened today to allow civilians to leave Mariupol.

Russia has said it would declare another ceasefire to allow civilians to leave from battleground cities including Mariupol, Kharkiv and Kyiv.

However, previous ceasefires have been short-lived and Russia’s humanitarian corridors were criticised by Ukraine for leading directly to Russia and Belarus.

Satellite imagery also suggests a Russian military column threatening Kyiv had dispersed to new positions, possibly in preparation for a fresh assault on the capital.