Prince Charles and the Duchess of Cornwall have taken in the Great Sphinx while on a visit to Egypt.

The royal couple arrived in the country after visiting Jordan.

Prior to visiting the ancient monument, the pair met with the Egyptian ruler. According to the Encyclopedia Britannica, the Sphinx was built around 4,500 years ago – from around the time of King Khafre.

After arriving at the airport in Cairo, Charles and Camilla travelled to the Al-Ittihadiya Palace to meet Abdel Fattah al-Sisi and First Lady Entissar Amer.

Mr al-Sisi, a former field marshal, came to power in 2013 after leading the army to overthrow Mohamed Morsi, the country’s first elected head of state. 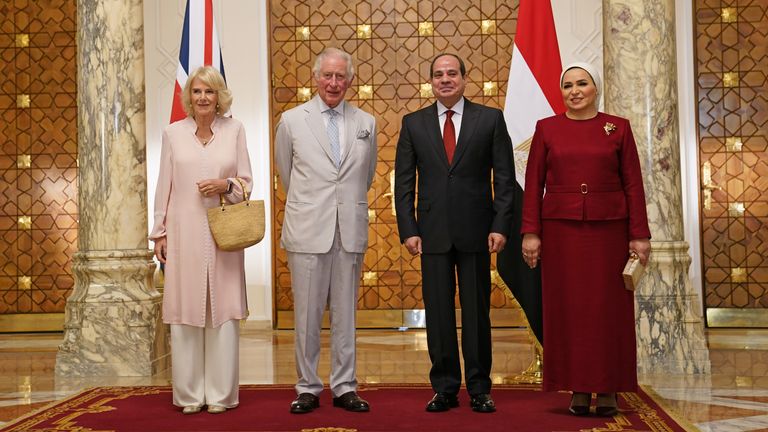 At the palace – which used to be a hotel – the two couples posed for pictures before splitting for talks.

Prince Charles and President al-Sisi spoke for around 40 minutes.

With the UK handing over the presidency of the UN climate summit, COP, to Egypt, it is thought the pair would have spoken about the subject.

Meanwhile, the Duchess of Cornwall and Ms Amer spoke separately.

Later, the prince met students who were studying at the Al-Azhar Mosque. “The most important thing is to emphasise what we have in common not what divides us,” the prince said to one group of women. “Do remember that we share so much.”

He also attended a multi-faith reception with Grand Imam Sheikh Ahmed el-Tayeb and Archbishop of the Anglican Province of Alexandria Dr Samy Fawzy.