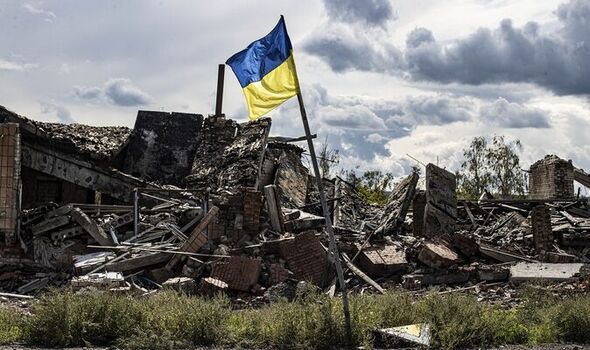 Russia had used Lyman, in Donetsk, as a logistics and transport hub, and had 5,000 troops stationed there. Its fall was last night said to be a “major setback” for the Kremlin.

Last night, standing on the bonnet of a military vehicle, one Ukrainian soldier declared: “We’re unfurling our state flag and establishing it on our land. Lyman will be Ukraine.”

It came the day after the Kremlin proclaimed that a swathe of Ukrainian territory – including Donetsk – was now part of Russia.

Following the latest battlefield embarrassment, Ramzan Kadyrov, head of Russia’s region of Chechnya, wrote on social media site Telegram: “More drastic measures should be taken – right up to the declaration of martial law in the border areas and the use of low-yield nuclear weapons.”

Putin’s move on Friday to annex territory was denounced in the West as a violation of international law. Moscow staged so-called referendums in four Ukrainian regions: Donetsk, Luhansk, Kherson and Zaporizhzhia. They were denounced by Kyiv and other Western governments as illegal and coercive.

Details also started to emerge of a recent deadly attack on a convoy of Ukrainian civilians near Kupiansk in eastern Ukraine. Kharkiv authorities said 24 people, including 13 children and a pregnant woman, were shot dead in their cars by Russian troops.

Moscow’s annexation of the four regions followed on from explosions at the Nord Stream gas pipelines from Russia to Europe.

Western leaders suspect the leaks discovered on the pipelines last week were the result of blasts caused by Russia in an attempt to ratchet up pressure on Europe over fuel supplies. Prime Minister Liz Truss echoed Nato sentiments that they were “clearly an act of sabotage”.

While Russia denies responsibility, the event has raised concerns about the safety of other crucial infrastructure, such as offshore pipelines, undersea communication cables and wind resources, which are generally considered to be vulnerable.

The Sunday Express has learned of a Nato briefing last night suggesting the 750-mile Russian pipelines could have been constructed with back-door booby traps, allowing Moscow to sever them in times of war, though this is just one of many working hypotheses.

In a meeting with Danish PM Mette Fredriksen on Friday, Ms Truss said both countries would be working together under the UK-led Joint Expeditionary Force to contain any future threats.

The UK will also be assisting Norway to beef up its oil and gas security.

Royal Marines from a specialist counter drone commando unit have been put on standby to join Norwegian forces, who have already deployed to oil and gas platforms across the North Sea.

Many of Nato’s maritime assets are already planned to be in the North Sea next week for military exercises. But extra measures are being prepared.

The Royal Navy will deploy a survey vessel which carries the fleet’s autonomous mine hunting force.

And Astute-class hunter-killer submarines have also been placed on high alert.

Because of its geography, the UK is a transatlantic “hub” around which hundreds of fibre-optic cables pass along the sea bed to Europe.

In June, Admiral Sir Tony Radakin, head of Britain’s Armed Forces, warned about the “phenomenal increase in Russian submarine and underwater activity in the past 20 years”.