Crimea: Smoke appears to rise from area of Bakhchysarai district

According to a secret document dated August 22 Russia has already moved 10 of its best fighter planes six Su-35S and four MiG-31BM jets out of the peninsula. It is expected that the rest of the Russian Air Force will also be evacuated, according to the report seen by Insider.

The NATO document said that the Belbek airfield close to Russia’s Black Sea Fleet HQ in Sevastopol still has a number of military aircraft.

However it is thought that these aircraft are not sufficient to maintain a consistent level of air support in the region.

Russia has deployed an increasing number of surface-to-air missiles and anti-tank weapons systems in an attempt to prevent further strikes, according to the document.

In the last few weeks there have been a number of attacks on the Black Sea Fleet at Sevastopol and an airbase at Saki which resulted in the destruction of nine Russian jets and an ammunition depot close to Dzhankoi. 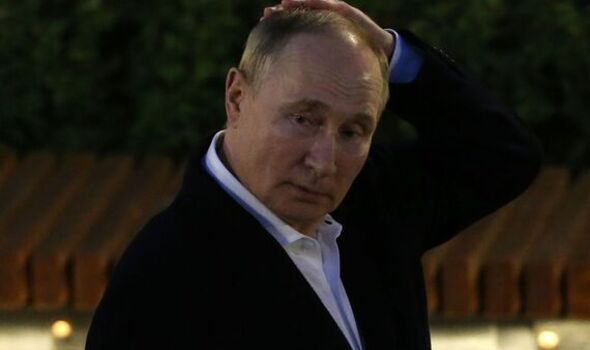 Footage from the Saki attack showed plumes of smoke rising from the base as beachgoers fled from the nearby shores.

Russian tourists piled into cars causing huge queues on local motorways in a desperate attempt to escape Crimea, an area previously untouched by the war.

Although Ukraine has not taken responsibility for the attacks, multiple sources which have included Ukrainian officials have indicated that Kyiv’s special forces are likely to be behind the attacks.

According to the British Ministry of Defence (MOD) “more than half” of the combat jets stationed at the airbase were destroyed in the August 9 attack.

The recent strikes demonstrated Russia’s vulnerability in an area that was previously considered safe as well as Ukraine’s ability to strike behind enemy lines.

“The incidents have been having a material effect on Russia’s logistics support, but as importantly, there’s a significant psychological effect on the Russian leadership.”

The official added that the attacks had forced the Black Sea Fleet to adopt a defensive posture.

They had also severely reduced Moscow’s ability to launch an amphibious assault on Odessa which could cut off most Ukrainian access to the sea.

It comes as the Zaporizhzhia nuclear plant came back online on Friday after the facility was severed on Thursday, according to Ukrainian state energy body Energoatom.

The operator said the plant came back online at 2:04pm local time.

Ukrainian President Volodymyr Zelensky said Ukrainian nuclear experts had managed to protect the plant “from the worst case scenario which is constantly being provoked by Russian forces”.

However he added: “I want to underline that the situation remains very risky and dangerous.

“Russia has put Ukrainians as well as all Europeans one step away from radiation disaster.”