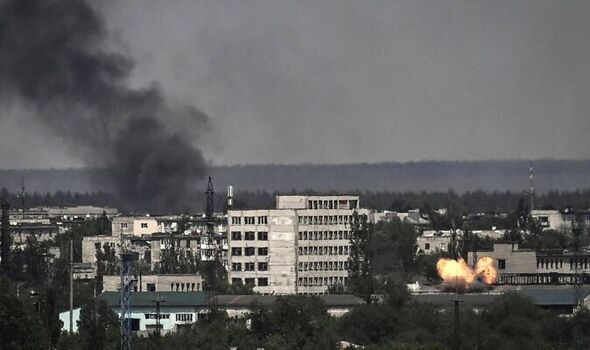 Vladimir Putin’s commanders are “throwing everything” at taking the heavily besieged city, which has now seen 90 per cent of homes damaged and is entirely without electricity or water, authorities there said.

But British intelligence yesterday suggested that the cost to the Kremlin of securing Severodonetsk, seen as a vital communications hub in the east, has been extremely heavy to Putin amid fierce defence from the Ukrainian army,

In its latest intelligence briefing, a spokesman for the UK’s Ministry of Defence said: “Russia has likely suffered devastating losses amongst its mid and junior ranking officers.

“The loss of a large proportion of the younger generation of professional officers will likely exacerbate its ongoing problems in modernising its approach to command and control.”

The briefing explained that a lack of experienced commanders was “likely to result in a further decrease in morale and continued poor discipline”.

But Ukraine is also suffering heavy casualties, and Yuriy Sak, an adviser to the country’s defence minister, yesterday warned that Russia was “trying to encircle and destroy small pockets” of Ukrainian troops.

“The situation seems to have been stabilised by the Ukrainian armed forces, they are defending the areas [they hold],” he said

“The Russian aggressors have much more fire power, much more heavy artillery; they’re pummelling those areas 24/7 without stopping, and of course they’re hitting civilian houses, civilian infrastructure as well as the Ukrainian army.

“The situation is very, very serious – and of course the Ukrainian armed forces continue to expect the delivery of more heavy weaponry which we have been requesting from the West for a long time now.”

Authorities in Severodonetsk said that such was the intensity of the relentless Russian bombardment that home forces were no longer bothering to count the spiralling number of casualties.

And military expert Professor Michael Clarke, of King’s College London, said that Ukrainian forces now faced a crucial decision about whether to try and save Severodonetsk – which he said would soon be surrounded on all sides – or withdraw to safer ground further west.

“They seem to want to fight it out,” he said, adding that the battle over the city is dominated by its river which runs to the west.

“West of that river the Ukrainians have about four brigades.

“The Russians are trying to get in behind them. If they do, those brigades will be in serious trouble.

“Those four brigades can keep Severodonetsk just about supplied.”

The ongoing ferocious fighting in the east came as Russia announced that the  ‘liberation’ of Donbas was now its key priority.

Mr Lavrov said that taking control of “the Donetsk and Luhansk regions, recognised by the Russian Federation as independent states, is an unconditional priority”.

He also denied speculation that President Putin was ill.

In an interview with French television, Mr Lavrov said that the Russian leader appeared in public every day, and no sane person would see any signs of an ailment.

“You can watch him on screens, read and listen to his speeches,” he added.

“I leave it to the conscience of those who spread such rumours despite daily opportunities to assess how anyone is looking.”

There has been increasing speculation that Putin, who turns 70 this year, may be suffering from ill health, possibly cancer.

This grew when British intelligence sources were quoted telling media outlets that Putin was seriously ill in the last week.

But after dismissing the rumours, Mr Lavrov said the “liberation” of the eastern region was an “unconditional priority” for Russia.

He repeated the Kremlin’s widely discredited line that Russia is fighting a “neo-Nazi regime”.

Mr Lavrov told TF1 that winning in “the Donetsk and Luhansk regions, recognised by the Russian Federation as independent states, is an unconditional priority”.

Meanwhile, Ukrainian President Volodymyr Zelensky met troops in the heavily shell-damaged city of Kharkiv at the weekend – his first official visit to the east of the country since the Russian invasion.

He thanked the troops, handed out medals, and said they were facing an “indescribably difficult” situation.

But Mr Zelensky warned that Russia has now lost “its own future and any cultural ties to the free world”.

And he addressed EU leaders yesterday again calling for new sanctions against Russia.

The address came as EU leaders met to again discuss a total ban on Russian oil imports, with but Hungary’s opposition still remaining an obstacle.